The Sarawak state government has found fault with two landmark High Court judgments that upheld native rights towards their customary land – and says it will appeal. 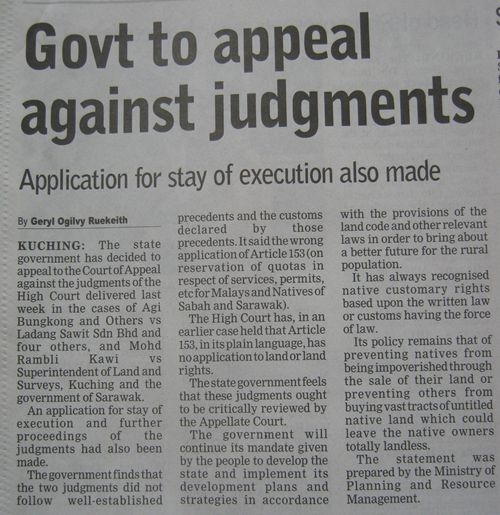 In both cases – Agi Ak Bungkong & Others v Ladang Sawit Bintulu Sdn Bhd and Mohd Rambli Kawi v Superintendent of Lands & Surveys Kuching Division and Another – Justice Datuk David Wong had ruled on 21 January that the respective communities had proven that they have native customary rights over the disputed land. He awarded them damages and costs.

The Sarawak state government’s decision to appeal was not unexpected. But what raised eye-brows was the language the government used in a press statement announcing its decision.

The State Government has decided to appeal to the Court of Appeal against the Judgments of the High Court delivered last week, in the cases of Agi anak Bungkong and Others v Ladang Sawit Bintulu Sdn Bhd and 4 Others, and Mohd Rambli Kawi v Superintendent of Lands & Surveys, Kuching and Government of Sarawak. Application for stay of execution and further proceedings of the Judgments had also been made.

The Government will continue with its mandate from the people to develop the State and implement its development plans and strategies in accordance with the provisions of the Land Code and other relevant laws in order to bring about a better future for the rural population. The Government has always recognized native customary rights based upon the written law or customs having the force of law. Its policy remains that of preventing natives being impoverished through the sale of their land or to enable others to buy vast tracts of untitled native land which could leave the natives selling such land to become totally landless.

How will the courts react to this?

A judge is expected to hear the state government’s application for a stay of execution and further proceedings on the Agi Anak Bungkong case early this week.

Just being tipped off that someone is from BN “fighting” PKR’s cause to further widen the non-existent misunderstandings in PR in Anil’s blog. The only trouble is this Tan and Zahrain guy! Ya Allah, almost got caught in this vicious and shameful trap! No more discussions with this guy so that he will not be able to get the publicity he requires. Let him spin on his own and fight on his own. Hahaha, thank you for awakening me fellow readers! When YAB Khalid, the much respected MB from Selangor, Syed Husin, the deputy chief of PKR, asked these people… Read more »

Oh yeah, whenever anyone dare to criticize DAP that guy must be from BN.

Why ain’t I surprised at that type of “reasoning“?

But then, all the DAP kakis are like that. 🙂

Mr Anil, Things certainly do not look good anymore, as they are going all out to win at all costs. It is indeed sickening the level they are willing to bring themselves to. Malaysians have never seen such bad intentions played out to the such low levels. Are they such bad losers? They know defeat is coming, it is coming, and they are now going all out to create chaos through PERKASA. The Rakyat must stay calm and resolute to vote these evils out for good. Let us hope the East Malaysians rise, and the greatest beneficiary of this rise,… Read more »

” Mr Anil, Things certainly do not look good anymore, as they are going all out to win at all costs. ”

The irony is, the above applies to both BN and DAP !

Win at all cost, including having Jeff Ooi (allegedly) spreading lies about PKR, a partner in the Pakatan Rakyat.

Win At All Cost, indeed !

Iron,
Look at facts & figures, you would never go far. Who are spreading lies? You know Zahrain got his Datuk Seriship, you know. On what basis…?
Tee Beng’s dad I heard is …
And Tee Beng, stockbroker…….You make your conclusion.

Who is spreading lies?…

They are spreading lies like “garbage from BN who are presently inside PKR are making trouble“.

But of course, they themselves conveniently forgetting the very fact that Jeff Ooi also came from the Barisan Nasional !

If everyone who came from BN automatically becomes a garbage, what about Jeff Ooi?

Folks, it looks like the DAP is the biggest culprits, it is best that PKR and DAP split. There is just no point continuing this marriage of convenience. DAP is such a dominant partner and had been “sodomizing” its partners especially PKR everytime. PKR is always a victim of sodomy. PKR must take the lead and Penangnites should from now on vote against the DAP and vote PKR only. Good luck PKR. Folks, I think it is best we do not say a word that is not good to PKR as someone is absolutely dissatisfied and angry. Hahaha, this is… Read more »

Got more important things to do than trying to get into a listless quarrel about sodomy and being “sodomized” with someone who is so keen to carry out PKR’s agenda to break up the PR. PKR is always about sodomy and being bullied, so pitiful! Even YAB Khalid, has asked those PKR YBs to leave if they are not happy, honourable man in the name of comradeship. … Here we have someone dead on defending these … , funny is it not? A party to the ploy to break PR? Does PKR matter at this point of time? From Sodomy… Read more »

Anil, Several days ago I made a request – since you are the journalist – for an independent piece of the PKR – DAP rift. You answered that there is no rift in between PKR – DAP. Then what is the thing about Jeff Ooi’s claim, and the rebuke from several PKR MPs? If there is no rift, what about the ongoing event? Anil, I am on the ground, hearing from both sides, and I know that the rift is there, and it is getting hotter by the day. If you are a journalist, as you have said you are,… Read more »

I did not say there was no rift. What I said was that I did not have enough information on the background. It’s probably an accumulation of many smaller grievances, that’s my guess.

Actually, there are a whole lot of things I should investigate!

I just wish I had the time. Unfortunately, I have to prioritise between different assignments.

Iron,
First, you must identify the key players. Then, you need to look at details. Who is the PKR chairman for Penang? It’s more of a right between Mansor & Zahrain.
Interesting question, why Anwar isolate Zahrain? Hmmm….

Nice try. But a strawman however nicely disguised is still a strawman. Please stop trying to portray this as an inter-PKR feud. Mansor is a nice guy. He is not fighting Zahrain. And Zahrain’s beef is not against Mansor either. It’s DAP which has started all these…. (Someone in DAP) has (allegedly) instructed the Lim Guan Eng’s administration to NOT providing anything to PKR’s MPs and state-representatives – with the exception, of course, if the PKR MPs and state-reps are EXCOs, then they are entitled to whatever a state exco is entitled, other PKR’s state reps and MPs get NOTHING… Read more »

For your weekend reading pleasure.

I am a Sarawakian!
I am from Ulu Baram, call Long Lama!

I am now in my 40s
When I was young, many many years ago
I can Swim in Baram River and come out clean
Now, when my son does the same
He comes out like Milo coated boy!

I am going back for CNY
will try to preach to the Long Lama Folk!

The real problem ;however, is the Sarawakians. They just got no (guts) to educate their parents n ancestors living in the long house to just kick out this (administration) out of the land of Sarawak. Until then, don’t dream lah sarawakians if you can even improve your socioeconomy.

If you see taib Mahmud, nora,… They don’t even care about us except for their stomach.