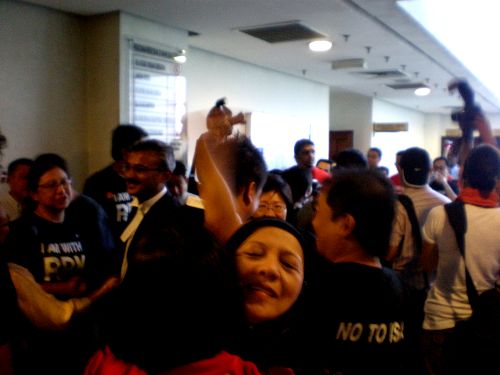 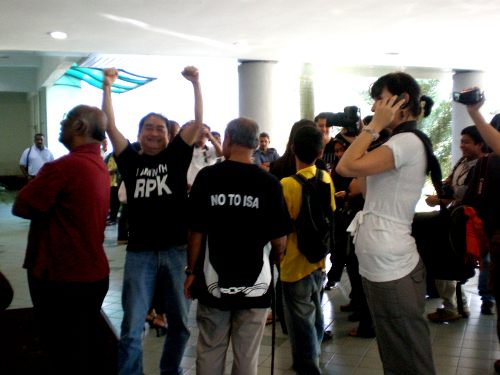 In a stunning development, Raja Petra is to be freed from ISA detention after a successful habeas corpus application.

Shah Alam High Court Judge Syed Ahmad Helmy Syed Ahmad ruled that Raja Petra’s detention was illegal and that the Home Minister had acted outside his jurisdiction when he issued a two-year detention order under Section 8(1) of the ISA.

“The atmosphere here is fantastic,” says [email protected], my contact at the scene. “When the verdict was read out, everyone erupted in jubilation so much so the judge had to admonish the crowd and remind them it was a court of law. We couldn’t help it though! A lot of people were crying openly.” 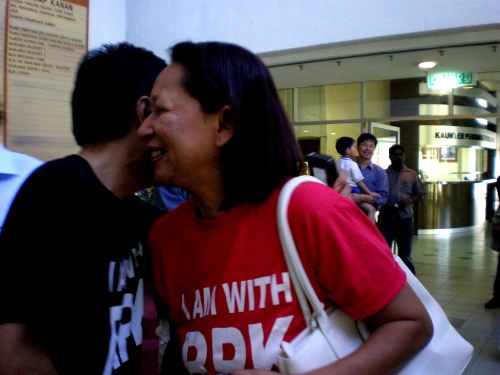 Marina rejoices after weeks of uncertainty and anguish

“RPK is still in Kamunting. They will have to send him here for the official release at 3.00pm.”

Some 80 to 100 people are now at the court premises. A group has gone to Kamunting to meet up with Raja Petra. Others have gone to celebrate and will be back at 3.00pm.

Sunday vigil (in PJ) will go on. Don’t forget the rest of the ISA victims still languishing in Kamunting.

The vigil must continue till the last ISA victim is out. That will be the deserved slap to Mahathirism.

It was mala-fide with a capital ‘M’.

This has also cast aspersions on Syed Hamid Albar’s credibility as Home Minister; he should just resign in disgrace.

huray!!! new beginning for malaysia.
a better tomorrow to all anak malaysia.
independant judiciary is what we need most.

All Anak Bangsa Malaysia rejoice with you, Marina and your family, Sir.

We honor and salute you.

Yes! Our Hero will be freed this afternoon.Thank God.

I like to congratulate the Shah Alam High Court Judge Syed Ahmad HelmiSyedAhmad for his wisdom Judgement and courage to stand up for it. Malaysians are proud of you. Such actions will help restore confidence in the courts.

RPK, you’re the air I breathe
Without you, I’m on oxygen support
After 54 days, I could again breathe
Hoping you, back as RPK (aka Gendolf) the White!

Praise the Lord. Justice still prevails. To the Judge who presided the case, You will be remembered and go well in history. You have brought back hope that not all is lost in Malaysian judiciary. You gave a fair judgement on earth and on the Day of Judgement of every soul, be assured this will be a plus point for you. Thank you for being brave to give a fair verdict. Wish you all the best, always and in all ways. RPK, There is serious worry from all of us who care about you that you may be re-arrested again.… Read more »

RPK, welcome home sir. WE rejoice with your family and all anak Bangsa Malaysia. And now, what’s the next step for the Home Minister. He should be prosecuted for acting beyond his jurisdiction. Can we see some justice, please?

From our hearts I thank the legal team that worked tirelessly for this victory.This is a victory not just for RPK but for all Malaysians who have been one way or the other thru prayers ,vigils been commited to fight for justice.We may be from different races but one man managed to keep us together in our hearts and minds where it matters most.God bless YM RPK and his loving family and God bless our beloved country.

Thank you, Goddess of Mercy.

This is not fair, you take someone inside(Prison) & after a good number of days/months/years, than you say as below stated.

“Shah Alam High Court Judge Syed Ahmad Helmy Syed Ahmad ruled that Raja Petra’s detention was illegal and unconstitutional and that the Home Minister had acted outside his jurisdiction when he issued a two-year detention order under Section 8(1) of the ISA.”

Than what about the Home Minister, no punishment ha!?
What the ….. I don’t think Mr Albar is man enough to resign. Adik Albar please grow up boy.

Now that RPK is out I think all bloggers should concentrate on educating the public that all the taxes paid by the rakyat belongs to the government and not to Barisan National,.Therefore whoever form the government has the right to make allocations for development etc etc. There is a subtle message from BN MP (whenever a project is completed and declared opened) that only BN can bring developments which is not true Also make abolition of ISA an election issue to increase the pressure on BN MP to support its abolition or be abolished fro Parliament. The abuse by those… Read more »

The Home Minister Syed Hamid SHOULD and MUST Resign NOW !! He is not fit to hold that Post. He should also be charged in the Court of Law for Abuse of Power, if he is in New Zealand, he is History,
the Public will demand for him to be SACKED and charges filed
against him. In New Zealand we would have pelted him with rotten Eggs!

I am in my work place now and I feel like screaming out loud over this wonderful news. However,I am holding back my sense of joy until I have official news that our beloved RPK has indeed walked out of Kamunting Hilton.
Now can those lawyers out there think of how we can file a suit against that … who locked RPK when it is out of his jurisdiction.
Welcome back to civilization after the long stay as a guest of that most uncivilized Mnister.

RPK has done nothing wrong. It is justified that he is released. We wish RPK the best of health.

RPK should NEVER have been sent to Kamunting in the first place. It was a despicable act on the part of the Home Minister.
I am so relieved and speechless with happiness. May the rest of the detainees be released soon. The candlelight vigils MUST go on, and with a sense of renewed purpose. People power works!!!
Cheers to RPK and his family…happy homecoming!!
MAKKAL SAKTHI!!!

Wait and see first if they will actually release him. Also, based on our Govt fine records, something else might happen. I hope i am wrong.

Yahoo!!!! Can self declare holiday or not? Want to go to SA court and welcome Pete back.

Welcome home RPK and curse those who put you inside.just be careful of the man who think upside down,for he could be thinking of a reason to rearrest you,like outside is not safe and he has to put you again to ensure your safety.or rather their own safety.

Righteousness and Justice are HIS throne!