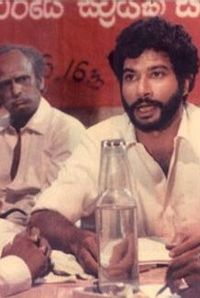 Richard de Zoysa was a well-known Sri Lankan journalist, author, rights activist and actor, who was kidnapped and murdered on 18 February 1990. He was the nephew of the Malaysian political scientist Dr Johan Saravanamuttu.

Richard’s death, widely believed to have been carried out by a death squad linked to elements within the Sri Lankan government, sparked outrage across the country.

His death was not in vain. It marked the turning point in the struggle against the death squads. His mother went on to become a committed activist for missing persons.

Richard acted in the movie “Yuganthaya”, which translates as “End of an era”, depicting the struggle of workers against a ruthless employer. Johan believes the film so irked the ruling regime at the time that it may have led to Richard’s murder.