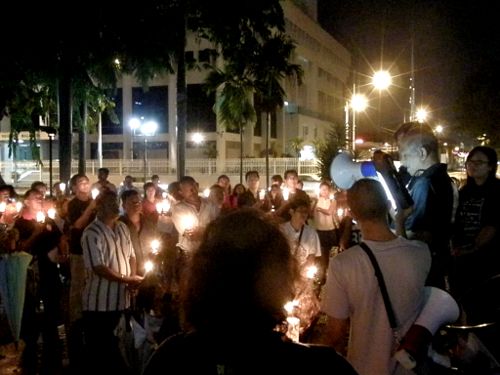 Aliran president P Ramakrishnan addressing the crowd at the vigil 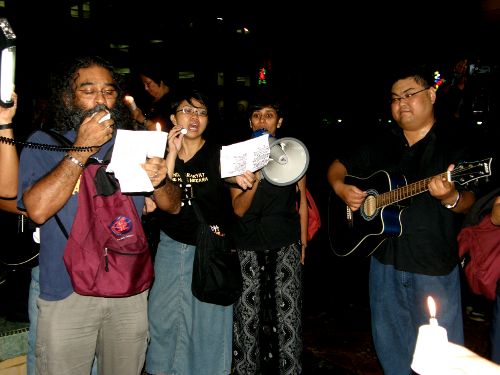 Music and song lifted the spirits of those present 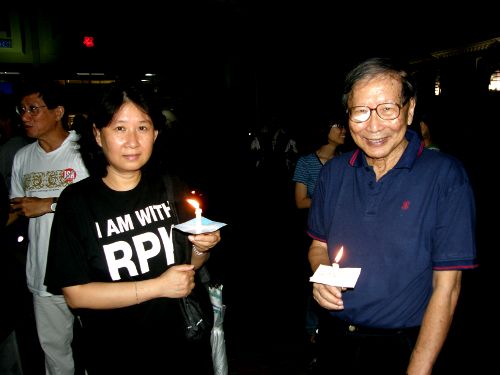 Heavy rain last night failed to deter some 150 people from turning up for the Friday candlelight vigil in front of the Dewan Sri Pinang. The downpour, which thankfully cleared up by about 9.10pm, did not dampen the spirits of Penangites who once again turned up to call for the release of all ISA detainees.

Among the speakers were Aliran president P Ramakrishnan and Bukit Mertajam MP Chong Eng, who will be holding a similar vigil tonight at her service centre on the mainland.

The spirited youngsters representing the Abolish ISA Movement (GMI) led the crowd in chanting “Mansuh, Mansuh!“, to which the crowd responded, “Mansuh ISA!“. They also proclaimed “People Power!” in four languages. When it came to Tamil, they yelled “Makkal Sakthi!” and the conspicuous band of Makkal Sakthi supporters clad in orange T-shirts roared back “Makkal Sakthi!” in approval.

A few participants came up front to read a poem, croon an inspirational song and explain why they wanted the ISA abolished.

Plainclothes police were more conspicuous this week as they walked around busily filming the crowd and snapping pictures. I suppose the idea is to deter people from coming to such events, but to the credit of the participants, no one flinched. In the past, such snapping of pictures had more of a ‘Big Brother’ effect. But these days, with almost every other person holding up a camera, such scare tactics appear to have lost some of their impact.

denone, the “Free RPK” banners are brought by the participants of that vigil, not by GMI who were the organisers. GMI has always pushed for equal action for all detainees – which is to free them; and also to abolish ISA.

If people want to bring their own Free RPK banners, then we let them; but we also encourage them to consider our views.

Why don’t you come for the vigil and bring your own banners and supporters?

Anil, I posted my reation to this posting last night. It was not offensive by any standard, but just my two sen analysis of why only 150 (by your count, it could have much less) turned up. But you decided to delete it from your blog. I fully understand you have eveyrright to your blog, but it goes to show that you cannot tolerate dissent views. There’s no such thing as free speech and freedom of expression when it comes to ideas, opinions and thinking that are different from yours. That’s the reality… Just to let you know, Denone, I… Read more »

ya thank god the rain stopped at near 9.00am… just in time for the vigil to begin. this week’s vigil was better than last week but i hope the coming week, being the last (friday again, 17 oct) will be even much better.

btw i had blog about the vigil on friday night immediately after coming home from the vigil but seems that something’s wrong with my blog, it did not turned up.

BN’s reputation has terribly gone down. Support for UMNO has diminished. Only about 30 per cent of the Malays now support UMNO. The other 70 per cent support PAS, PKR and other parties. The bulk of urban Malays go for the opposition. If PKR can tackle the rural voters, UMNO will fail deplorably. Only the fish heads remain in Gerakan, MCA and MIC. The bulk of members have left them. The media is highlighting these few heads. Sorry for them. The country’s economy soon will decide the fate of BN. To save their image now is to RELEASE ALL THE… Read more »