The magistrate hearing a case involving a dozen reformists who protested in 2000 at restrictions imposed on Harakah has acquitted all the accused. 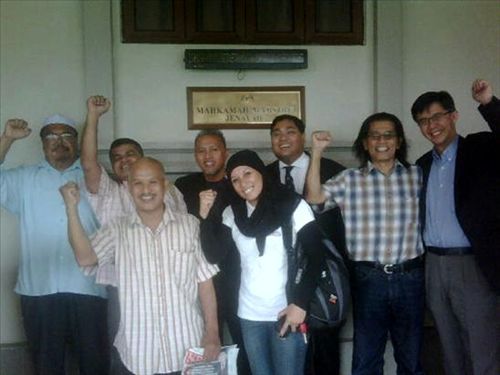 The reformasi supporters had protested against a restriction slashing the frequency of the Pas newspaper from twice weekly to once a fortnight.

Of the 12 charged, one had already passed away.

The DDP had subpoenaed 11 witnesses but only two witnesses testified with no response from the rest, said Tian Chua.

The DPP wanted to proceed with the trial but defence counsel said that without the witnesses, there was no prima facie case.

Magistrate Siti Shakirah Mohtarudin then observed that the prosecution did not appear to be interested in pursuing this case seriously, according to Tian Chua. She then discharged and acquitted all the accused.

Anil, are you sure these people are reformists ? Looks to me like a bunch of political party members to me.

I am not sure about most of them, but in any case, political party members too can be reformists.

PAS members as reformists ? Fighting for Hudud law is now considered as a reform ? That’s news to me.

In that case, even Zul Nordin and Ibrahim Ali must be called as Tokoh Reformasi.

Action speaks louder than words! Let the readers judge what you say is correct or not! Who caned the 3 ladies for illicit sex? UMNo Baru? PAS?
You tell me!

Gerakan K, For your information, bro. You see, something is so seriously wrong with our education system. So worrying is the trend! What will happen to our future Malay children? They must be educated and brought up well in order for the country to progress as we need to them to progress together. But, the thing is , ai…. the Umno Baru Government is not helping them at all. How can we progress when the Malays are lacking behind? Please tell your political masters to please stop politickings and help the Malays la! UMNO Baru always cakap tak serupa bikin… Read more »

Reformasi just refuses to go away and continue to grow, like Altantuya Shariibu! I think Razak Baginda was a better political strategist, and that is to be honest! And the only good material, unless he maintains his middle path is Khairy Jamaluddin in UMNO Baru. Muhyddin should just give up his Education Minister post for Khairy, and let him improve the education system! I know many are against my opinion on Khairy, but, realistically, he is quality material, politics aside! The sad state of the education system, especially in Sekolah Kebangsaan is so shocking! Today, those in Chinese schools are… Read more »

Gerakan K, Bro, do not know whether you had read this article on FMT, just thought of sharing with you. http://www.freemalaysiatoday.com/fmt-english/politics/pakatan-rakyat/3097-8000-brave-rain-for-lightning-war-to-putrajaya Enjoy reading and cheers! Surprise, everywhere Anwar goes, the crowd is so huge and are such staunch supporters and will not move, even when it is pouring. It looks like the support for DSAI remains firm even with the spate of “resignations” and sacking from those PKR MPs! By the look of things, the new voters will decide whether we have a new Government! Those who voted PR in 08 will remain! Seems the sodomy 2 is again going… Read more »

Sure sounds like an accute case of “syiok sendiri” and singing in the dark. I wonder how much these people have been paid to attend and the cost of buses and other “incentives” and who picked up the tab. In any case, as usual, only the hard core Pakatan supporters would attend such meaningless functions. And admitted by one Pakatan leader in Penang, it is the same bunch of people travelling from one place to another. This can be seen from the car plates in any of these functions. At these sandiwaras won’t help Anwar and Pakatan, they are headed… Read more »

I wonder how much these people have been paid to attend and the cost of buses and other “incentives” and who picked up the tab. I supposed K… is speaking from experience ; experience he had in mic/umno/mca rallies. Recently I met a PAS man. He was very kind to ferry me to town where I had kept my car. We started talking about politics and people we knew…and it was such a surprise that we had friends in common. He told me that he often attended talks by well-known speakers and often driving hundreds of miles – ALL ON… Read more »

Mist, what you relate is really touching and a fact! Malaysians of all races are really very friendly towards each other, only the politicians separates us!

All of us really thought that we cannot talk politics with other races, but, now it is entirely different! People has awaken and they know who the evils are!