Is this what Najib means by ‘transformation’? Resurrecting and moving detention without trial to an existing law takes us back to the dark days of the Mahathir administration. 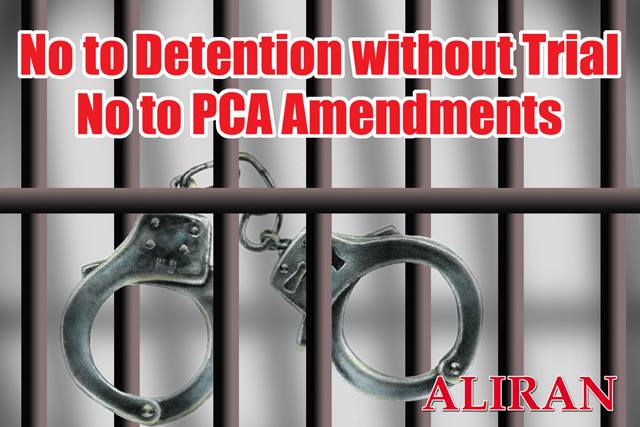 If the amendments are passed, suspects detained under the PCA could be held for two years without trial – and this could be extended. The proposed amendments do not allow for judicial review, except on procedural measures.

The government claims the amendments are needed to curb rising crime. But detention without trial is a poor substitute for professional investigative work that respects basic human rights.

Detention without charge or trial is a fundamental violation of our basic rights enshrined in international law and under the Universal Declaration of Human Rights.

In case, the BN government needs reminding, Article 9 of the Universal Declaration states that, “No one shall be subjected to arbitrary arrest, detention or exile.”

Now only were these laws used against threats to security, they were also used against progressive Malaysians working for change and reforms.

Now, the BN government wants to resurrect detention without trial under laws with new names? Sosma first and now PCA?

Members of Parliament, when it comes to the actual voting on the amendments in Parliament, you must vote according to your conscience and not be dictated to by your respective party whips.

The people will be watching closely how you vote to see whose side you are on – with the people or against. Better to be ousted from your party than betray the trust of the people.

The biggest meaning who are the idiots who said Zahid Hamidi was smarter or better than Hishammuddin?

The two guys are competing for the Umno VP position, as the son of Mahathir has entered the circus, so both try to outdo each. Zahid needs to redeem himself after the Sulu invasion at Lahad Datu. The keris-wielding Hisham’s days seems to be numbered as Zahid is indirectly telling us that Hisham was too soft towards criminals all these years.

This is outright misleading article aiming to confuse readers and thus discredit BN government effort to curb raising crime. According to Home Minister, preventive detention can be challenged in court. I expect this blog writer never mention this to ensure his agenda to confuse reader be successful.

Sure you know waht it means. It means didctatorship,corruption, cronynism and racism

Hawkers are now learning from McDonald’s.
You will have the option of UPSIZE with additional RM1.50.

What can our dear hawkers do when the so-called ‘affordable housing’ priced at rm400 000 in Penang ??? Raising prices is the way to go, no thanks to our stupid administrators that making Penang a place exclusive for the rich and famous ones.

Anil, Yes indeed. Just to share this… Nazri: Only one ISA replacement law | Free Malaysia Today – http://www.freemalaysiatoday.com/category/nation/2012/04/11/nazri-only-one-isa-replacement-law/ “This is the one we were talking about, supposedly called the anti-terrorism law,” “This is actually the Terrorism Act… we did not say it as such because we didn’t want to scare people, we didn’t want the same stigma the ISA had,” he said. Next to share this… 1. UK Terrorism Act 2006 – http://www.legislation.gov.uk/ukpga/2006/11/contents Home Office – http://www.homeoffice.gov.uk/publications/science-research-statistics/research-statistics/counter-terrorism-statistics/hosb0412/ 2. Operation of police powers under the Terrorism Act 2000 and subsequent legislation: arrests, outcomes and stop and searches, quarterly update to… Read more »

I do not know exactly what is ‘MAHATHIRISM’. But I do miss Tun Dr. Mahathir time in government.

Actually I do think there are circumstances for ISA but such draconian law is a a GREAT PUBLIC TRUST. UMNO/BN has abused that trust for decades until it has become a crutch to them. Even if the law is useful, UMNO/BN administration must live without it until they prove they can be trusted. Not insist they should be given the assumption. Its better for all of us to live behind locks doors and bars then to give UMNO/BN the power..

This will not make Malaysia appealling for foreign investors.

A RETURN TO THE ERA OF MAHATHIRISM!! YET we still have people who still regard this HAWKISH Tokoh as a statesman, not just BN members who care two hoods for the Rakyat but even some pseudo learned self-appointed NGO leaders( one such creep claims to be a Consumer Advocate, NOT CAP). This farcical Helmsman is having a field day for the return to His DARK ERA on the premise that we need a strong Leadership with a tight leash on the People

We have said no years ago. We had the promises by the Ah Cheap but I told all of you that he is not just a cheap but … lies and play dumb. This is what we have in a pm and armno who will arm with anything to strike you down

Let those BN b… do what they want – introducing/enacting new rules, regulations policies, laws, amendments etc. No point protesting. I have a very strong feeling that come GE-14 this time around PR will takeover Putrajaya. When that happens PR govt. must apply the very same amendments and laws on these … BN b…. Let them taste their own medicine. Cheers!

I do not trust the police for their intentions and purposes. It blackmailed the government against the implementation of the RCI recommendations for reform within the force. There have been far too many cases of police brutality and sheer cruelty. It has repeatedly shown itself to be a tool of politicians. Far too many of them are themselves (allegedly) involved in criminal acts. I do not have any faith in them as honest, sincere, or diligent. (Some) are racially and religiously bigoted (and)… do not have honest intentions.

Detention without trial over prolonged period without the opportunity of judiciary review. It looks, sounds, smells and feels like the despicable ISA except that it is called the PCA. Isn’t the detention of a person without trial for a lengthy period similar to his incarceration based the unproven allegation? What if the person is really innocent but detained due to sloppy investigation or foul play by some parties? I believe that some of the convicted criminals were given lessor punishment than what the this so-called PCA allows for. Maybe someone should ask Obama on his opinion of such laws during… Read more »

Our police need to improve their info gathering capability to gather evidence to prosecute the criminals, rather depending detention without trial for 2 years as an easy way out.

Please do not use any amended laws to arrest oppositions without trial. We are in a democratic country, opposition with different political views are not criminals.

Najib can make any promise no promise of his can or must be taken seriously, otherwise you will be very seriously disappointed. Just like his promise, before the GE, that he will build one million affordable houses if he is retained in Putrajaya. Now what has he done about this promise ? Instead he has just come up with this trillion ringgit bond buying project, how much of this trillion ringgit project will at the end go to the nation ? Every ringgit involved in the projects will no doubt be with inflated prices and most of all be given,… Read more »

Yes Ron 95 will go up but those UMNO idiots minister says it only affect only the rich as Ron 95 are used mostly by the rich. This is what we have for idiot and dumster as minister

Andrew I
Reply to  Yang

If you don’t like instant mee mini, you should migrate to Singapore – Gherkin K, CEO, Barang Naik Sdn. Bhd.

i think now everything become costly people kind of ignoring such act.

RON95 may go up more so people like us who struggle to survive in cosmopolitan lifestyle imposed upon us will be hard pressed.

Yesterday, ate late dinner at a kopitiam near Lam Wah Ee Hospital. Ordered a plate of Char Koay Teow with egg which costed Rm3.50. I almost cried like a small boy – the plate was the same size, but the food was abt 65% what it used to be! Even a small boy can finish such ‘resized’ Char Koay Teow. You know, size does matter when it comes to makan-makan. After that, all things are relative. That night, I practised picking the last bits of Koay Teow, Tau Geh & egg with oily chop sticks to justify my ‘crying’ dinner… Read more »

This is not price hike or barang naik.
It is merely reduction in serving for the same price.

Lets be honest, NO ONE believed Najib’s promises and sloganeering. All along its a matter of NOT calling him out on his fakeness and phoneyness. Why are people outraged now? Because now they have the evidence they were too cowardly to commit themselves without it before? The truth is people should have been outraged that they replaced Badawi with Najib. it was step backward from there already. That it has gotten back one full circle – well blame in on our lack of public will. But the worst is, the return to draconian ways is not even half of what… Read more »

This is a terrible dictatorship in practice !

Didn`t I tell all of you we have a bluff and deceiver PM. How many promises have been kept from prices of essential item to the rules of law such as this. Anyway be happy with BRIM that will keep you in crutches and be ruled under Mugabe style