The Penang Club has called off Kee Thuan Chye’s book launch-cum-forum, which was scheduled for today, for what appears to be a bizarre reason. 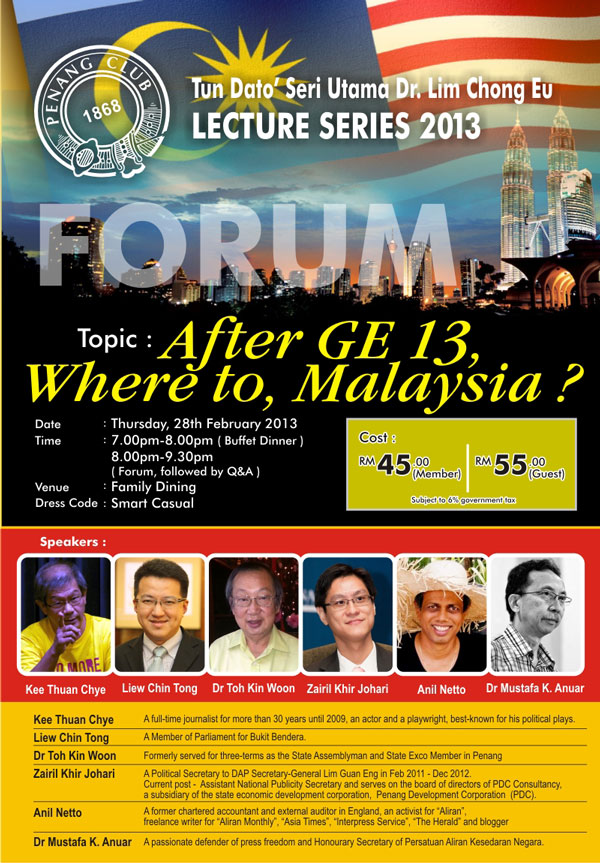 Among those who have spoken in the recent past at Penang Club are Ambiga and Tengku Razaleigh.

This is Thuan Chye’s statement:

The day before yesterday, I announced on my Facebook page that Penang Club had cancelled my book launch and forum at its premises scheduled for Feb 28, but I did not state the reason.

Since then, many people have been asking me why. So I’ve decided to explain what happened.

It was cancelled because Penang Club approached me at virtually the last minute to say they would not allow the Chief Minister of Penang , Lim Guan Eng, to officially launch my book.

They said they did not want to be seen to be politically aligned.

I refused to stand for this.

Penang Club knew from the start I had asked Guan Eng to do the honours but had said nothing against it till now.

Besides, he is the Chief Minister of Penang. And an honorary member of the club, to boot! What political alignment?

They said complaints had come from a few club members that the line-up of speakers of the forum did not comprise anyone from Barisan Nasional (BN). I told them we had approached BN politicians but they had turned us down. We had tried.

I could not understand why Penang Club was more concerned with the “few” complaints than the club members who had signed up to attend the launch-cum-forum. When I checked with the club last week, I was told 60 people had already signed up. Didn’t these people and their interest in the event matter?

More important, Penang Club had printed the poster advertising the forum and its speakers a month ago. This must mean that it had already endorsed the line-up. So what’s the meaning in coming up with this excuse?

Besides, the topic of the forum was a non-partisan one: “After GE13, Where to, Malaysia ?” This must surely be a topic most Malaysians would be interested in regardless of their political affiliation, mustn’t it?

I should also say here how the whole idea for the event came about.

A couple of months ago, Penang Club invited me to be a speaker on its Lim Chong Eu Lecture Series. I asked if they were paying a professional fee for it. They said no, that they would cover only transportation and accommodation. I told them they couldn’t expect people to do things for free. This, I said, was a Malaysian habit that needed changing.

So I offered them a deal. Why not host my book launch, which would be accompanied by a forum featuring other speakers, and I would waive my professional fee? They readily agreed.

I told them whom I would be asking to launch my book. There was no problem.

I then thought since it was a book launch, they would arrange for the media to cover it. But they said no. It would be a members-only event. No media allowed. I had to agree. I compromised. I kept my end of the bargain.

Now, if no media was going to be allowed, why should Penang Club be worried about Guan Eng launching the book? It wasn’t going to be publicly reported, anyway. I therefore saw no reason for their telling me not to have him launch my book. So I refused to entertain their condition.

I still don’t see it. I’m also exceedingly puzzled that the club would not allow the Chief Minister to officiate at an event it was hosting.

As far as I’m concerned, the Penang Club Committee did not keep its end of the bargain. The fact that the entire episode should end like this is nothing less than shocking.

Whatever the reason for the cancellation of the book launch and forum, it is a real shame. And yes, shocking too. I was looking forward to it. Also, one of the other speakers had turned down an important international engagement as consultant for a workshop because he was scheduled to speak at the Penang Club.

(As disclosure, Thuan Chye had kindly invited me to be one of the five speakers at the forum.)

Boo Yeang, thanks for your offer. Yes, if you can arrange it, I’d be delighted to hold it at the OFA. I hope it’s not being run by conservatives. Good to see you on this blog. I remember you as my senior at PFS.

I am now in JB Iskandar. Will do lobbying tomorrow.

Oh, er … Boo Yeang, as I live in KL, the sponsorship would need to cover my transportation to Penang and back, and also one night’s hotel accommodation. Thanks.

Thuan Chye, all we need is for OFA to confirm they can officially host your event. I can sponsor the event plus your expenses. Please plan ahead your date with the CM. Propose weekend 3pm or weekday 8pm. Free public talk and book launching (light refreshments and drinks free). Please avoid 24 March.

Boo Yeang, thanks for your generosity. I’ll ask the CM for a date.

Oops.. I spoke too soon !!
Kee Thuan Chye is an old-Free !!
And I remember you in the Ed Board during the 70s whenever I peruse through my late elder brother’s mags.. He’s name is Boo Soon Beng, avid photographer.. together with our cousin Siow Jin Keat 🙂

And Mr Khoo.. I remember you from my scouting days with the 8th GTS. You were always a regular feature with the PFS Rover Crew for any school scouting events 🙂

Pls check with Kee how about Old Frees Association sponsor a public forum n book launch for him with full press coverage? I am not a committee member but can help to arrange/encourage OFA to throw in free refreshments.

Would Penang Club have premier screening of ‘Tanda Putera’ in Penang if ‘instructed’ by BN via Finas?

Although the club’s name is “Penang Club”, it’s not a club for Penang Lang Penang Club is a club for bourgeoisie, people whose kaki tak pernah pajak bumi Till now I still do not understand why people want to go there to give speech in the first place What type of “honor” you think you gonna garner by speaking there? Appreciation by a group of self-selected bourgeoisie ? Who are you trying to kid here? Who cares about those bourgeoisie while this society, the Penang State, is built by REAL PEOPLE who toil day and night to make Penang a… Read more »

Yes indeed, it is very disappointing and sad..

As a member of the Royal Lake Club in K.L, I do frequent the our affiliated Penang.Club.

You be the judge.

Provide more details on the invitation to BN being turned down

The Club acted on the fears of cowards and charlatans.The Committee let members who signed on down.

Yes the wind of change from Perlis to Trengannu and down to Negri Sembilan, Malacca & Johore and east to Sabah where it will be No to BN

The Penang Club should close down! This is supposed to be a club for men of substance and dignity. Only men of honor do we expect to be members. Committee Members should be the epitome of this. This group of Committee Members have disgraced the club and made it to become an object of ridicule. They should RESIGN and go slither off to hide somewhere!

We should knwo that the club members are mostly ‘elite Penangites’ who have benefited from previous state government.

Once Penang club and the Penang swimming club was the bastion of the colonialists. No chinese were allowed. But that is old story. Now decorum and etiquette is being compromised in showing for the ruling chief minister. Who is playing politics ?

Thanks Anil, for bringing this story to us.

The cancellation and reason given will have given the event more attention than it could garner if it had went on. And ‘unfortunately’ the attention may or may not be the topic of the said event – something out of nothing, perhaps.

Stop kidding yourselves. It was a non event and the slide of hand shall go un-noticed or unheard off either by mainstream media or little coverage by alternative media to the general public.

The handful invited to speak would reverberate the incident and purported reasons thrown by Penang Club…but life goes on.

Similarly, most Penangites or infact Malaysians have seen and experienced the same….in disgus over the decades. A two party system or even a third force “Inisiatif Rakyat” would be hopefully a reality in Malaysia one day.

Its not the few complaints. Its the complaint from one of the higher up or something up the sleeve which the chairman must not offend

Hmm.. I’m sure Kee Thuan Chye will be able to find a venue that will give him a warm welcome + EVERYONE on the invited list !!

Smacks of “fear of the old bear” in the case of Penang Club.. survival instincts kicking in.. resulting in an act within their jurisdiction, yet smacks of lack in courage !!

Last Gherkin bastion. What do you expect? Like asking the Star to print something positive about PR.

Take away the wooden plank after crossing the bridge.

well… when Kee Thuan Chye offer the “exchange” for a colonisation era cheapo freebies mentality “club”, he should expect this.

Don’t u feel loosing face? Especially those 6 fellas on the poster. LGE not feel that much, maybe. Sue the club unless u guys are BN suppoters.

Actually, SL, I think it is the Penang Club that ‘loses face’ from this action.

Nice hand. If this can make u feel better. But, I still don’t exactly see how the club lose it face after few comments here & there. Not even a page or 2 appologise on BN’s newspaper.

I have totally no face if my leader lose face. Do u? Come on ppl, together we can help the rocket fly higher.

Mission Control to SS Wong. Over.
Where are you? Over.
Please come in. Over.
Do not pass Go. Do not collect $200. Over.

The point is this Anil, The action that Pg Club take reflex exactly like a political stand itself. Does it mean no politician can be a member of the club? Non political align does not equate Anti Gov’t Club, does it? Penang Club dude must decide and understand this basic.

If you just delve into it a little deeper, you would find that the complainants (if any) would have been the (a certain) type which sees red whenever LGE’s name is mentioned. If those miscreants were not in the picture, it is just the Penang Club Committee trying to curry favour with Najib and his BN goons in Penang. I find it extremely perplexing that a book launch cum forum is cancelled because the Head of State is the guest of honour. That too when members of the press are not invited. Obviously publicity for LGE or Kee Thuan Chye.s… Read more »