2317: Kit Siang observes: “This black episode symbolises 1st anniversary of Najib’s 1Malaysia. Will ask Najib n Hishamuddin in Parliament – what r both of u afraid of?”

2305: In his speech, Anwar has urged the authorities not to use the police to restrict the people’s freedom. Husam, for his part, touched on the courts and the oil royalties while Kit Siang condemned Najib’s “unjust policies”.

2215: The police have agreed to allow Anwar and Kit Siang to speak on “non-sensitive issues” for ten minutes more. 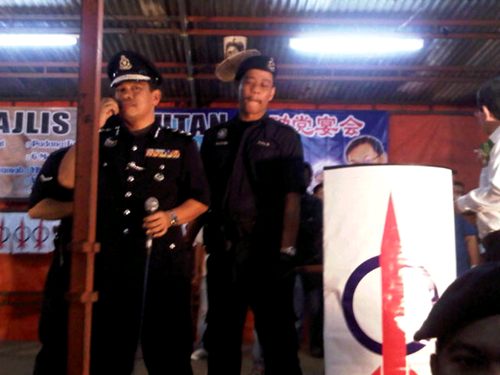 2212: The police are on stage trying to stop speakers from addressing a large Pakatan gathering in Kepong, according to a tweet by Anwar.  They say political speeches are not allowed, says Kit Siang.

Anwar adds: “Police, ocpd on stage to stop speeches! Police state or umno fear? Save Malaysia from oppression, injustice!” Kit Siang is negotiating with them.

Among the other speakers at the event at the 7th mile Masy housing area are Tan Seng Giaw and Husam Musa.

You are the one who are blind don’t simple blame people lah. You are the typical parrot of the BN. Call others names? what’s wrong?…

You are they one whom are fool by the BN, got allocation but does not materialised one.

Dear folks! Everytime FRU is around, please don’t fight and run but just walk slowly and please don’t provoke them as they have every right to hit you with their baton (provided under the act) you cannot sue them so if malaysiakini video shows who kena wallop – too bad. You can try to bring this matter to court but it drag till you are dead also the matter won’t come to court. I’m in overseas and much to my amusement so many happening in the country. MCA pula fighting (never ends) till the party “dibubarkan”. I’m enjoying at border… Read more »

This is a TYPICAL Pembangkang Rakyat (PR) Supporter who supports BLINDLY.!!!
ALWAYS like to call others NAMES!!!

looes74 : Please don’t call Anil Stupid!
Please find out between Federal and State allocations for ALL States before you start Gobbing off and make a Fool of Yourself!!!

Anil,
It boils down to Dollars & Cents. It’s Economy, Stupid!

Dear Anil, It’s been 2 long years after GE12 and the Pembangkang Rakyat (PR) is still POLITIKING!!! Kelantan is still in status quo from those years because the Rakyat wanted it that way!!! Except for Perak, which is now under the BN, what have the PR done for the Rakyat of Kedah, Penang and Selangor??? Everyday ceramah, ceramah, ceramah……..!!! Everyday tokkok, tokkok, tokkok……..!!! Very pity for the Rakyat who voted for the PR MPs and ADUNs!!! The PR leaders of Kedah, Penang and Selangor still harbour the Opposition Mentality!!! Always Oppose for the sake of Opposing!!! Nothing CONSTRUTIVE!!! As the… Read more »

Stupid BN, effectively doing the campaigning for the opposition!

Haiyo, so stupid meh, like that also don’t know…how to be good PM????? Acting like spoiled little kids! Grow up will ya!

the polis also want to speak and sing. they see the others enjoying the party and they tak bolih tahan so they grab the mike. just like you and your friends in a karaoke session. everyone claim they know how to sing the song… well that is malaysia . one rule for umno and another for the opposition. its obvious that they are worried of ‘something’ being expose each time at dinner/ceramah.

This is where UMNO and Gerakan is willing to spend our hard earned tax money – To keep us silence but no money to fight control crime. We have to pocket out money for residents guarded community.

Shame shame shame, looks like the Police’s job in the Boleh Land is to keep an eye and disrupt Pakatan government, no wonder crimes rate keep on increasing…

To those who are concerned, the more you do this, the more the Rakyat will hate you and will wipe you out totally in the next GE.

See, how they hassle Lim Guan Eng in Penang…

The country is really going down to the longkang…

MIC, of course is irrelevant now…

Different faces same style and they think they will rule the country forever by oppessing free speech. In Gerakan K views it provides us with the mentally of those that support BN or UMNO. Either they have follower only mentality or dare not critic BN or UMNO is beyond me. As for PR if they act stupid I will not hold back because they need to be accountable for their actions. The public office is to serve rakyat not selected few and definetly not belong to UMNO or BN. But, I think most BN or UMNO members and some in… Read more »

no wonder i don’t see you here at Sg.Nibung tonite.

No wonder got so much crimes on the streets because the police are used for politiking. Nowadays all the enforcement agencies are not doing what they have been paid by the rakyat to do. Maybe their new KPI is based in the number of disruptions and arrests of opposition. Shame on them!!

Another despicable (situation in) 1Malaysia…

Gerakan K has to cari makan lah. Will only wallop PR.

I forgot it is a Saturday night. Gerakan K, (is probably) out drinking with his friends!… Wanted to go out and get together with my friends but saw Anil’s postings and that he is at his computer, so you get your comments edited fast.

Even HRP does not need a permit to demonstrate against the PR at PKR’s office! They even reportedly said they will bring in 1,000 supporters, but, as, it turned out HRP has lost just everything, support and credibility! Is HRP a legally registered political party? Mr. Anil, can you please enlighten? Funny, why they are demonstrating against the PKR, why don’t they demonstrate against MIC or UMNO? Had these people demonstrated against UMNO, they will be water cannoned and clubbed! Do not understand what happened to Uthayakumar? Like,what was commented many many months ago, this man is not the same… Read more »

They got no permit to do political talks [1]. Why you support the law breakers ???

I really prefer Malaysian Mirror to Malaysian Insider, though Insider is faster with its news, but, somehow, I prefer the mirror, and reliable too, bro.

Perhaps due to lack of funds or personnels, sometimes mirror’s news may come late.

Does not matter, thanks bro!

datuk husam only allowed to speak 10 minute only .
the freedome od speech , rakyat ! this is one malaysia under najib

i was there just now , the wireless missing !! the police want to hide it from the speaker

I suppose Pakatan may want to thank the police for reminding the rakyat just why UMNO and BN need to be rejected come the next general elections? Khairy and his gang can go to the Australian Embassy after the police had confirmed the day before that their march did not have a permit and was illegal. Police all around, but no problem, no tear-gas, no water-cannon, no arrests. SO many similar incidents. OK, I shall log this into my memory, together with Hisham and his defence of the cow-head ganag, the A-G and his defence of the al-Islam journalists, and… Read more »

Shameful, disgraceful PRDM! Instead of fighting crimes they are going after elected Governments! Just how do they want the Rakyat to trust them? Do not understand the tactics and political moves of UMNO! The simple logic that the more you suppress the more people will resist simply does not get into their minds. Like Perkasa, people are treating them like rubbish now! If they continue to harass the opposition, the more people would like to hear from them, as they feel the Government has got something to hide! Had they allowed the PR to berceramah, the Rakyat will get tired… Read more »

Phew so close. I was in Kepong’s Jusco just few hours before the “ceramah” has started. No wonder there were plenty of police out there in the morning. The “ceramah” got permit or not ??? I guess 99 % they didn’t have. Why always do the illegal things again, again and again ??? Can you explain to me, O ???

I am in Sultan Sulaiman Club and the Police had just broken up another Pakatan rally. Something must be very wrong or another huge scandal is coming. That is why the police are going all their way to prevent the scandal being revealed? Is that possible, Gerakan K?