The three have been released after Magistrate Norashikin Sahat rejected a police application to remand them. It is now time for Najib to fulfil his pledge to repeal the archaic Sedition Act.

Well done to the magistrate and to all those who expressed solidarity with the detainees despite 18 arrests two nights ago. “No individual will ever be detained simply due to political ideology,” Najib had pledged two years ago. Time to fulfil your promise. Janji ditepati, remember? 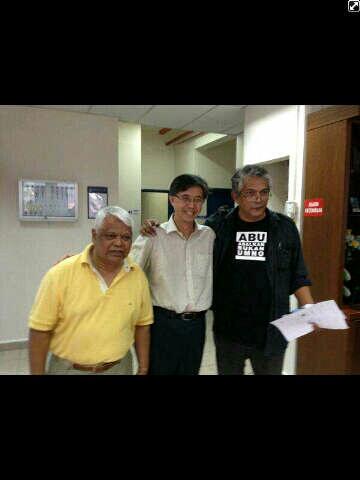 This was a July 2012 report from Malaysian Insider:

Tonight’s announcement comes as part of the PM’s slew of legislative reforms aimed at increasing civil liberties. — file picKUALA LUMPUR, July 11 — Datuk Seri Najib Razak announced the repeal of the Sedition Act 1948 tonight, in his latest move to regain the momentum for reforms ahead of elections that must be held soon.

He said the 64-year-old law would be replaced with a National Harmony Act.

“With this new Act, we would be better equipped to manage our national fault lines.

“It will also help to strengthen national cohesion by protecting national unity and nurturing religious harmony,” he was quoted as saying by The Star during the Attorney-General Department’s dinner here.

Tonight’s announcement comes as part of the prime minister’s slew of legislative reforms to increase civil liberties initiated during the eve of Malaysia Day last year.

Among others, the Najib administration has repealed the Internal Security Act 1960 (ISA), lifted three Emergency Declarations and enacted the Peaceful Assembly Act to regulate public gatherings.

The government has also scrapped the need for annual printing licences in the Printing Presses and Publications Act 1984 and lifted the ban on student participation in politics through amendments to the University and University Colleges Act 1971.

Institute for Democracy and Economic Affairs (IDEAS) chief executive Wan Saiful Wan Jan welcomed tonight’s announcement but said it would be preferable that the Act be scrapped entirely and not replaced with another piece of legislation.

“But since the government will proceed with the replacement law, we congratulate the prime minister for staying true to his promise to put people first through this consultation.

“We urge the public and members of civil society to engage in this consultation process,” he said in a statement here.

Speaking to The Malaysian Insider recently, Bar Council constitutional law committee chief lawyer Syahredzan Johan noted a trend for the authorities to cite the Sedition Act as an early measure in their investigations and prosecution because “it is the “easiest offence to satisfy”.

“They don’t have to prove that there is sedition, only to show there is a tendency,” Syahredzan said, pointing to Section 3(1) of the Sedition Act, which lists six sub-clauses defining a seditious tendency.

It includes “to bring into hatred or contempt or to excite disaffection against any Ruler or against any Government”.

Syahredzan said there was tendency for the government to go on the offensive and use the laws as weapons when it was being hit by criticism. He stressed that it occurs on both sides of the political divide.

Recent cases include DAP chairman Karpal Singh, who was prosecuted on a charge of “seditious tendency” for saying the Perak Sultan could be questioned in a court of law.

When announcing a raft of reforms last year, Najib admitted that the government’s move to allow greater civil freedom was “risky, but we are doing this for our survival.”

“No individual will ever be detained simply due to political ideology,” he had said in his Malaysia Day message.

The 52-year-old ISA was repealed in April this year and replaced with the Security Offences (Special Measures) Act, which saw the government’s right to detain a person without trial removed.

gerakan k,
you are a real douche.
no, Malaysians have been stupid, not pakatn supporters.
to even trust EC on RM10m watercolour to prevent double voting.

I said this many times before that the rapscallions in Umno was only replacing the old wines in the new bottles, these rapscallions, just like the … shenanigan Mahathir, will not be able to survive a day without them. Once again they think the people have been fooled, at least for now and it is only further proof of what Najib’s transformation is. Just ask yourself can a leopard change it’s spots ?

Sedition Act perfectly ok for someone inciting the public to create chaos. What is the problem ??? Why pakatan supporters suddenly become so STUPID ???

Now these three gentlemen (Haris, Tian and Tamrin) will become eternal friends just like LGE and Mat Sabu. I hope and pray that when oppression and injustice have become too excessive, part of the state apparatus that helped to perpetuate it will also begin to feel the pain in their hearts and souls. There was absolutely no justification to remand these people. They have not run away or refused co-operation, so why the need to harass them by keeping them overnight at the lockup. The police can interview and interrogate them in their office, home, airport lounge and in between… Read more »

Their release by the Magistrate is indeed a welcoming great news of the day. The Court must be above suspicion at all times to maintain the Bosses’ trust – “People trust” and confidence in the rule of law. That would make Lady Justice cry in shame if such elements are found to be lacking in the discharge of the judicial duties by the members of the bench. One can understand why Lady Justice is depicted as blindfolded, holding a balance scale and a sword. The idea is to portray justice as objective and impartial (blindfold), able to weigh the arguments… Read more »

Our confidence toward the 1PM Najib has been eroded with this event.

This is great news but I fear that this is won’t be the last. I’m more curious about the majistrate’s decision. Forgive me for being sceptical about Malaysia Judiciary system as I’m too familiar with our “… courts”.

Could this mean that there is some hope left within our judiciary…are there judges who dare go against Umno?

The legacy of Kutty of Helang Island should be wiped off the land of this beloved Tanah Air Cinta Ku. Almost 3 decades & we still see this disease eating away our freedom as Rakyat to determine our destiny.
We will have to wait & see what happens next after this magistrate decision.
Reserve my Cheers Kopi-O kau kau.