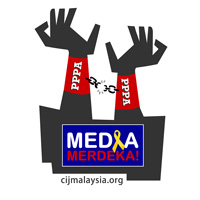 Happy Merdeka, folks! It’s time once more to reflect on the state of our nation and where we are at the moment.

We have much to be thankful for. Despite the best attempts of certain quarters to divide us on the basis of race and religion, Malaysians by and large haven’t fallen for the bait. We have grown into maturity and can now see through such diabolical tactics.

Nonetheless, there are still issues that require sober reflection. The watershed elections of 2008 promised to renew our nation. But that remains very much a work-in-progress. Thirty months later, oppressive laws are still etched in our statute books. Laws such as the ISA and the Printing Presses and Publications Act, for instance.

This blog is part of a nationwide campaign on blogosphere today to get rid of the undemocratic PPPA. Lately, it’s not just opposition newspapers that have felt the repressive provisions of this law, but cartoon books as well!

Without freedom of the media and of expression, we cannot move forward and articulate progressive and creative ideas to rejuvenate our nation. We are unable to promote a wider, healthier debate on the issues that matter to the people. We are unable to highlight to a broader audience the corruption and economic hegemony that leaves many residents of Malaysia struggling to make ends meet.

As long as oppressive laws remain in our statute books, we will not realise the full vision of independence, freedom and justice that Merdeka promised. We cannot leave the task or renewal and reform to the politicians alone. All of us have a stake in this. We must get involved in the movement for justice and renewal. For a start, this Merdeka, let’s call for the scrapping of the oppressive PPPA.

Anil, thks for words of encouragement but how many more years we have? That is why i really admire the strength and perseverance of Lim Kit Siang and Karpal Singh, they dont seem to get tired arguing in the Parliament with those whose intelligence are not even a tenth of them … Yes, after half a century gone, we had 308… It was awesome, many people cried tears of joy … The next GE is crucial – make or break ! Can only pray and hope Allah God will have mercy on this land !!! Have a nice day and… Read more »

Yes, 308 took a long time to build up. It didn’t happen overnight, but required many years of ground-work and awareness raising.

Namewee ask: Do You Read Me?

Namewee, to be honest.
Some can read you fine,
but some cannot tahan hearing (your songs) you.
Self censor a bit-lah!

Hi! O, thks for replying but i think we need more than a tsunami to win in the next GE, a miracle has to take place la brother…

Can only hope that Allah God will have mercy on this nation, otherwise, pack and leave as there wont be any future in this land for the younger generation…

We should never give up on the struggle for justice and reforms. The movement for justice needs time to build up; it is like a trickle turning into a stream and then welling up into a river before finally pouring out as a sea change.

Thanks Sean! I think this is the best “Terang Boelan” I have heard. The beat is fantastic!

This brightened up my Merdeka immensely – I was just following the Negaraku story at Wikipedia and looked this up. For fans of Pulp Fiction and everyone who thinks that Negaraku is actually a great tune:

Turn it up and have a Happy Merdeka!

It’s not like I haven’t got anything better to do… it was coffee time, and YouTube was already open… any chance of the 1Malaysia F1 Racing Team producing a response to this?

Mud throws at a clean person won’t stick. Sedition, libel and defamation are tools of human devils, inherited from medieval masters. “The freedom to praise is the freedom of slaves.” – Greek/Roman senator “People should not be afraid of their government. Governments should be afraid of their people.” – movie “V for Vendetta”, 2006 “Granting the state the right to judge what [can be] expressed would put us on a very dangerous slope. Speech should be protected up to the point where it is part of an imminent crimional act”- Noam Chomsky, 2006 “Freedom is not worth having without the… Read more »

Merdeka Merdeka Merdeka!!!
After more than half a century should it not mean … equal opportunity in level playing field for ALL Malaysians?

Prime Minister Najib’s ‘zero tolerance for racism’ must apply to ALL Malaysians and if he is sincere about it, his rhetoric strategies must end with immediate effect. He should say what he means and mean what he says!

Merdeka goes a begging..What to celebrate eh? Saddest merdeka I have ever witness. This nation is simply sick. This is why, Hishamoodin make irresponsible remarks about DAP parliamentarian Teo Nie Ching as “dirty” and shock by encouragement from Nik Aziz to visit mosque. This piece of ‘trash’ expect others to just sit and take it in? While others talks about Unity, (he) is so confuse that he’s afraid other muslim bro and sis will be just like him. With idiots of these sort, whats there to celebrate? Its like living backwards and these (people) might as well lived in caves.… Read more »

Racist principals are not punishend but swift action will be taken agaisnt Namewee for ‘mengugat keharmonian’?

Fat chance. And what is the prospect if the PPPA is lifted? A flood of new journals self-respecting their own ‘ethics’ and ‘principles’ while promoting own-brand censorship, their favourite religion-based enclave and Khairy Jamaluddin?

Give me Utusan Malaysia, chedet.cocc and a chilli-covered satay stick to ram into my eyes any day.

We must rid the Oppressors first and the oppressive laws will follow…”Act with your brains and not your mouth!”…

Next GE, put in place a 2-party system by putting to pastures the 53-years of mismanagement and lately the oppression by the UMNO-led govt! All the claims by the UMNO-led govt that they are reforming and changing remain mere rhetorics – they can NEVER change! Unless we put them in the opposition bench to help them rid themselves of the rent-seekers!!

Ya Happy Meerdeka folks but how come i got up feeling so heavy and so sad… We seemed to be more happy 30 or 40 years ago than today, how come? 30 years ago i mingled so well with the Malays but now, i am made very much aware that i am a Chinese and he is a Malay and a Muslim, and Muthu is an Indian, how come? When i visited Malaysiakini just now, I was told that (by one En Hisham) I am dirty, how come? Is my vote (the non’s vote) also dirty? Folks, we may be… Read more »

Kee, You will probably wake up during the 54th Merdeka Anniversary celebrations, feeling happy, being able to identify yourself as a Malaysian when we are focus on our mission to send this rotten to the core UMNO/BN into the Opposition after PRU 13. Until and unless this is accomplished, then we will only continue to suffer more. Did you see anything good coming out from UMNO/BN since 2008? They are such a horrible government and we can now see it. Through the wise decisions of many Malaysians, we now have Pakatan led States, and both Penang and Selangor are shining… Read more »

My 2 Cents Borrowed Quotes about Censorship: If you don’t have this freedom of the press, then all these little fellows are weaseling around and doing their monkey business and they never get caught.  ~Harold R. Medina The populist authoritarianism that is the downside of political correctness means that anyone, sometimes it seems like everyone, can proclaim their grief and have it acknowledged.  The victim culture, every sufferer grasping for their own Holocaust, ensures that anyone who feels offended can call for moderation, for dilution, and in the end, as is all too often the case, for censorship.  And censorship,… Read more »