Here’s a defiant statement from cartoonist Zunar yesterday over the banning of his publications. After all, what else can a cartoonist do but draw what he feels for? 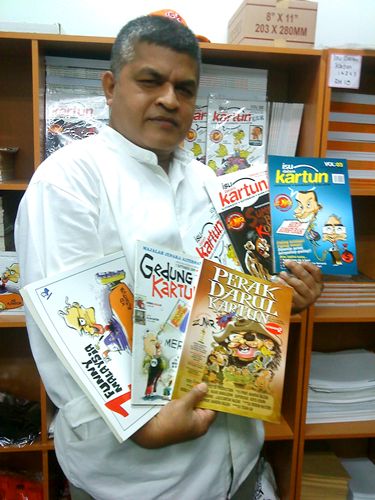 At press time, I have yet to receive an official letter from the Home Affairs Ministry on the banning of my books.

Based on the news report in Malaysiakini (24 June 2010), the Home Affairs Ministry was quoted as saying that three of my publication were banned, namely ‘1Funny Malaysia’, ‘Perak Darul Kartun’ and ‘Isu Dalam Kartun (IDK)’.

‘1Funny Malaysia’ is a collection of my published work from the year 2005 until 2009, in Cartoonkini on Malaysiakini.

‘Perak Darul Kartun’ is a book published by my own company Sepakat Efektif Sdn Bhd.

‘Isu Dalam Kartun (IDK)’ is a monthly magazine with a publishing permit from the Home Affairs Ministry. Three issues have been published: vol 1, vol 2 and vol 3.

Last year, another mangazine of mine ‘Gedung Kartun’ was confiscated and banned. According to the latest statement from the Home Affairs Ministry, all six of my publications as well as my team of cartoonists are listed in the ‘Prohibited Publications’ list.

In the Malaysiakini report, the chief secretary of the Home Affairs Ministry Mahmood Adam reportedly said these books are banned because they are not suitable for reading by the public.

All three publications will be put in the “Prohibited Publications” list due to content that will influence public perception of the country’s leadership and government policies. They are not suitable for reading by the public and may jeopardise public order.

The government/Home Affairs Ministry has alleged that the content of my cartoons will influence public perception against the country’s leadership and government policies. Thus, they are not suitable for reading by the public and may jeopardise public order. This is a serious accusation and must be supported by strong reasoning and proof.

With this ban of the six publications, it also means that all 312 cartoons and my whole team of cartoonists are being banned as well.

I demand that the Home Affairs Ministry explain the definition of “content that will influence public perception of the country’s leadership and government policies. Thus, they are not suitable for reading by the public and may jeopardise public order.”

I demand that the Ministry identify which cartoon of the 312 cartoons is categorised as “a threat to national security and not suitable for reading by the public”.

I am responsible of all my cartoons and I am willing to face the law if I have broken any law.

From a business perspective, the Ministry’s action has caused considerably large amount of losses to my company. It is estimated the amount of losses may climb to RM50,000 to RM80,000 with the returns of the publications from vendors.

I would like to stress that material gain is not my objective. As a cartoonist, it is my social responsibility to
expose the truth; and the lies and corruption of the BN government.

Saidina Ali once said, “Telling the truth to the tyrant leader is the real patriot”.

Where can I buy Zunar’s comics?

Thank you and best regards.

What courts?….Kangaroo Courts?
What laws?…..UMNO laws?
No my friend, we do not teach our sons/daughters to do crime or something against the law…it is the … corrupts and liars from the UMNO … that are showing a poor example….

It is so clear that this government is afraid…fear because there’s lots of things to hide. That’s why the need for draconian and inhuman laws.

ONLY BONES OF CONTENTION BUT NO FUNNY BONES

Cartoons are banned outright without seeking the views of the Rakyat, judi bola, needs to find out the opinions of the public, and finally a unilateral decision by UMNO Baru without consultation with MCA, MIC, do not talk about Gerakan, it is so irrelevant and not worth mentioning in Malaysian politics!

gerakan k, should throw Zunar to jail too?

but its alrite to have law breaker under section 377 as head of a major coaliation of BN?

its alrite to blwo a woman in pieces and have her immigration entry records deleted?

its alrite to buy submaribes that cannot dive and build stadiums that crumbled?

what a great govt you are supporting, no?

It is up to court decision whether to do anything to Zunar or others.

But at least we cannot encourage people to do crime or anything against the law.

Don’t tell me you teach your son/daughter to do crime or something against the law !!!

UMNO can joke all the way to fool the people and they can get away with it. Now when jokes are on them they cannot take it. Just like most children crying when they are losers. UMNO go and cry out loud or face it
like a good boy.

They say eating pork is the Chinese’ right…

They also say gambling is the Chinese’ right…

Suddenly, they are so civil conscious, they are upholding the rights of the minority, albeit fearlessly…

They know why, we know why and Allah, too, He knows why…

But, they take away Zunar’s right… they banned his books, apa pasal???

They seem to be very scared of cartoonist, why ???

Gerakan K
Hey, Mr…, why not start your suggestion with your Utusan Melayu papers first! You only have half your brain working and even that, is tainted with your UMNO masters’ …!
Don’t waste your time lah, your UMNO CEO needs a massage…Anil, have no cookies for you here.

Hi Saudara Zunar Chins up, heads high!! This is what I would say to you and your team. As beloved Malaysians, in the TRUE spirit of Muhibah, I am proud of you and your team. We are all but mere passengers, travelling this universe momentarily, must leave this place in better shape than it is and must always uphold the principles of: 1. SEEKING THE TRUTH 2. BEING CONSIDERATE & CARING, LIVE and LET LIVE, jangan sapu semua whatever “objects or possessions or contracts or philosophy or processes…they may be”… material or spiritual or mental, NO MONOPOLY! Enough is enough!… Read more »

Defiant Zunar, “Good on you!”
These UMNO goons started the jokes (oozing rubbish from their tiny …)and now, the jokes are on them…..hahaha!

The government must act tough to this repeat offender. It is not enough just to confiscate the problematic magazines.

How about heavy fines and other acts such as EO / ISA ???

EO/ISA? What wrong has he done? Dont be a fool and waste your time talking nonsense.