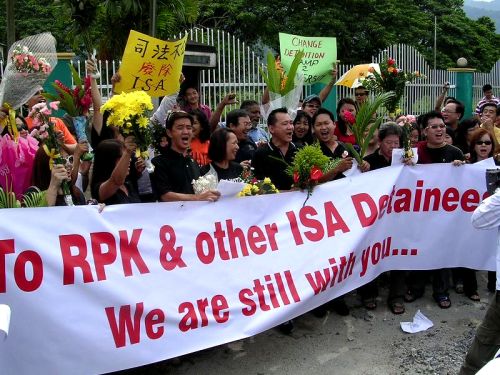 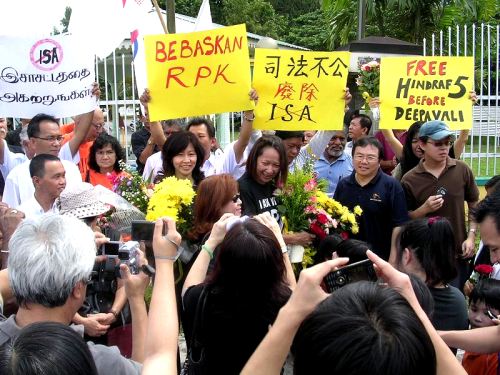 Marina received lots of flowers and cards for RPK

We arrived around 11.06am. Singing was underway when I got there. I was excited to see many people who were there to show support. People were mingling around with intermitten shouts of “Free RPK, Free Hindraf Five” and “Mansuhkan ISA”. There was no heavy presence of police. Marina was there. It was good to see her smile amidst the challenges she’s facing. People, she needs all the support we can give. …

I am glad that strangers could get together for a united cause. Today, I put a face to names that I know through blog comments. … It’s great to have met you all. POWER TO THE PEOPLE!

Of course, we couldn’t even get near the main gate. But Marina was there and we “gave” her our unreserved support, flowers, cards and two songs as reported. I took a cautious peek into the inside compound and saw a big sign ‘SELAMAT DATANG’. How come we couldn’t go in when it’s Selamat Datang? I think the sign is meant for RPK and his comrades inside.

It was a great show of support Anil, i was there, baru balik rumah actually, kinda tired.. lol .. this is the difference, tired … being under the sun for the rakyat, not like Pak Lah who yawns in an air conditioned convention, lol .. it was great … wonderful support. Police were quiet, I spotted FRU with batons but they were like 200 metres away from the crowd. It was great; Marina Lee was there, managed to pass my bouquet of flowers to her and managed to see her LIVE actually … rather than pics in media… We sang songs; anti-ISA shirts were selling like hot cakes. Anyway, the camp looks like a rat-hole; poor detainees, they don’t deserve such a life.

A Call To All Malaysian : Say No To ISA Dear Malaysians lets us together say no to ISA, a brutal law that denied human rights in MALAYSIA. This law is law of draconian which allow detention without trial and currently misused by Malaysian government to silence people voices. To fight this injustice and to release all the illegally detained Malaysians lets us open up 10 000 blogs with message “NO TO ISA”. Let us all unite beyond race and religion and send a clear message to Malaysian government that we Malaysians don’t want this brutal law to be practiced… Read more »

Hi eventhough we can’t be with all of you as we are in UK, our thoughts & prayers are with all of you esp.Raja Petra ,Hindraf Leaders & all those detained under the Draconian ISA esp their loved Ones & Family.
One towering Malaysian is Datuk Zaid Ibrahim,who is a Rare Umno politician and One who deserve all our admiration & respect.
Datuk Zaid should be in a party leading the Country.
Lets all work towards a New Malaysia free of Racism,Fear & Corruption ! And free of ISA REFORMASI !

Please check out this links too re Repeal ISA activities:

Dear All For your information the show of support and solidarity event was allowed to proceed smoothly without the heavy presence of the police or FRU was partly due to the presence of YB Yew Tian Hoe State Assembly of Aulong and yours truly. If you guys were there a few months back where about 2000 Hindraf & JMI supporters took part in a similar event (candle light vigil), road blocks were set up as early as 3 p.m. whereas the event was only supposed to start at 8 p.m.. The event went on under heavy police and FRU presence,… Read more »

we are waiting and waiting patiently, but everyday the wait is so painful and disheartening, the pain is unbearable, yet we put on this brave face and go about our jobs. We pretend we are happy when we are blue. How painful it must be for the ISA detainees and their families. On DSAI, we are waiting and waiting, we are not giving up. Sorry that this heavy burden is upon you, but we have choosen you as our leader and we wait for the silver lining at the end of this dark cloud. Please let it come soon and… Read more »

Yes great show of support, keep the spirit up guys!!

Thanks to those who were there.!!

I was there together with my sisters and this is the first time that we have attended such gathering. I am so happy to see the lively sprits of all the people that have gather there and so glad to have met Marina Lee. We are happy to see her smile and spritually, we know she is very strong willed and will carry on the fight to get RPK out asap.

Fomca,
Well you can always volunteer yourself

What do you expect? 5-star treatment?