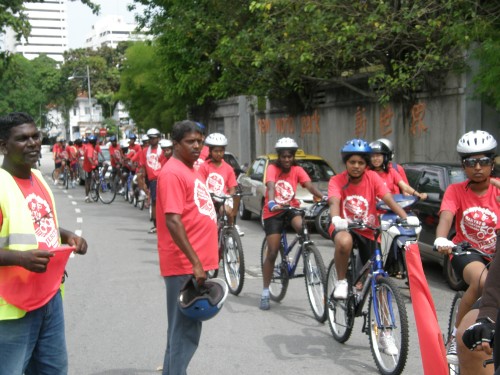 Tomorrow, the Jerit cyclists are due to submit their memorandums to Abdullah Badawi and Anwar in Parliament

It is the climax of an extraordinary campaign that has been wildly successful in publicising the six Jerit demands.

Ironically, the oppressive police action only served to heighten publicity for the campaign. If the cyclists had just been allowed to quietly pedal their way to Parliament without any obstruction, perhaps fewer people would have sat up and noticed.

Let’s hope there’s no more drama when they hand over their memos in Parliament tomorrow.

This is a piece I wrote for IPS looking at the campaign as a whole:

PENANG, Dec 17 (IPS) – Dozens of cyclists promoting workers’ rights are on an extraordinary odyssey across the country, scheduled to climax with the handing over of memorandums in Parliament on Thursday.

It has been a rough ride, so far, with arrests and police harassment constantly threatening to bring their journey to a premature end.

I see the beginnings of a Gandhi-style Salt March
for social justice here.

I would like to propose my Seventh Law of Malaysian Politics:

Well done and great work by all the JERIT cyclist.
They really went thru all the barriers and various harassment set up by the polis. JERIT set a fine example .
If only the polis have the determination of the JERIT cyclist , crime in this country would have been reduces to halve.
The cyclist of JERIT are really a new generation of Malaysian fighting for freedom and fairness.Well done!

After using ISA to protect journalist, now police arrested the under 18 cyclists to save them from being used by ….
Just wonder when the police will put us under their custody to protect us from ….
With the crime rate getting worse, seem like the better option is to surrender ourselves to the police by going to jail for better protection.