Ambiga continues to faces more harassment. This was painted on the road in front of her house. 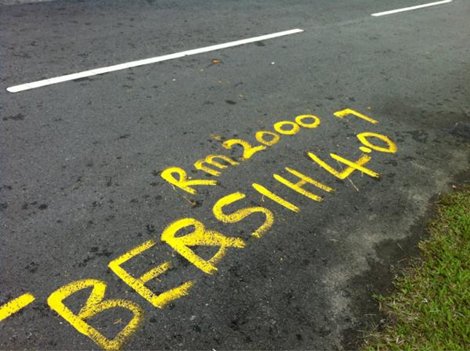 This is supposed to be the going rate for a ‘prime lot’ for a traders’ stall protest outside Ambiga’s house on Thursday and Friday.

In another development, the prosecution has applied for a postponement to 31 October in the cheating trial of former Transport Minister Chan Kong Choy. Apparently, it needed the time to make a “final decision” on the representation submitted by the defence team. No hurry there. Chan has been charged with cheating former Prime Minister Abdullah Badawi into approving Kuala Dimensi Sdn Bhd as the developer for the RM1.9bn transshipment hub project in Pulau Indah Free Zone while allegedly hiding the fact that the development would be financed via bonds with Chan’s support.

I thought the delay tactics was taught by Karpal & Sivarasa all through Anwar 2nd trial… Anwar never went to trial , he never answered any question because his law abiding personnel just hoodwinked the law.

God is always on the side of right rather than the side of might. Truth will prevail. See the spelling in “Bersih”? its evident God is working!

The Chinese Sex Legend knows all about taking your time. No hurry there.

When it comes to overt harsh-dealing against decent minded people, you can be assured of Speedy Gonzales prosecutions with plucked from air evidences. While most crimes of Barang Naiki minions are either referred to for more time for hatching un-hatchable eggs or delayed due to prosecutors on sudden ‘window jumping’ leave or overnight change of judges who can’t judge with a ‘favorable’ judgement, & lagi senang, easy acquittal for not proven innocent with glaring evidences or a nice mommy’s slap on the wrist of “just-down-do-it-again” to show ‘harsh’ public punishment! We can forever wait till the milked to the bones… Read more »