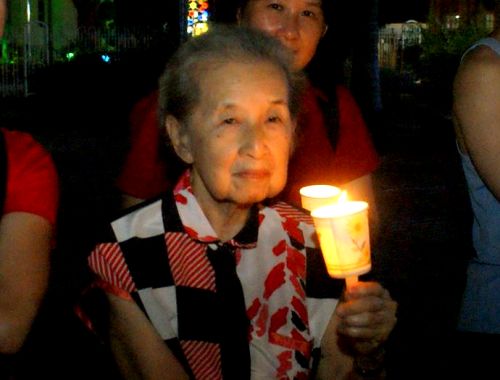 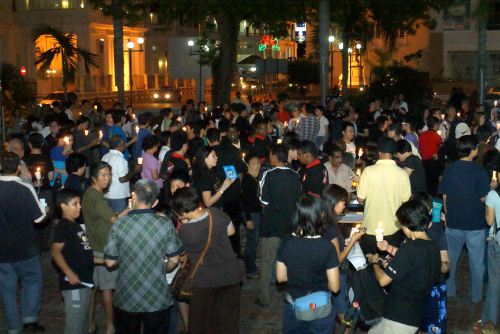 John Pilger’s award-winning War on Democracy, which was screened at the opening of the Freedom Film Fest in Penang last night

Just a couple of updates on what’s been happening around Penang:

But before that, a Molotov cocktail was reportedly hurled into Teresa Kok’s parents’ house at 2.55am today. Thankfully, they failed to explode and no one was hurt.

Last night, some 300 people attended an Abolish ISA candlelight vigil in front of Dewan Sri Pinang for the third Friday night in a row. More pictures by Amiruddin here.

I wasn’t there as I was at the Wawasan Open University attending the Freedom Film Fest (see below). From what I hear, those who attended the candlelight vigil wrote dozens of greeting cards to the detainees in Kamunting. Many wanted to send cards to Raja Petra. Organisers pointed out there are 65 other detainees in Kamunting who would be happy to receive cards as well, so some in the crowd said, okay, we will write one card to Raja Petra and a second one to another detainee! RPK sure has some ardent readers. Speaking of which, I just discovered this morning that I share the same birthday as Raja Petra… which is nice 🙂 Many happy returns, Raja Petra!

Some good soul has come up with an easy way for you to send a protest email to your ‘favourite’ politician for detaining RPK and others under the ISA. Click here.

To wish YM a “Happy Birthday” today, in my humble opinion, will not do any justice to him, to put it very mildly. There will be many well-meaning friends who will wish YM so, as is the normal greetings on one’s birthday. But today is not a normal day for Raja Petra. He is sacrificing his freedom for our freedom.

I wish him well.

Justice will prevail in due course!

One volunteer placed a dustbin on the ground and said, “This is where we are going to ‘buangkan ISA‘”, as those present threw scraps of paper in the bin.

Police allowed the event to proceed unhindered for around an hour, but they drew the line when some in the crowd wanted to do a walk. Organisers abided as they did not want to jeopardise future Friday night vigils.

Over at the Wawasan Open University, about a hundred people attended the opening night of the Freedom Film Fest. The turnout would probably have been higher if not for the clash in schedule with the Abolish ISA vigil going on at the same time. A couple of excellent documentaries were screened, Abror Rivai’s ‘Pilihanraya Umum Malaysia ke-12‘ and John Pilger’s ‘War on Democracy’.

Blogger MP Jeff Ooi addressed the audience while Aliran president P Ramakrishnan officially opened the Freedom Film Fest, paying tribute to those who ‘dare to document’ the struggle for human rights and justice.

More movies and documentaries will be screened today and tomorrow at Wawasan Open University.

Kudos to the Komas team for a brilliant effort in bringing this annual Film Fest back to Penang.

I wish all Muslim ISA detainees “Selamat Hari Raya”. And I wish them to be released after the downfall of umnoo very soon. All my friends will pray for your good health and healthy mind to fight for a good cause. RPK you will be free very soon because God is watching us and the evil ones. … Whether you believe it or not but these are universal law to be taken against those evil in authority by God. If they treat all beings well you will also rewarded in heaven.

I wonder how to send greetings to the kamunting detainees. Thks.

Dear Anil,
The lead to the protest email is a wonderful link. Makes it easier for everybody to just put their name and click send. Bravo.
Abolish ISA

whats it all about

The Molotov cocktails could have ignited and the ensuing fire would have easily engulfed the whole house within minutes. By that time Teresa’s elderly parents would have difficulty getting out from their house, bearing in mind our heavily grilled Malaysian houses.

These people are not only cowards but potential murderers.

“Molotov cocktails were reportedly hurled into Teresa Kok’s parents’ house “
– (Nutrition investigators) believe they will crack the case soon. The egg has already been brought in for questioning.

Seriously, WHAT IS HAPPENNING TO MY COUNTRY?!!!

Those culprits, who threw the two melotov cocktails at Teresa’s home, I only have this to say to them. “You are nothing but, ignorant and sick mentality cowards, a disgrace to the nation.”
…

Happy Birthday, pal. Save the cake for RPK. Cheers.

We Librans are well set up to face the world, aren’t we?
Happy Birthday, Anil!
Mine’s on Monday.

Happy birthday to you & RPK..May many more to come..:)

I wanted to post a suggestion to MT..but the registration to comment had been closed. Maybe you can pass the message on,
my suggestion is there be a petition to the agung to not approve the appointment of Najib as PM. He was not who the people elected
for hence a snap elections should be called to determine the people
are behind him when he takes over.

Have a blast on your birthday..:)

Wishing you a very happy birthday and many happy returns!

Keep up the good work bro and keep us posted with every exciting news you can get your hands on.
Chao, and take care bro.

Happy Birthday to you too, Anil! Along with RPK, you should get a medal.

Happy birthday mate, wish you well and may you be blessed with happiness and good health. Also send Pete his Birthday Card and Raya Card to Kamunting. Lets flood the mail box. Keep up your good work.

I love the idea of tshirts and yellow ribbons. I will be buying mine asap! I already bought the ribbon and am flying it from my car. I hear that they’ll be available soon. Definitely, wearing a Free RPK Tshirt to an Open House is even better than boycotting the Open House. Maybe there will even be MSM coverage if the group is big enough. I heard about a movement where you can get hundreds and thousands of strangers to do something at a designated location and time via viral sms/ facebook/ etc. They did it this year at The… Read more »

Let us wait and see what PM and DPM and the Botak Man has to say about this! Are they going to condemn it? Silence means tacit approval of adopting violence, I would say.

Birthday greetings to RPK! and to you too Anil!

There is a book that says that the power of thinking in the positive is much greater in result than in thinking in the negative. Therefore, our language of thought and speech needs to be framed in the positive in order for our wishes to be more effective in bringing us the desired result. So, instead of an Anti-War Rally, for example, we should be thinking of peace and promotinbg peace and holding a PEACE RALLY. Just a suggestion but a unified Peace movement would be infinitely more positive than thinking of our anger in an Anti-War effort. We can… Read more »

anil, so you’ll be attending the film fest again for today and tomorrow? i left the film fest after the PRU 12 screening to go to the vigil. yes indeed this time there were many people. i had to be there as i promise to distribute yellow ribbons. hopefully i can be at the vigil again next friday.

The Story of a Sign:
To all the ISA detainees, in particular to RPK on this day, his birthday…