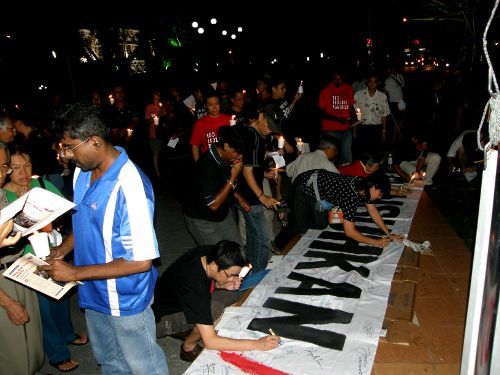 Ordinary Malaysians scrawl their signatures on the Abolish ISA banner 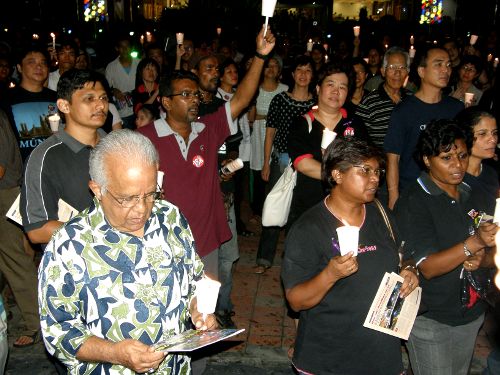 The Bishop of Penang (left) was among those who showed up

Some 200 concerned individuals turned up tonight in front of the Dewan Sri Pinang to attend the weekly candle-light vigil. The turnout was slightly lower than last week’s 300 perhaps because of the Raya holidays as some were still out of town.

But there were a few ‘visitors’ from KL attending tonight’s vigil, taking advantage of the holidays to return to Penang. One of them remarked that the Penang police appeared to be more tolerant of these candlelight vigils compared to the cops in KL.

Aliran’s Angeline Loh read out the names of the 66 ISA detainees and the duration of their detention as the crowd listened in silence.

A huge ‘Mansuhkan ISA’ banner was placed on the ground and those present then scrawled their signatures to support the call for the repeal of the Act.

It was also a pleasure to meet a few of you blog readers in person.

Among others in the crowd, apart from the familiar civil society faces, were the Catholic Bishop of Penang, Anthony Selvanayagam, and Bukit Mertajam MP Chong Eng.

Awesome penang folks..i was first time there…was really touch my heart…all are there for one reason…..I will be there again n again..
No to ISA and FREE RPK and the Rest

btw… what happened to the Kepala Batas openhouse visit?

Missed this week. Down with a back pain but will be there next week. Yes, Malaysians, you people need to stand up and walk the talk to fight for your rights. The government is not going to know if you are unhappy if you sit at home and do nothing. Don’t let the government intimidate you. Come on and join us in this fight for justice. Spread the word around using SMS, emails and word of mouth. Tell your friends and relatives. Encourage them to come.

Hi Penangites at o8/03/08 we change the state govt. after 39 yrs of hardships,we can do it base on all Penangites have the same and clear direction to make it happen. We have to keep on this momentum to check and balance,as well not allow abuse of power by the federal govt.to use the draconian ISA law which is against human rights in a democratic country we love so much. Hope every Penangites can take part at the #light a candle light vigil in front of Dewan Sri Pinang to gather the peoples power to the maximum for the aim… Read more »

You guys continue to amaze all with your stamina. Well done & keep up the good work!

So long as the 6th generation and 7th generation Indians and Chinese and Singhs born and living in Malaysia do not stand up and make themselves heard as Malaysian citizens they will always be recognised as second class citizens.
ENOUGH IS ENOUGH ARE YOU GUYS MALAYSIANS OR NOT? STAND UP AND FIGHT FOR YOUR RIGHTS!

I saw the Hari Raya gathering outside Kemta, as I was on my way to visit my hubby. I tot of dropping by few seconds, but i was ushered to the registration table by few wardens on duty…So sorry.
But I already conveyed the message to my hubby inside.He said taq so much for the effort.

I’d love to attend one of this these days, but my work schedule doesn’t allow me to. Any reason why they’re held only on Friday nights? 🙁