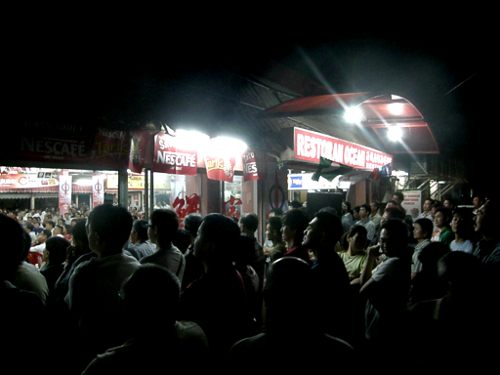 2248: We make our way to Ocean Restaurant about 4km away. Here the DAP is hosting a large dinner for a few hundred guests. Outside, a couple of hundred other people are trying to peer through every open window and door. Perhaps 800 in all. At the main table are top DAP and Pas leaders. The response from the crowd seems positive.

We have seen enough; it doesn’t look as if the Pakatan will encounter any problems in securing the Chinese vote despite the mainstream media’s – and Karpal’s  – best efforts in highlighting the Pas-DAP divide over the issue. As we walk to the car park, we hear a familiar voice on the microphone (was it Kit Siang?) inside the restaurant. “The people of Kuala Terengganu have a tryst with destiny on January 17,” booms The Voice. 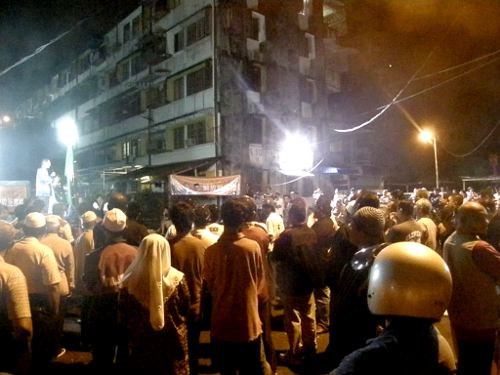 2100: We land up at Pulau Kambing, KT, where a small PKR ceramah is in progress near some low-cost flats. Saifuddin Nasution is speaking and Anwar is about to arrive. The crowd is multi-ethnic.

Anwar’s plane is delayed, the talk goes, but then he shows up. He tells the crowd of about 500 that the hudud controversy is a non-issue. “The BN folks hate to see us united and want to split us. In the five Pakatan-ruled states, do you see any problem over this issue?”

He refers to the front-page story in the latest edition of the PKR newspaper, Suara Keadilan, which highlights Najib’s allegedly unfulfilled promises of allocations for mosques and other institutions made during the Permatang Pauh by-election. “Don’t be swayed by whatever they promise. If they offer you aid, take it and then vote for us!”

Pas youth chief Salahuddin Ayub address the crowd next and highlights the issue of the oil royalties and points out that Terengganu has one of the highest poverty rates in the country.

We bump into a few media people and the conensus is that Pas has a 60:40 edge (optimistically) or a 55;45 edge (realistically).

An independent Chinese-language journalist who has been here right from the start of the campaign tells me she has been doing street polls. For the Chinese, she says, their concerns tends to centre on issues of accountability and corruption. “The hudud thing is not a big issue here.”

A DAP worker later seems to concur, suggesting it could be 50-plus:40-plus in favour of Pas.

This ties in neatly with what Kassim had told me a couple of hours ago.

2000: We stumble upon an open-air curry centre and order capati for dinner along with carrot-and-apple juice.  I ask the Indian guy what his prediction.

“God knows,” he replies. I guess he has a point. He looks busy, as he furiously caters to his waiting customers, most of them Indian.

The capati is excellent. Dry and great texture.

Nearby, we spot a BN road-side operations stall. It appears empty. I look more closely. No, there is someone inside. He is watching television!

1900: Time for some dinner, so we head out to the streets. Walk up to a Pas election operations stall and run into a Pas supporter by the name of Kassim.

I ask him about the ceramah schedule. He eyes us curiously and I ask him who he thinks will win.

What’s the difference this time compared to the 2008 general election?

“The last time we had a candidate from out of town (Mat Sabu); this time we have a local guy.”

And what do you think are the main issues?

How was the money wasted?

“The Monsoon Cup, the pasar warisan, which is more like a white elephant, the Crystal Mosque. That Crystal Mosque cost hundreds of millions,” says the Pas supporter, clad in Muslim attire. “We have enough mosques – what we need is aid for the poor. Look I can show you right here (in the middle of town), if you go further inside (off the main road), you can see the poor households.” 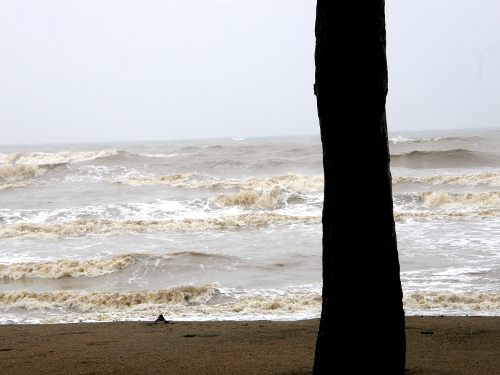 The South China Sea lashes the East Coast today as the rain pelts down. Will a political monsoon follow?

1817: I notice some hugely important comments by blog reader Pelanuk about poverty reduction in Terengganu:

…the fundamental fact of the matter is that Terengganu is a disaster zone (in terms of poverty reduction), and that’s the context.

1. At the per capita GDP level, Terengganu is way above the country average. Yet it has amongst the highest poverty rates in the country — and except for the five years under Pas, that “achievement” is all Umno’s, counting from the start of NEP in 1970. Now what does that tell you?

2. With the revision in the Poverty Level Income in 2004, at the peninsula-wide level, the poverty rate increased from 3.1 per cent to 3.6 per cent, i.e., by some 20 per cent, more or less in line with the increase in the PLI. But in the case of Terengganu, it increased by at least 50 per cent (if one takes the count from 2002 and assumes there was no decline between 2002 and 2004), and possibly doubled, if one assumes that it continued to decline at the same rate from 2002 to 2004…

1700: Miraculously, we find a room at a cheap hotel in the heart of KT. Around RM50/night. Pretty basic, washroom facilities are rudimentary, but it’s spacious; it will do just fine. We won’t need to use the borrowed tent!

I ask the reception staff about the by-election and who they think will win.

They appear to be Muslim; the guy hesitates but the woman replies, “Pas.” And the guy nods his head.

I ask them why, and the man replies, “Cukai tanah akan turun.” Both of them seem to think the state will be better managed.

I ask a couple more questions, and then the woman gets a bit worried. “You mata-mata gelap?

I laugh and reassure them and retreat to my room. Do I really look like a mata-mata gelap?

I get online and find a welcome note by blog reader, [email protected]:

Welcome to Kelantan/Terengganu. I assume that you had taken the normal KB-KT road, and must have passed Jerteh (which is about 12km from my hometown Kg Raja, Besut and should have arrived KT by now (2pm). Besut is at the Terengganu border district with Kelantan. Our East Coast dialect is also sort of in-between, not so Kelantanese nor so Terengganu-ish…

Ya, it was pouring here yesterday, cloudy since Monday (was quite sunny last week) and drizzling on and off, today. Guess the rainy season is far from over yet. Hope it’ll be better next few days over in KT.

Okay, wish you a good and fruitful trip. Cant wait for this P36 to be over. Just cannot stand what’s on TV these few weeks. I pray that Pas will win, insyaAllah. 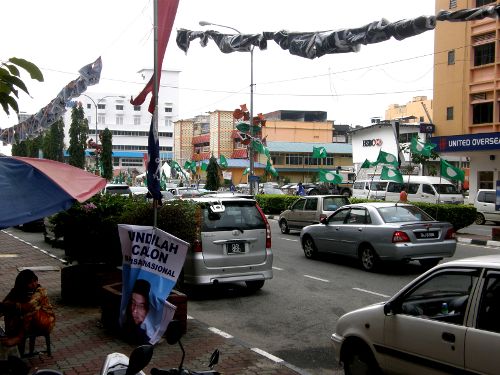 It’s all happening here: KT town is ‘chocker block’ with vehicles from KL and elsewhere.

1600: The place is swarming with many out-of-town registered vehicles especially from KL, Kelantan, Pahang. You can tell by the number plates – and the vehicles look different too, large high-floored SUVs, many of them black (I don’t know why so many of them seem to prefer black). It’s so difficult to find a parking place in the town centre.

1530: Finally reach Kuala Terengganu! First thing, we venture to the waterfront in town, where as an eight-year-old, I used to try my hand with fishing at the old jetty, in front of the Customs building. The river looks a lot narrower but that’s because they must have reclaimed some of the land on the opposite bank. Nearby the gleaming Felda Residence tower seems to have been turned into a centre for the BN campaigners.

Along the way to KT, we take a break to gaze in awe at the majestic South China Sea, its muddy-brown, angry waves lashing against the shore. The journey takes longer than expected because we are driving along the longer, more scenic and rural coastal route from Kota Bharu to Kuala Terengganu, hugging the coastline as the rain pelted down. We cruise by picturesque kampongs and all sorts of beach resorts: Bachok, Pantai Bisik Bayu, Pasir Panjang… Surprisingly, the road signs in Kelantan on the coastal road heading south rarely mention Kuala Terengganu, so we have to stop and asked bemused locals the route to KT after a couple of wrong turns.  On either side of the road to KT, patches of open fields have been turned into large ponds or even small lakes because of the rain.

Finally, we reach the Terengganu border just before the busier town of Besut, where a police check point has been set up. The police wave our borrowed Proton Wira through, and we make the last 100km plus in good time over more recently tarred roads, sticking to the coastline almost throughout.

1014: A damp morning in Kota Bharu. We had breakfast an hour ago at a Chinese-owned coffee shop, just next to the hotel. The shop has roti canai stalls run by Malay women. Delicious roti canai served with chicken curry or fish curry along with local coffee. Just the right way to start the day – before hitting the road amidst a persistent drizzle.

I ask the Cantonese shopowner what it was like living under a Pas administration in Kelantan.

“Business is okay,” he replies in English (though he seems more at home in Bahasa), indicating what his foremost concern is. “But contracts, not easy.”

Will be leaving shortly for Kuala Terengganu, which is a two to three-hour drive southwards.

Hi,
there is a chinese old man, always sitting on a bench at the junction, just beside car workshop. he is one of the earliest settler in Pulau Kambing. He is already the fourth or maybe fifth generation of “Ahmad Ismail’s – pendatang”. So….we were here first compare to khir toyo. Ask people in KT, where is Pulau Kambing. everyone from KT knows this place.

Dear Readers, I am trying to reach RPK and PAS leadership through various means, indirectly, because I don’t have their contact numbers. Those have their numbers, please convey this message. I am from Kedah, voted for Pakatan in the recent GE. One of the issues that BN is telling Chinese voters in KT is “PAS will never respect other religious people, will never treat them fairly”. The Pakatan leadership can put a stop to this. PAS promised Kedah Indians that it will declare Thaipusam as public holiday. So far there is no news. This is the best time to make… Read more »

Hi Anil Welcome to Kelantan/Terengganu. I assume that you had taken the normal KB-KT road, and must had passed Jerteh (which is abt 12km from my hometown Kg Raja, Besut and should have arrived KT by now (2pm). Besut is the Tgg border district with Kelantan. Our eastcoast dialect is also sort of in-between, not so kelatanese nor so terengganuish… . . Ya, was pouring here yesterday, cloudy since Monday (was quite sunny last week) and drizzling on and off, today. Guess the rainy season is far from over yet. Hope it’ll be better next few days over in KT.… Read more »

What a wonderful day Anil!. I think you should try a pure

Nasi Dagang with curry or gulai ikan tongkol there.

for a place of that breakfast you may spend 1 – 2 ringgit only compare to here, what a cheap man.

Anyway, have a safe journey and take care.

On the way back, Anil, I suggest you try the banana leaf restaurant on Jalan Gajah Mati (think that’s the name of the road) in KB. The chicken curry is out of this world.

In Kota Baru, the in-thing is to have nasi lauk at the market. Wonderful thick fragrant curries with fish and whatnot. Something I still remember after 50 years.