The magistrate in the long-running arsenic protest case has acquitted the 27 accused after the prosecution failed to produce material witnesses in court. 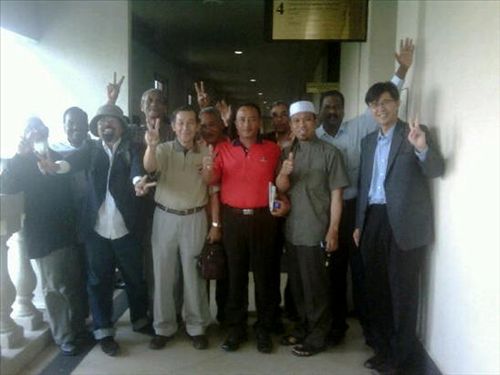 It’s all over! – Photo courtesy of Tian Chua

The prosecutors had failed to produce the seven remaining witnesses including CID director Bakri Zinin in court, according to Tian Chua, one of those acquitted.

The marathon case lasted 10 years and five months and passed through the hands of six magistrates and five deputy public prosecutors, he noted. Thirty were originally charged: two of them passed away, one pleaded guilty (and was fined), leaving 27 behind.

The accused had been charged with participating in a protest on 19 September 1999 over an alleged attempt to poison Opposition Leader Anwar Ibrahim with arsenic at a time when his first sodomy trial was ongoing.

Among the others acquitted are Hishamuddin Rais, Hatta Ramli, Sivarasa Rasiah, and Abdul Malek Hussin.