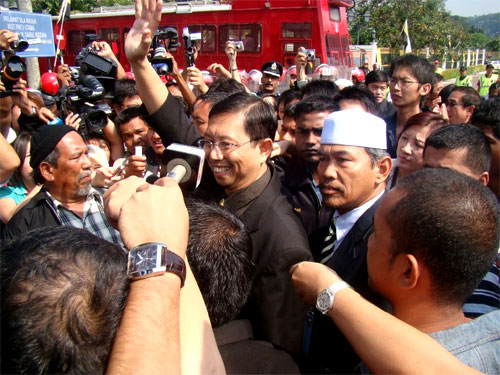 IPOH, Perak, Feb 10 (IPS) – During a tense press conference, in the midst of the current constitutional crisis in this state, peninsular Malaysia’s second largest, a reporter’s MP3 recorder/handphone began ringing.

The embattled chief minister Mohd Nizar Jamaluddin picked up the phone and pretended to answer it. “Hello? Oh, it’s Barack Obama, thank you, thank you, thanks for your support. I appreciate that, Mr President. I think you are wonderful.”

The reporters burst out laughing.

Nizar’s relaxed demeanour belies a steely determination as he engages in a battle of wills that has pitted him against the country’s Deputy Prime Minister Najib Razak and the monarch of Perak, Sultan Azlan Shah.

A member of the Islamic Party, PAS, one of three parties in the Pakatan Rakyat (PR or People’s Alliance) coalition, Nizar has quickly won widespread admiration that cuts across ethnicity and religious lines for his open and non-racial approach and his fiscal discipline in managing the state’s budget. Full article here.

Zambry may have won the MB seat (thanks but no thanks to the 3 judges) but has he won the support of the perakians?
Politicians nowadays must bear in mind it is the fence sitters and silent majority that determine the outcome of and election and not the diehard grassroot supporters . And after this perak episode, need i mention which side of the fence are these fence sitters going across to?

Nizar is an asset to the country.

Man of the hour! definitely one to watch.
Many are already talking about this man as the future PM of Malaysia .
If the soothsayer’s RAHMAN comes to pass It could be NIZAR and not Najib as the true legitimate leader of the rakyat

Dato . Seri Nizar….. Keep up the good work …..Dont give up the fight to correct these hideous act by BN and the royal.

I believe and i have faith that you will be victorious in the months ahead.

Najib and his evil party is the enemy of the people in the Silver state. Why? Because he is fully responsible for his power-crazy ego which has raped the constitution and the lawful guomen in the silver state.He has cuased a big mess and a major crisis. All the malays should remember this if they still love their Monarch. And now he is using the police to seize Harakah and Suara Keadilan from the poor newspaper vendors who are just trying to earn some meagre income for their livelihood. The Malays must always remember the cruelty of these **** and… Read more »

Think twice if the first thing that comes into your mind if it is s***.

Nizar is a great leader. Time will soon see him become the favourite man to lead the country. He will become a good Prime Minister. He will show to all Malaysians that an Islamic party can deliver the goods better than a race-based party. He has made every Malaysian feel that a PAS man is capable and fair to all. The support for Nizar and PAS will increase. HE IS A STAR THAT WILL GIVE HOPE TO ALL MALAYSIANS.

Pirates on the people Sneaking it quietly in the dark of night When the city snoozes comfortably They strike it quick and run When the people wake up in the morning sun High on the sharp onion shape ship The black and white flag flies The flapping sound singing so proud The whirring breeze sneezes The people get cold in their eyes The pirates claimed victory On a city through plots and twists On the deck the pirates dance Drinking whoring for all to look at The city of law abiding citizens “You are plundered You can’t do a thing!”… Read more »

MB Nizar might have “lost” a state,
but he won over an electorate.

Kudos to the Man.

Perak was won by guile, and the MB ousted by force.
Democracy? What a farce!

MB Nizar has won me over.

YB Nizar is now feeling very upset about losing his MB post which he feels is stlen from him, but I am sure he knows the law better as an Ex MB. There is no other way but to accept the realities of the Sultan decisions except to pray to the court to reinstil him instead of trying to cling on to it. If every one in the country behaves like him when they get sack there will be chaos. Let’s respecr the law and don’t act like one is above it.

…Since this illegal regime has come this far, they will just appoint their own Speaker and force their way in the State Assembly when it convene in April.

What the wicked dreads will overtake him;
what the righteous desire will be granted.
MB Nizar be cool!

We need more politicians of his caliber 🙂

Our constitution is written in a nice way, with check and balance of power. The sultan appoints the MB but he cannot remove a MB. A MB can only be removed from if he resigns or a vote of no confidence is passed in the Dewan Undangan Negeri. This is really beautiful, just that many people don’t realise the limitation of power. The Perak situation will become more interesting in the next sitting. The speaker is from Pakatan, and according to him the 4 frogs are no more state assemblymen, therefore he will not allow them to attend. It is… Read more »

You obviously dont know the meaning of the word ‘period’.

It aint over till the fat lady sings and we will FIGHT Barisan Najib and Najib Razak to the end.

he not yet resign. sultan cannot fire him.
silverland the state with two mb. another malaysia boleh.

A fighter and not a quitter.

Former no former, his government was robbed and BN will pay…

To Taipingite, If you are still so sure Nizar is the former MB and not so cool, simply have an election say between Nizar, Najib and who-so-ever Taipingite thinks is cool and see who have the last laugh.MB’s are voted in by the people not bought over by means too sickening to comprehend. Carry on Mr.Cool -between you, Anwar and the rest of emerging talents from Pakatan, its only a question of time before one of you becomes PM. Just a personal request, say a couple of your fluent Mandarin verses when you meet Premier Wen Jiabao and don’t let… Read more »