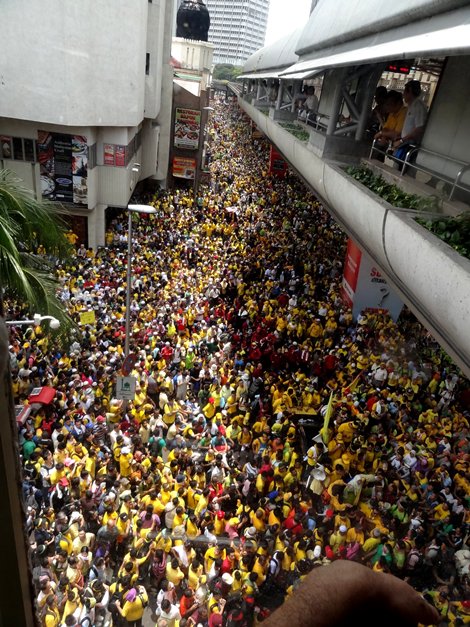 The Penang education department director has ordered schools in the state not to participate in Merdeka parades or celebrations organised by the state government until approval is received from the federal education ministry.

I contacted the Penang education department to find out if this directive was genuine.

At first I received the runaround over the phone as no one in the department was willing to go on record to confirm or deny that a directive had been issued.

After several phone calls, they eventually confirmed that the 20 August letter addressed to school principals from the Penang education department director was indeed released by the communications section of the department.

I finally managed to get through to the director, Osman Hussain.

He confirmed that the a letter had been issued, but did I read the ending? “The prohibition is only until approval is obtained from the federal education ministry. Education comes under the federal level.”

When asked why federal approval was required, he responded. “Do you know what the state level theme is? It’s Bersih (Clean).”

“Do you know what the federal theme is? It’s Sehati, Sejiwa (One Heart, One Soul).”

“The Bersih theme is sensitive; so that is why we are seeking federal approval.”

“We are telling the schools jangan pandai-pandai and jump in before we get approval from the ministry.” Osman added that federal approval had been given in previous years for Penang schools to participate in the state-level Merdeka celebrations even though the federal and state themes were different.

On these occasions, the co-curriculum unit of the Penang education department would invite schools to take part in the Penang Merdeka celebrations, and school bands would then participate.

But this year, the state government’s Merdeka theme is Bersih, Cekap, Amanah (Clean, Efficient, Trustworthy), which seems to have ruffled the feathers of the federal bureaucrats in the Penang Education Department. (Bersih is “sensitive”, you know.) That is an irony as the slogan was originally introduced with much fanfare by the federal-level Mahathir administration in the 1980s.

Bersih 2.0, on the other hand, is the name of a civil society coalition for clean and fair elections. The coalition is holding its fourth major rally in eight years dubbed Bersih 4 in the two days before Merdeka Day. Bersih 4 rallies are being held in KL, Kuching and Kota Kinabalu as well as in a string of major cities around the world.

Since 2008, schools in Penang have had to navigate between the education ministry, which is under the BN-led federal government, and the Pakatan-led Penang state government. Penang schools have been unable to invite state government leaders for their official functions. They were understood to have been disallowed from flying their flags at half mast after legendary lawyer and opposition icon Karpal Singh’s passing. Even distributing forms to students to apply for state government aid could land school staff in hot soup.

The larger issue is, education should be decentralised to the respective states instead of being heavily centralised in Putrajaya.

Why bother? Most of Penang’s young are going to Singapore and Taiwan anyway. They only come back when they are old and realise it’s too expensive there. What? Not all of them go? So which ones stay behind then? Oh. OK.

Singapore dollar now over x3 compared to ringgit.
More skilled and unskilled Penangites are eyeing to work there to make more money.
Do your children stay on to take of your old age or move abroad for own $survival???

The Malaysian ringgit has fallen to a record low against the Singapore dollar, with S$1 worth 3.0037 ringgit shortly after markets opened today.

Umnoputras must be so poor to accept the billions. Then the rest of Malays are worse than mosque (church) mouse. Who is the pea brain, syaitan or dunggu to say the donation is to fight against Dap jewish and the other telling is for helping against ISIS? Which is which? MCA n Gelakan must be playout by taikoh. They get telor and in return, they may donate to umno’s campaign. If donation, there must be an accounting. Where has the money gone? Boonmerang?

Using Jews as bogeymen to scare the Malays that they need protection from Umno else becoming bangsat?

2.6 billions dollars is a donation not Rakyat money.

Selangors DIEG (Darul Ehsan Investment Group) 3.7 billions cash and 30 billions assets are RAKYAT MONEY. IT IS HANDLED BY A RM2.00 COMPANY controlled by two directors not accountable to the State Legislative Assembly. HOW DANGEROUS !!!!!

ALL the actions against BERSIH are the work of small, unimportant but desperately trying to be relevant people. Truth is BERSIH 4 cannot topple the Najib govt, merely add problems to it. The Bersih 4 show is competing with the bloodsport and gangland war within UMNO. Its just NOT GOOD ENOUGH show for the distracted and frenzied spectators of the spectacle within UMNO/BN. Those people are not the natural participants of Bersih, they are natural audience, addicts of the gross show that UMNO/BN and Najib-Mahathir putting on..

The iconic Volkswagen Beetle which was used to promote the upcoming Bersih 4 rally was found to have been splashed with acid this morning in Johor Bahru.

Phua ; One former UMNO bankrupt that got out of favour make a report. The Swiss are investigating just like MACC, PAC and the Task Force so don`t jump to assumption and conclusion. What malu are you talking about. Are you still living in the coconut shell. Check out the list of scandals in the US and India that come to the TRILLIONS not counting thousand of others throughout the world. Marcos, Thatcher, Suharto to name a few beside the US and India

The PAC is now in limbo due to the ‘timely promotion’ of its chairman and 3 other members (by the PM himself) just days before the much awaited PAC questioning of the CEO and former CEO of the 1MDB. Why can’t the PM wait for another few days for the PAC to ‘clear’ his name? Due to seemingly heavy intervention from some ‘hidden hand’, the former head of the task force, the former AG, was summarily removed without undergoing due process just 2 months before his retirement. Just like the PAC, this again raises the question on the reasons for… Read more »

AG and IGP must speak up over allegations of efforts “by certain hidden powers” to hide the main witnesses involved in the investigation into SRC International.

Man’s greed. Happen everywhere. Even in Singapore Neilson brought down a bank. Without investigation like Watergate, how government going to improve and regulate? Here, it all trying to cover the backside, playing musical chairs and ministers suddenly more dunggu, pea brain, syaitan giving idotic answers

I am reminded of the directive that forbade
YB Hannah Yeoh’s old school from allowing her to
speak to the students there. And she was its former Head Girl too!

PHUA, She was trying to give a political speech just like Anwar was doing at UM. This is wrong!!

Teach students to be loyal to BN is acceptable but not to be bersih?

BTN is not political?

Sejarah syllabus in school is not political?

And what is so wrong about Anwar giving a speech, pray tell? Or is is only okay for the kleptocratic and amoral minister to speak (I use the term “speak” in the loosest definition)?

A former Head Girl who is the speaker of the state assembly is certainly the pride of the Alma Mater. But don’t expect the HM of the school to have the audacity to allow her to speak to the students there unless he/she is prepared to face the possibility of being transferred to the PM department.

Isn’t yellow one of the colours on jalur gemilang? Its also our royal colour. So cannot wear yellow t shirts on 31 August in schools???

“A vote of non-confidence is necessary now because Najib has made BN members of Parliament beholden to him by giving them lucrative posts in the Government,” Mahathir said in a post published on his blog late on Thursday.

“Even those who had come to me complaining about Najib’s administration before, upon being given posts in his government, have now changed their stand.”

Will Zahid Hamidi spring into action?

He is waiting for the durian to fall, just waiting !

“Bersih, Cekap dan Amanah” (Clean, Efficient and Trustworthy) is chosen theme for Penang. It was previously a slogan used by Dr. Mahathir and Jibby’s is not comfortable with it?

This CAT Penang theme is timely for MadHatter of Helang Island to undo his rotten legacy which has spawned decades of corruption mentality & habitual sins in gomen services. Why not invite him to Padang Kota Lama to shout Merdeka, Merdeka, Merdeka?
Karma is waiting for him to ‘bersih’ his own legacy.
Advertising agencies, pls take note. If you are doing campaigns for dish washer or washing powder, are you prepared to use ‘Bersih’ in your ad copy?

Loving your country and trying to save it from crooks IS patriotism. The IO 0 minister cannot understand BM. How to be an EDUCATION minitser?

Ah, now only I understand the word – “Bersih” has a (real) dirty meaning in Umno !
They are now even more decisive to ‘kill’ Penang I guess ?