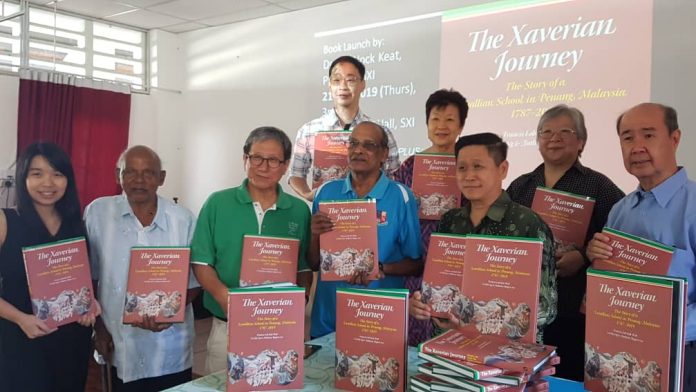 It was in the morning of April 1852 when three La Salle Brothers — Jerome King, Venere Chapuis and Lothaire Combes — approached Penang Island, its hills in the backdrop shrouded with jungle.

Once they entered George Town, a short distance from the port, they found the wooden and attap-covered Assumption Church, along Church Street, with a boys’ school and a girls’ school on either side of the church premises, behind which stood the bishop’s residence along Bishop Street.

The schools, set up by French priest Arnaud Antoine Garnault, had served the Catholic community who arrived in Penang in 1787, fleeing persecution in the north. Originally set up as Malay schools, they taught language and religion to pupils – before later being turned into English-medium schools.

The boys’ school, the St Francis Xavier Free School, would be transformed by the Brothers who arrived in 1852 and those that followed them into St Xavier’s Institution (SXI). 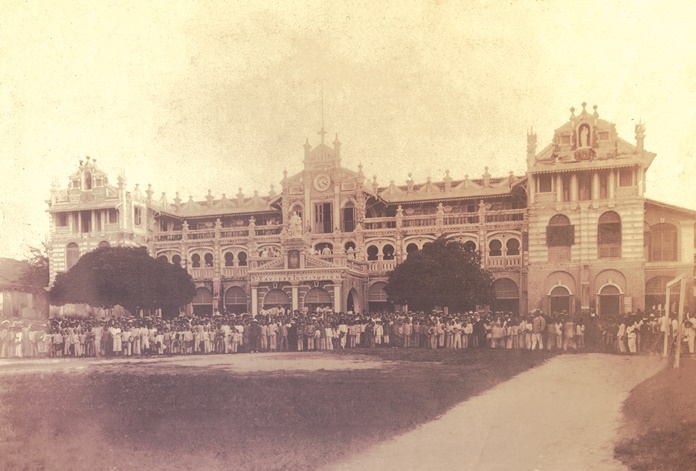 Now a new 173-page book, The Xaverian Journey – The Story of a La Sallian School in Penang, Malaysia (1787-2019) chronicles the tale of this school from its humble origins to a renowned education institution.

The book was launched by retiring school principal Sim Hock Keat at the Karpal Singh Hall in St Xavier’s Institution on 21 November as part of the George Town Literary Festival.

The book has a distinguished cast of authors: Anthony Rogers FSC, the current brother director of St Xavier’s Institution; political scientist Francis Loh, chair of the St Xavier’s Board of Governors and former president of Aliran; and Cecilia Ng, an academic with a focus on globalisation, gender studies and democracy.

Not only are the writers still deeply involved in the school, even publisher Chin Saik Yoon, designer Chin Mun Woh and printing company owner Dato’ Tan Leh Sah have all been associated with the school over the years. Every thing — from the texture of the cover and pages to the colour scheme — was painstakingly selected and designed.

The result: a finely crafted, lovingly produced masterpiece that chronicles the evolution of the school from humble origins in 1787 to the Brothers’ arrival in 1852 and then goes on to narrate how the school was used as a template for other schools to spread the La Sallian ethos and spirit across the peninsula and East Asia. 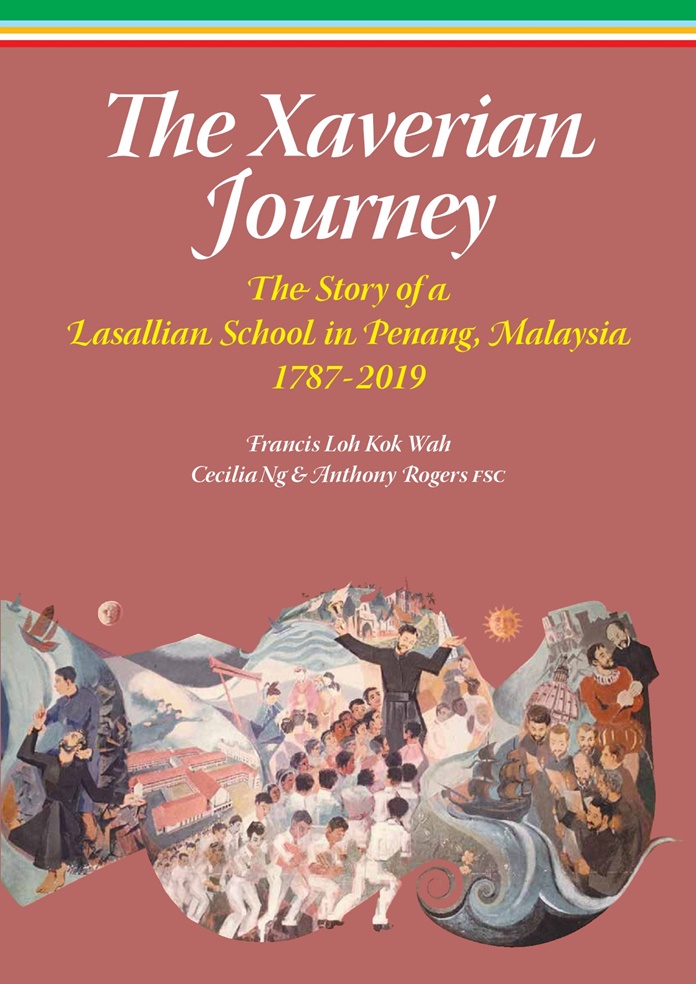 Meticulously researched, this book should be of interest not only to those who have passed through the hallowed classrooms and corridors of SXI. It would also be of more than a passing interest to all other alumni of mission schools in the region who are interested to know how the ethos of St John de La Salle arrived and took root in this region.

As expected from the cast of writers, the school’s journey is placed within the context of a land coming to terms with British colonialism, the suffering under Japanese Occupation, the hope of independence and the challenges mission schools now face in contemporary Malaysia.

It is not just a book but a treasure trove of historical information, packed with rarely seen photos and portraits. One of the gems is a sketch of the La Julie, the ship which brought the first six La Salle Brothers and six Infant Jesus nuns from Antwerp, Belgium to Singapore in 1852. Br Jason Blaikie had snapped up the picture during an auction. Many other historical records and photos in almost every page were retrieved with the help of Uncle Vincent Michael, who served under by eight brother directors.

It was not just in academic achievements that St Xavier’s excelled but also in the inculcation of noble values through wholesome activities such as school clubs, uniformed units, sports, music and debates, which turned into lasting traditions and provided fond memories.

The book recalls the challenges faced when the school was absorbed into the national education system and how the Brothers adapted to this challenge. Br Charles, for instance, led by example and took the Form Five Malay paper and passed with credit.

At the book launch, Br Anthony Rogers reminded us of the meaning behind the journey.

The school lies testimony to a vision of faith, he said. “People without vision will perish.” But in Penang, the seeds of faith were planted and the vision of La Salle and those pioneer Brothers have borne fruit.

But not before going through pain and persecution, which the school and others endured during the throes of Japanese Occupation. The Brothers were imprisoned in Changi (Singapore), Taiping and Pudu and also placed in a jungle settlement in Bahau, Negeri Sembilan. The school was used as a Japanese base and barracks during World War Two but was then destroyed during an Allied air raid in 1945 as the British retook Penang.

Thus began a second period of reconstruction. Classes were held in makeshift attap huts in the school field, next to the Light Street Convent, while a modern new building took shape. 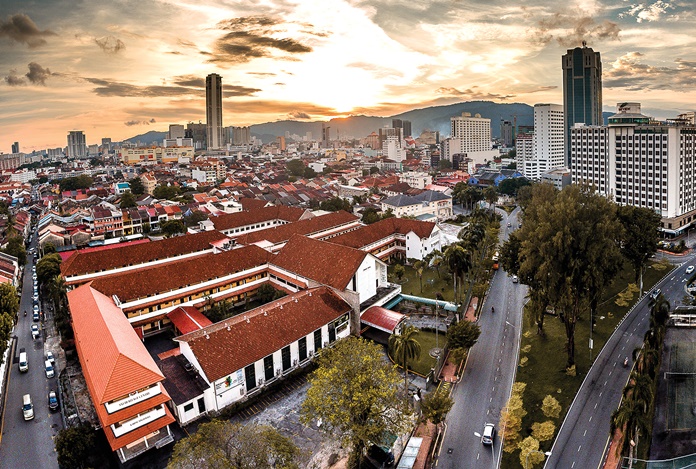 Later, in post-independence Malaysia, SXI along with other mission schools had to face the challenges of being absorbed into the national education system – and the pain that came with it: the loss of autonomy and identity as mission schools.

But when the seed dies, new life, new energy is unleashed, said Br Anthony. The school is embarking on new paths of inter-faith encounters and dialogue while exploring the possibilities of decentralisation. It is opening itself up even more while never forgetting the La Sallian mission to cater to “the last, the lost and the least’.”

Check out sample chapters from the book here:

The book is available over the counter at SXI. All profits from the book will go to the school. For more information, write to [email protected]

This piece https://www.drlevinkind.com/cialis-tadalafil/ was first published in the Malaysian Catholic Herald.

Will tunglang kick off new year 2020 with something?

Hopefully anilnetto.com can be back to its glory days beginning a new decade tomorrow. Otherwise more people will follofollshunw tunglang to shun the site.

Not sure for how long can mission schools survive in this Tanah Melayu with Islamization creeping into syllabus even Zakir Naik also a n icon to be cherished!

with Pass’s die hard supporter like Milk Teh ‘s help…Malaisea’s is truly on his never return Virgin pleasure cruise to holland…..better go to the nearest exit before it is too late to save you some skin…

Soon mission schools also must teach Jawi?
Otherwise no funding from government?
So much for Malaysia Baru.