A few thousand youths are making a beeline for a conference and concert at Taylor’s University hoping to see a galaxy of celebrity speakers and stars – but little do many of them know that a VVIP is also expected to turn up.

The Youth Convention and Celebration will be held on 2 March at the Taylor’s University Lakeside Campus. It is being organised by 1M4U to promote volunteerism and to encourage youths to reach out to the community – noble objectives indeed.

This is one of the promotional images: 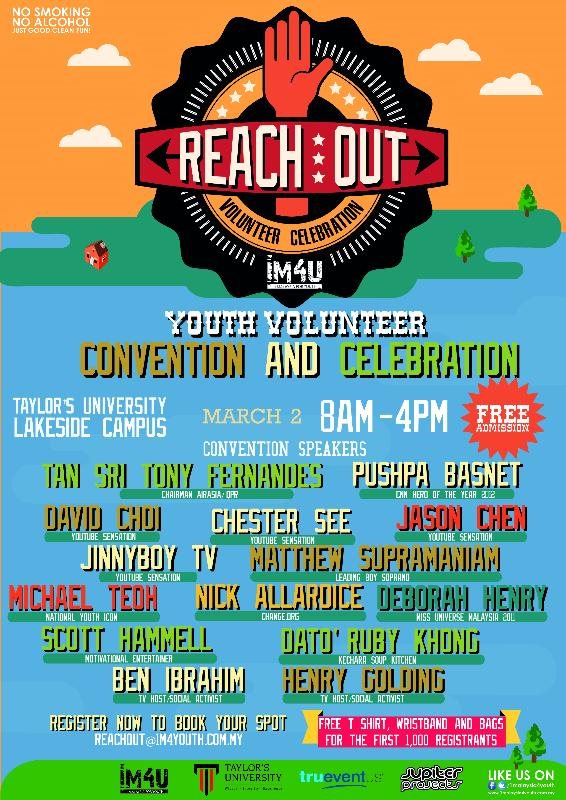 The day will begin with a conference beginning at 9.00am, but participants who have signed up are being told to be there by 8.00am. About 1000 participants are expected.

Later in the day, a few thousand youths are expected to flock to a concert from 4.00pm to 11.00pm. Many youths are excited over what they think is going to be a ‘cool’ event.

But they are probably unaware that Najib is expected to officiate at both these events. The promotional material for the event gives little indication that the BN leader is expected to be there. Have a look here.

If he turns up, Najib will have a ‘captive’ youth audience. After all, the 1M4U project is said to be his brainchild.

In recent weeks, the BN has tried to appeal to the younger set. Najib has already appeared at USM and Han Chiang College. More recently, the Himpunan Barisan 1Malaysia, attended by 2500 people (according to Bernama!), was held at UiTM, Permatang Pauh. (So are politicians allowed to meet up with youths at campuses?)

And now the action moves to Taylor’s University.

The narrative runs that Tony’s image team were responsible for associating their Prime Minister with a concept of “Cool Britannia”, when the PM projected himself as ‘hip’ and a popular vote catcher with the young.

In fact the concept was soon a laughing matter and Blair is now widely teased for his attempts to act the ‘ageing rocker’ clad in open neck shirts and gold chains, while he hob nobs with anyone rich enough to pay his exorbitant fees and expenses.

So let’s see what ‘cool’ outfit Najib wears if he turns up for this convention and concert!

That lying skank in Melaka had lion-dance drums to drown the “NO-NO-NONONONO!!!
Will Najib Razak use pre-taped “YESSSSSSS”? It’s fun watching them ‘drop-water-face’ and make a fool of themselves! They still can’t get it, the resentment Malaysians feel towards UMNO/BN! We want change!

Seriously but sadly our University grads are naive in general. I was shocked when I speaking to my son’s University grads. They are easily hoodwinked by Najib’s cameo. Many worship M Kutty. Now I realised why prospective employers say our fresh grads have so little knowledge but think they are top stars and know everything. So this even will definitely swing the fence sitters and reinforce the BN supporters

Can’t wait for another “Are you ready for BN?” fail again

No Need to wait for the question…. just give the answer… sing NO like a chorus all day long when he’s there… hehehehe

Then the flyover at Cyberjaya also collapsed.
http://www.themalaysianinsider.com/malaysia/article/cyberjaya-flyover-collapses/

Next BN to collapse?

I saw an old pic of Naj wearing flares with a Wynner’s hairdo. Yo, my man.

Puts things in perspective, doesn’t it?