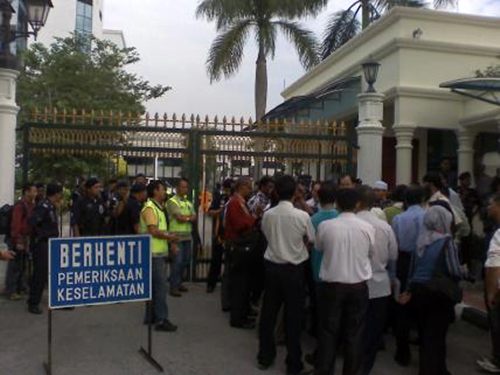 1548: Earlier, one DAP officer refuted the claim that the Perak state government personnel had not been informed of the Rights and Privileges Committee meeting this morning. “How could they (say that) when we faxed over to them the notification yesterday and they have acknowledged it?!” he exclaimed. “If they had not known, how come those uniformed police were waiting for us early in the morning? They have no business to be there to stop the people’s elected state representatives from entering the (SUK) building.”

1137: After being denied entry, the Committee has switched the meeting venue to a function room inside the Syuen Hotel coffee house. A press conference will be held at 1.00pm.

1102: Sivakumar has just been given a letter by the Assistant State Secretary denying him and the committee the right to enter the building. The reason? Apparently, no one in the state secretariat building had been informed of the meeting.

The meeting was called after the Perak State Assembly member from Pokok Assam lodged a complaint with the Rights and Privileges Committee about the 7 May sitting of the assembly. The complaint was about the BN assembly members holding their own “proceedings” while Speaker Sivakumar was trying to restore order. The Committee comprises five Pakatan Aduns and one BN Adun and is chaired by the Speaker.

1034: There is a situation outside the Perak state government complex. Officials including the police are barring Speaker Sivakumar and the Committee from holding a meeting. It was supposed to start at 10.00am but about 20 police personnel had closed the gate as early as 8.00am, reports an eye-witness at the scene.

… Where has the truth gone?
The UMNOistic BN had buried
the truth and the loyalty of
citizens of Malaysia.

so the HARAM speaker is now a legal speaker? Hahahaha
just wait GE 13…

Many of my pakcik makcik UBN before, but now already swear they won’t vote for UBN till die!

may the force be with you all PR’s men. Keep the fire alive but don’t overdo.

rumour from aides of high-ups within the BN has is that jib will call state elections in Perak before the next GE. I’m sure if he does, he will ensure that BN wins hands down, at any cost.

Siva is the Speaker and he has the right to do what he is entitled to according to law. The next GE will see the end of BN rule. A bad strategy indeed on BN’s part. No, the people had enough. They are not stupid. They want a total change. Ask the people in Perak and 9 out 10 want the people to decide who governs the State.

Looks like there isn’t much PR can do. BN has abused fully state machineries. The State Secretary ought to join UMNO.Its times like these that we hope for divine intervention to remove some of these… double crossers…

PR do not give up under any situations. BN is in their own dreamland.Rakyat is solidly behind PR.BN can’t rest and resorting to all kinds of tactics.

Good work PR. Keep it up. Let not the fire dies and amber turn to ash.

Well what can we expect from a Chief Executive of the state who makes an issue of a person holding a candle?

By hook or by crook.

Isn’t it laughable that the msm saw fit to publicize a 2 or 3 day old blog containing a really poor conspiracy theory about the death of Beng Hock when there are thousands of other blogs with more plausible conspiracy theories and whose owners would wish for the same kind of thoughtfulness to be bestowed on their conclusions?

Don’t you wish you could get some as well, Anil?