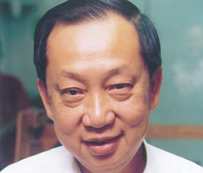 When asked whether any further action would be taken against Kin Woon, Kwang Chye said no, but he hoped that Kin Woon would not take part in any further events organised by the PKR.

A former state executive councillor in the previous Barisan Nasional-led Penang state government, Kin Woon is widely respected for his progressive, independent views. He did not defend his Penang state assembly seat of Machang Bubok in the 8 March general election, indicating his desire to step down from active politics.

He is now chairman of the Penang-based Socio-Economic and Environmental Research Institute.

Unsolicited advise by Chia is slowly destroying Gerakan, not the other good, innocent file and rank Gerakan members….Its unbelievable and magnificient that Chia has been behaving like Keng Yaik….whenever BN loses, Yak Yak just say Yahk Yahk to BN by blocking M2day….Yak Yak is already a servant to UMNO, not a business partner of UMNO…..Yahk Yahk, the people want you out…and also, Yay yay, rakyat win!!!u lose!!!Anyway, Chia pls shut your mouth when you have nothing but rubbish to utter, its disgusting you know!!!

Dr Toh KW a principled BN politician? How many of you know this guy personally? He is principled because he attends PKR functions? He attended Anwar’s open house just before Anwar was arrested years ago. Politicians are all alike. They jump here and there when things are no longer favourable to them in their own party. Do you see democrats crossing over to the republicans or the labour party politician going over to join the conservatives? This is because in Malaysia the politicians here have no ideological commitment and can change their stripes whenever the need and opportunity arise. There… Read more »

Friendly advice to Kwang Chye, stop issuing unsolicited advise, no matter how friendly it is supposed to be. Pay attention on how to salvage Gerakan and give Gerakan some life purpose for the few more years it has before it is being wiped out. Better still, pull Gerakan out from BN and you will realise there is actually life after BN.

Dr. Toh in PRK will help consolidate the multi-racial direction of PKR. This in itself would be a great contribution to Malaysian democracy.

I can’t help but wonder if Chia’s “friendly advice” hides a grudge regarding Dr. Toh’s support of the book that embarrassed the Chia brothers:

Ya and a note on the UiTM protest … all I have to say as a non-Malay is please look at yourself in the mirror lar… why need to even bother to protest. Even you open your university door wide also no … non-malay in their right minds will tick your university in the application form to go in. I had a brother in law working in a MNC, he said after interviewing a couple of your UiTM graduates, he concluded they are … USELESS one. So as you can see, no … company also want to hire your graduates,… Read more »

Agreed Devan, The country has gone to the dogs,with such stupid,pathetic leaders like Badawi,Najib,Syed Albar,Hishamuddin…we are fast depreciating in the South-East Asian economy.We don’t have capable and smart enough leaders to carry the nation forward.The BN regime is full of S-holes who are incapable to run even their own house.Mis-management is the order of the day,this is happening for the past 30 years,and its more rampant now. The nation has been robbed and the wealth siphoned off… We need a new government in the mould of Pakatan Rakyat.The Permatang Pauh people must ensure the BN candidate losses his/her deposit in… Read more »

Its time for Gerakan,MIC and MCA to dissolve and join PR.Just look what is happening …. a. Badawi supports no non malays in UITM. b. Malay extremist storm Bar council under POLICE protection.Just imagine if Hindraf supporters had done this….Murder charge for 31 people …evidence…a piece of ROCK. c. Students from UiTM protesting…future fanatics in the making???? d. Shahrizat proclaims JIHAD against Anwar!! e.Teacher in SMK gets better offer for racial slurs! f.PI BALA ….where is he???? g.Dr. Osman ….what happened? h.VT Lingam case..what happened? i.Policeman found dead in Johor??? Murdered ???to cover up? malaysia is going NUTS with this… Read more »

aiyoh … kinwoon r …. no lar … please lar anyone smart enough please reject this guy even if he apply to join PKR …. he has no vision and no b—- for anything that spells ‘progressive’ – jsut look at the state of penang when he is goverining it with ktk …. pathetic … this kind of so called leaders should be retired for good … they are useless liaw.

umno a sinking ship,lots of holes so much so captain also sleeping.

Ah Chye is no longer in the government and cabinet,so Dr Toh can actually ignore him.Ah Chye couldn’t even defend his Bukit Bendera seat which was won by someone who is 30 years younger than him.Ah Chye ah,if I were you,I would start study Chinese (though you are Chinese ) so that you could mingle with your fellow Chinese kaki as you have nothing much to do.Leave Dr Toh alone to do whatever he deems fit since he is wiser than you.

Gerakan is multi-racial and PKR is also multi-racial. there shouldn’t be any qualm if Gerakan members join PKR. many have done so. just like a fish, only the head remains, the body has left Gerakan and into PKRand DAP. we need changes. we need a strong PKR -stronger than PAS and DAP. of course a strong PR is what the people want. they just want a change. we can see this happening now. people are into PKR in droves. even this morning, over 655 have applied to join PKR in Permatang Pauh. this is a good sign for PR. spending… Read more »

Maybe Toh Kin Woon went to the PKR ceramah to size up the mood and atmosphere of reformasi in Permatang Pauh, an indicator of the mood in the whole country. He must have left with the impression that BN is a sinking ship and Gerakan is sinking with it. Face the facts, Gerakan isn’t going to recapture Penang within this generation. Without Penang, it either become an irrelevant party like PPP or leave the coalition to join PKR. Gerakan’s ideology isn’t so different from PKR’s. It has its roots in socialism and multi-racialism. But joining BN for 40 years has… Read more »

I dont know anything about this fellows.
But i knows Gerakan said there are no capable Indian candidate.

rajraman.RACIST GERAKAN – kick them out forever as sidekick of warlords.

That the Gerakan has again fallen in line with the bidding of their Masters, UMNO shows the complete absence of integrity, andresponsibility to the Rakyat they are supposed to serve. The BN-specifically UMNo havs always behaved in a typical “Anging dalam Kandang” or in plain English, ‘DOG IN THE MANGER’ way everytime they are defeated in past elections. Gy this, I am referring to the fact that constiuencies who have been won by Opposition parties in the past are “punished” by the BN as their elected MP/ADUN and thus the rakyat are left out in the cold by the ruling… Read more »

Never advise an intellectual with wisdom. Kin Woon must quickly enroll to PR. Your future is better in the multiracial context. Forget the party leaders and you make the move.

I have an idea, Have we ever acoounted the number of politicians, bussiness people, governmnet servants with respect to the population. Did we ever realise that government servants for their apple polishing attitude will “Kao Tao” to the politicians, bussiness people for their money face will bribe the politicians, politicians to convince the people will use the jounalist or media. The ratio of all these people, as to the voters, combined are so small than, why is the public, making the majority being fooled by this minority. My suggestion is if the political agenda of a party does not suite,… Read more »

I wish to say this to Kwang Chye!

When you need to decide between Party and Individual, take party if individual is idolizing.

When you need to decide between Rakyat and Party, don’t even think. Stick to Rakyat right away.

Now we are talking about choosing between Gerakan and Rakyat. Kin Woon has made his right choice. When is your turn?

Indonesia is doing it.
We can do it too (under new management, naturally).
Malaysia Boleh!

Take a look at this article from the BBC:

Kin Woon certainly doesn’t need any advice from the likes of Kwang Chye and others from the discredited Gerakan. Even when he was in the State Exco Kin Woon always spoke his mind on issues which were close to his heart. He is one politician who is sincere and principled and of outstanding character. He always stands by his friends many of whom come from all sectors of society.

Hey you Gerakan “leaders” out there You failed the people miserably! You abused the powers we entrusted in you. Finally, we had enough of your nonsense and that is why we voted you out. Yes out. And nowadays judging by your comments in the media, you are outstandingly proving yourselves to be more and more irrelevant. Each time I see your pictures in the media, I don’t know whether to laugh or to cry. The kids in my class prefer to laugh at such disgustingly cheap and shameful antics to get attention. Boy, let me assure you that you guys… Read more »

UMNO/BN owes a company rm 218 million.This is an atronomical sum
spent during the 2004 General Election!! Divide that to each parliamentary constituency and that is nearly a million ringgit spent on election parahenelias alone.Has not the UMNO/BN contravened with election laws?
What say you Datuk Rashid of Election Commission? One can deduce easily that UMNO/BN candidates spent well over a million
each during the last General Election!!

Insecurity about Dr. Toh setting an example for Gerakan grassroot’s to incline toward PKR’s multiracialism, instead of … pro-BN racism?