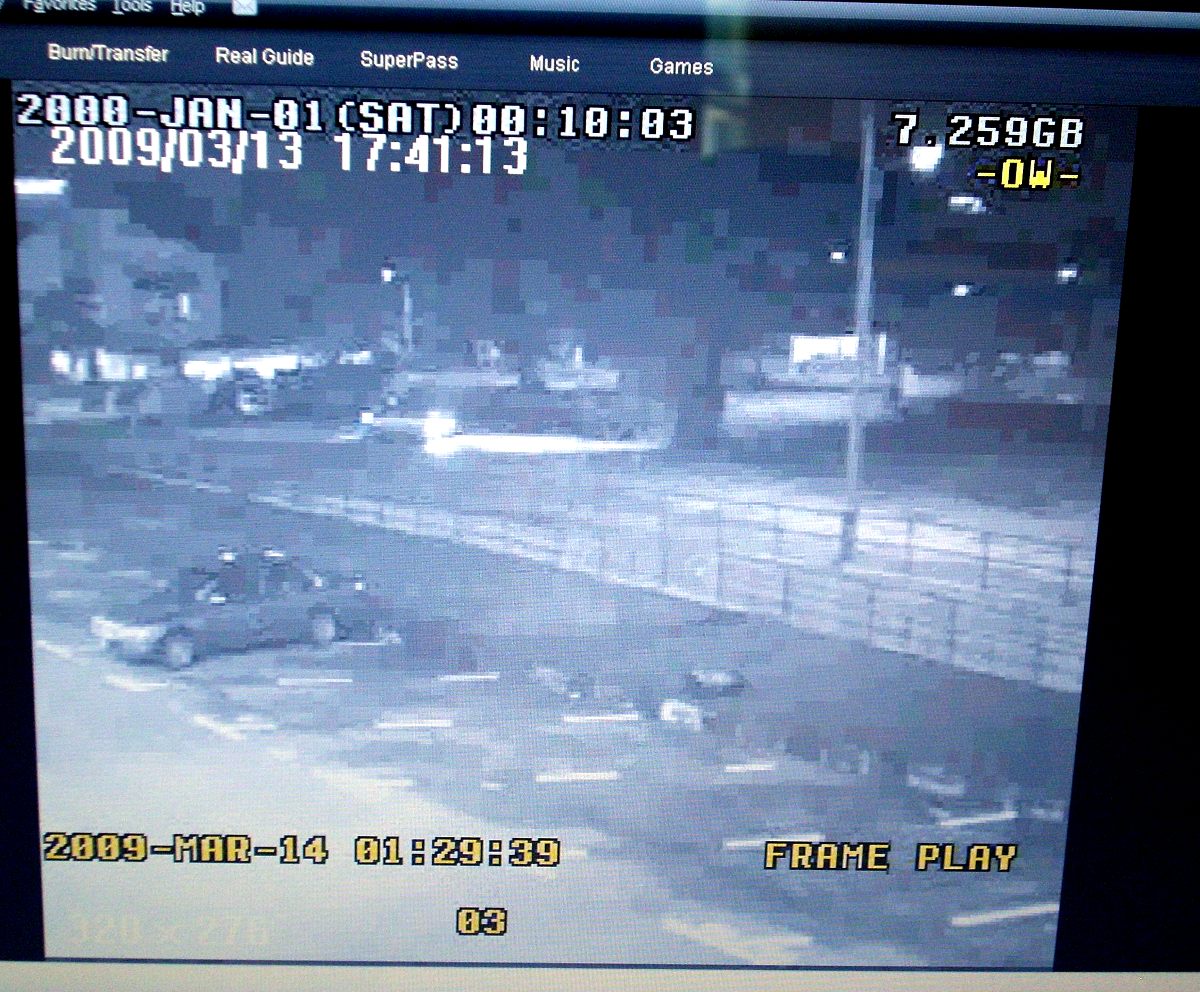 Friday the 13th, 1.30am: The light at the centre of the image is from the headlights of a car parking before a vandal alights to smash the Democracy Tree plaque – (Click to expand) Image sourced by Kinta Kid 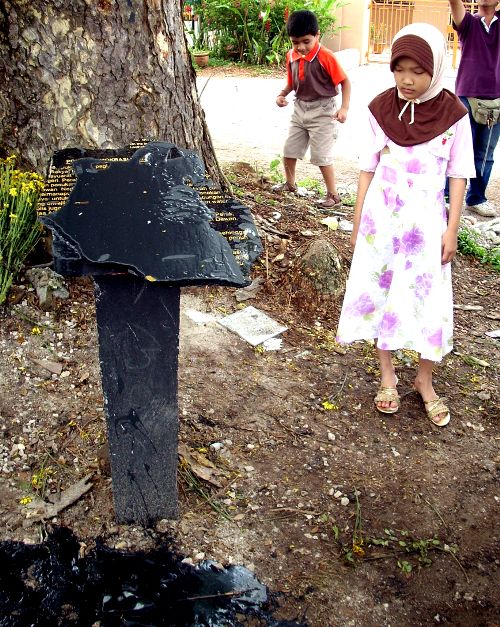 Smashed and scarred: A disappointed little girl looks sadly at what remains of the Democracy Tree plaque – Photos and images by Kinta Kid

The tragicomedy surrounding the Democracy Tree continues as the resourceful Kinta Kid reports from Ipoh:

The plaque was vandalised a second time today. This time the wording was covered with what appears to be road tar. The general consensus amongst all present was that it was once again a sad and cowardly act.

It was more disappointing for a group of 27 Keadilan Cheras branch supporters who had arrived by bus to view the “Democracy Tree”. Its Wanita head, Felicia Ling, said they had decided to visit the tree two days ago. But when they heard the tree had been vandalised on Friday the 13th, they brought forward their trip – only to discover today it had been further vandalised.

Their branch donated RM500 for the reconstruction of the plaque. At a press conference immediately afterwards, Nga Kor Meng showed CCTV footage of the first vandalism incident. “The incident took place at 1.30am…. One person…parked the car next to the tree and used a hammer to damage the plaque.”  He plans to upload the incident on YouTube.

(Kinta Kid had earlier reported here that a neighouring house had heard dogs barking at 1.30am that day.)

Those who want to make donations for the plaque may make out cheques to “DAP Perak” and write “Tabung Pembinaan Monumen Demokrasi” on the reverse side and bank it into Public Bank account 311-044-1003.

Meanwhile, the Ipoh City Council, now wanting to be left out, has taken up the cudgel. Someone from the Council stuck a memo (see below) on the tree on Friday the 13th which said the plaque was an “obstruction” to the public and had to be removed within 24 hours failing which the Council would remove the structure. The notice was not addressed to any particular person or party and did not have a mailing address. Instead it was addressed to “pemilik/pemunya” (the owner); so it was presumed it was addressed to the Democracy Tree itself. Either that or it could be addressed to Malaysians in general as many feel the Democracy Tree and plaque are now part of our heritage.

And so the comedy of errors keeps growing. There is only one way to stop it: dissolve the assembly and call for fresh elections. 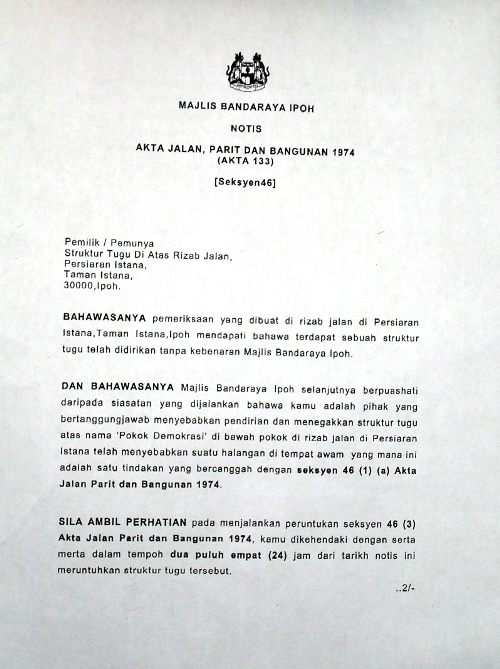 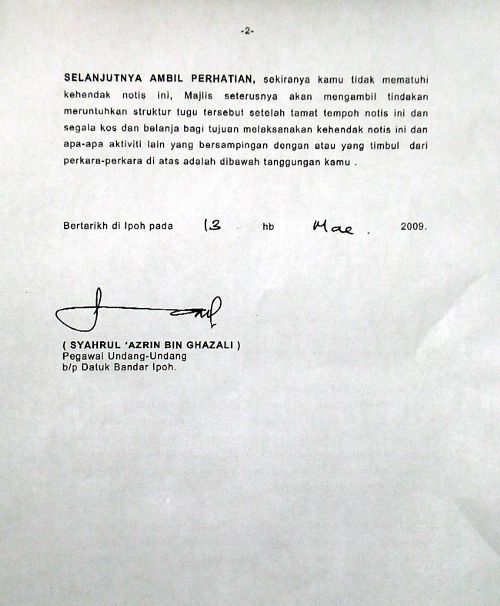 The bn govnt, black shirt illegal, peaceful assemble at home illegal, mention about atantuya illegal and not to symbolize democratic tree is vandalized. My dear umno/bn u r really dancing along PR tune. You won’t last long if this is to carry on. Your actions r creating anger among the raayat. This act is typical of your so many years of being in power which has cause you to drift further and further away from the raayat.Good luck! Everyone knows that respect is to be earned not forced onto us.Everyone knows except you guys r so dump or refuse to… Read more »

Raise the tree as a symbol of Malaysian democracy. If and when Pakatan formalises itself into a political platform, use the symbol of the tree as their political symbol. Contest the BN Timbang with the Pokok Demokrasi, showing the deep roots of democracy in Malaysia and the wide brances which cover every single one of us, regardless or race, culture or religion.

Timmy.I agreed 100% to your analysis.The Bn advisors or whoever they are ,,,,,,,,,,,,,,,,,,,are the flip flop type with no long term strategy or tactic.I sincerely advised the MCA doctor to QUIT before further damage are done to hie reputation!!!!!!!!…

This Legal Officer from MBI is as … as the Judicial Commissioner, who was wrong three times! And the Court of Appeal unanimously decided that the novice judge (according to N H Chan) was wrong. It is totally a no-brainer but Bee End/AMNO incensed the people of Perak even more. Good for the next GE that will see the end of Bee End/AMNO. NO to AMNO!
Cheng Poh Heng

Sybas to PR, kick the backside of Banana Nut!

Press on PR, rakyat is with your.

Please leave the damaged site alone so others who come to view this can see how shallow, obtuse the (culprits) are. If they fear symbols and a little notice, anyone can figure these morons will be UNABLE to figure the real issues of governance.

Every country is in the s***house over the dismal economy but our BN morons are busy disrupting genuine law processes and plans to enhance business activity. These STUPIDS are fighting the opposition and even their own people to just to stay politically alive. …

They say a picture is worth a thousand words. Go check out the picture of Najib on the Star Online.

For that, the Star deserves another two week closure, don’t you think?

YES!!!
i’m with you LBJ.
now we will have 2 monuments.
1 the tree.
2 the plaque as the monument of vandalism.

Aren’t all the city and town council officials in Perak and other Pakatan states appointed by PR?
Or hadn’t Perak gotten to replacing the old guard yet?

Yes, Timmy. Just like I’ve been saying all along. First, Anwar brags about taking over the federal government like it was the easiest thing in the world. Come on now. If you were setting up a business, would you be telling the whole world your plans?

Anwar’s game plan all along was about misdirection. Plant an idea into some people’s heads and the stupid ones will go along with it.

So what do you get in the end? Exactly what you wanted.

Let this plaque be as it is. It shall be a symbol of zombie culture that is made up of goons and vandals.

Yeah.. yeah.. another idiot trying to jump into the news.
Combined brain matter in the BN sides weight less than piece of …

This BN (has many) brainless goons (in its ranks).

Everyone saw that democracy plate was a mere plot by PR to agitate and invite BN to make stupid moves so that the rakyat will hate them further.

Yet, they blindly still fall into the trap.

I wonder when will the BN starts changing all their advisors. Really shows that no one can think properly in BN.

“Stupid moves” is one of the symptoms of a dying regime.

Don’t worry, nobody will be prosecuted due to “lack of evidence” Kes tutup.