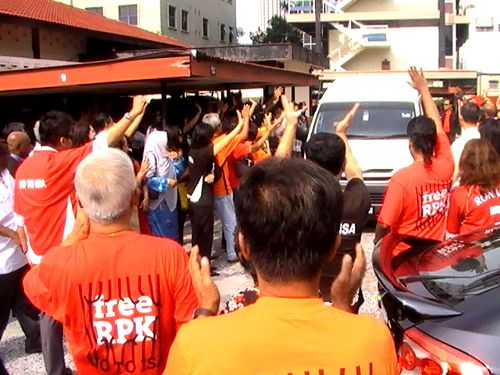 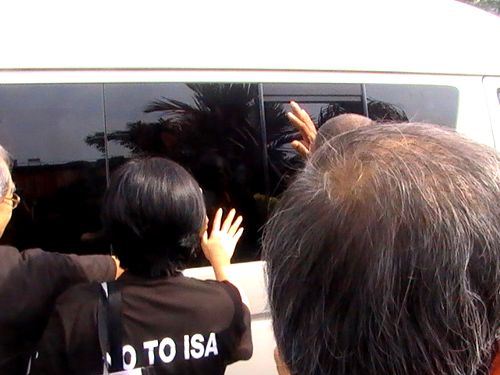 The crowd knocks on the side of the van: “We are with you, RPK!”

Many teary eyes around today. I won’t put it as disappointment. It’s purely sadness. I went into the courtroom to convey my support to Pete. I could sense something was wrong as Pete wasn’t himself today. I suppose he expected the postponement. My heart bled and my tears broke free. I wasn’t alone.

Perhaps you need to be here to understand. There is this special bond… a bond that binds all of us together like a big family. Yeah… a big compassionate family. A new era? Another new beginning? Certainly, a positive one.

Again, I would like to say this: It’s worth the sacrifice to be here!

[email protected] reports on what was supposed to be Day Four of the RPK trial:

0940: The van finally leaves the compound, much to the sadness and disappointment of those present, who had wanted to spend more time with RPK. Some quickly send out text messages to friends who had plans to come later. Everyone starts dispersing and reminding one another about the next dates: 10-12 November. We will be back! Long live RPK, Long live Marina, Long live the true rakyat of Malaysia. Long live Justice!

0930: People are still walking, oblivious to what’s happening. Well, everyone is reluctant to leave until RPK leaves. So, all of us wait for the familiar van to move out. We have a little more time to see the van ‘cos it is blocked by another car. The van backs up and excitement mounts as some of the crowd knock against the side of the van to let RPK know we are still with him.

The crowd continues to shout in Raja Petra’s direction: “We are with you!”

Then the van stops. What’s happening? “The driver needs to go to the toilet,” someone remarks and everyone bursts out laughing. I suppose RPK is also laughing inside. More pictures below

0900: What? Postponed?! Proceedings will continue on 10-12 November. Apparently, Justice Rozina Ayob is on medical leave, I think. Gobind comes out to confirm it’s postponed. A blogger tells me he expected it because earlier, he had heard something to that effect, and he said RPK’s facial expression was one of sadness. He’ll be going back to Kamunting then. My heart sinks; just thinking about it makes my eyes red. Take a deep breath; it’s okay; God will know what to do. 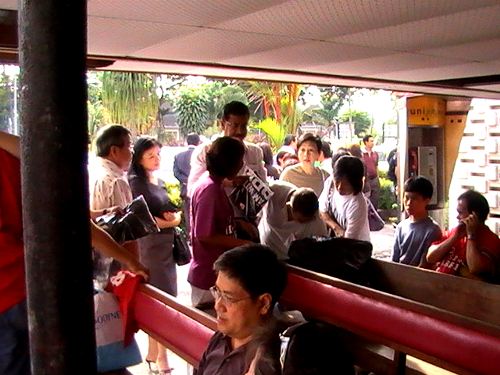 On a “cruise” to Freedom: RPK supporters waiting outside court

0830: People are still coming in; it’s a clear morning as the sun shines brightly. I talk to a few people about last night’s vigil. There were Special branch people last nght, but they stayed clear of the crowd. 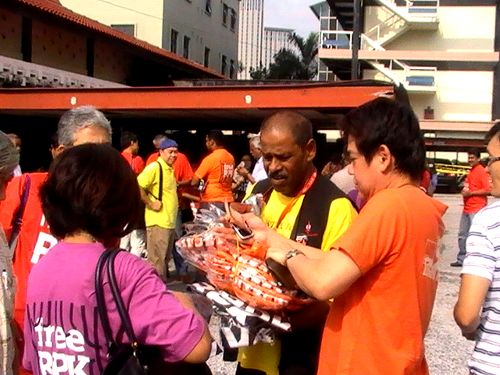 0800: Court room all full. At least 25 more are outside in the courtyard. This morning more new faces. T-shirts, hot items. I take a peek inside and see talking to his family and lawyers. Quite noisy inside, can’t get in.

MY ONE WEEK JOURNEY OF ‘AWAKENING’ HOPE with RPK and HIS FAMILIES. Well, suddenly – life back to ‘normal’ the same old routine and same old stuff to work on, pretty mandane?. RPK’s fault lah!! Of course Not, Im just joking. But thats how I felt. Its really a piece of my life that went along to Kemuning as well. But was it worth it? You bet! If I have to do it again, I WILL! Thats my resolve that I shall live a new life, worthy of RPK’s name and purpose. The rightous shall prevail! AWAKENING HOPE One week… Read more »

I follow the trial from afar and each time end up with teary eyes especially when I see photos of RPK in handcuffs. So, it must be harder for those present! This bond that bind us together is REAL and cross all barriers and distance!

I fully agreed with The Whisperer, I have made so many wonderful friends over the last few days at PJ Court.. We are like a big family, everyone of you with such BIG heart.. till we meet again, I am going to miss all of you..

and thanks Anil, for the update, I was late this morning and has been so down since..

[email protected] is such a mysterious person.. I wonder who he is. I was the one telling him about Pete’s facial expression is one of sadness. Many teary eyes around today. I won’t put it as disappointment. It’s purely sadness. I went into the courtroom to convey my support to Pete. I could sensed something was wrong as Pete wasn’t himself today. I suppose he expected the postponement. My heart bled and my tears broke free. I wasn’t alone. Perhaps, you need to be here to understand. There is this special bond… a bond that binds all of us together like… Read more »

We have a government and public authorities whose credibility are highly questionable. We have a prime minister who says something and does the opposite the following day. We have a deputy prime minister whose close associates are on suspicion in an inhuman murder. We have a judiciary that is … tarnished and appears to be dictated by a “correct, correct, correct” lawyer. We have a police force that is supposed to fight crime but (were) busy blocking roads to parliament. We have an attorney-general chambers that is supposed to effectively prosecute the murderers, kidnappers and the corrupt but (appears to… Read more »

all umno politicians speaks good english but the pityfull malay students in our schools dont know how to speak a word of english.thats the whole trouble. hisammuddind’s children all speak good english ….

Thank you for your very prompt updates on the RPK trial.

Btw, what is happening to Altantuyaa’s murder trial?
AFAIK, it got postpened twice and then in July, Karpal
wanted DPM as a witness which was rejected. Then RPK &
Bala made SDs, RPK got sued and detained under ISA
whreas Bala went missing.

So when is Altantuyaa’s murder trial resuming, etc?

After hearing the poor presentation from the prosecuting side, the poor judge, (could) be, suffering from bees buzzing in her head!
She needs this break and a mind clearing rest.

i wonder (why the proceedings have been) postponed… to next month. As we all see the latest news in MT about NAJIS’s (alleged) sms. He must be doing sth out there and our sleeping PM only know to avoid and take no actions to our calls for abolish ISA and release all ISA detainees.

Hi Anil, My husband went to the trial on our behalf this morning (Mon 13 Oct) hoping to offer our support to RPK and Marina only to find out that it has been postponed until November and they had already taken him away. We made a ‘Goodluck RPK’ gift for Marina but we’ll have to try and catch her at a later date. Thank you for your up-to-date commentary of events, Anil. We love to read your blog and no-one captures the essence of a day quite like you. It makes us feel so sad that they will be taking… Read more »

Wondering aloud why Justice Rozina Ayob is on a month-long medical leave?

thanks for the update chief! I have to make it on of these days! RPK and his family need all the support they can get and thats the least we can do!!