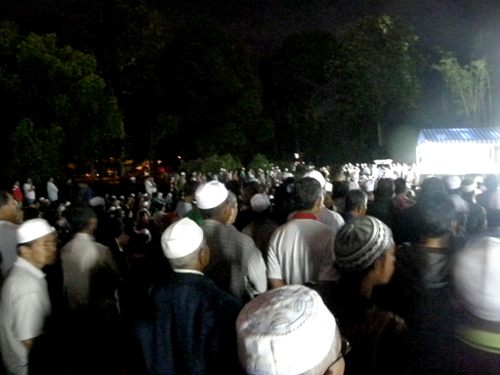 On the eve of the Bukit Gantang by-election, Abolish ISA Movement coordinator Syed Ibrahim Syed Noh told a crowd of 5,000 at a Pas event that even though Najib had released 13 ISA detainees, another 27 remained incarcerated in the Kamunting Detention Centre, not too far from the site of the rally.

Just who are these 27, some of whom have been held without trial for more than half a dozen years?

Syed Ibrahim said it was not enough for an incoming leader like Najib to release some ISA detainees as a some sort of “benevolent” gesture.  It may have been good PR, but it was not enough: the ISA itself had to be abolished.

To which the crowd, young and old, female and male, roared back, “Mansuhkan ISA! (Abolish the ISA!)”

We have come a long way since the opposition to the ISA articulated by a few lone dissidents in the 1960s. Over the years since then, the voices in the wilderness have swelled into a tidal wave clamouring for the total abolition of the act. Nothing less will suffice.

ISA a nightmare for many When police knocking on doors No prior notice they arrive Taking the innocents- politicians and activists Without disclosing the destination By its law Prison or lock up without trial The detainees’ families dismay on faces For law has no equality The fractured family units The social stigma and hardship flow The wives and children living in solitude environment For the detainees’ families may not know Why they are detained? What crimes committed? The years of sorrowful tears The government hasn’t come out in the open Hiding them keeping them prisoners Forgetting about their families The… Read more »