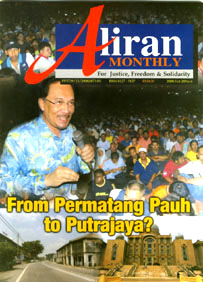 The folks at Aliran have been busy putting together the latest issue of Aliran Monthly in time for the by-election. And it has just been mailed out to subscribers. If you are not a subscriber, what are you waiting for? 🙂 To subscribe, just click here. Or you can get a copy from leading book-shops and selected news vendors.

This month, because of the forthcoming Permatang Pauh by-election, the cover story is immediately available online! Khoo Boo Teik discusses the significance of three recent elections involving small towns and goes on to the suggest that Permatang Pauh will be a major political battleground whose outcome will have national significance. For many Malaysians, Permatang Pauh’s mission, come 26 August, is more than about returning Anwar to Parliament. This town has a national choice to make. Barring massive electoral fraud, Anwar is one by-election and two weeks short of returning to Parliament. When he does, he’d be the Opposition Leader of a second coalition. After that people would want to know if he’d really form a new Federal government in mid-September as he has declared, promised, or threatened. Full story in Aliran Monthly

To The Winner, YAB Datuk Seri Anwar Ibrahim, “CONGRATULATIONS” on behalf of the Malaysian people in Australia. May God continue to Bless, Protect & Prosper you in all your undertakings for the Country of Malaysia. We believe in you & also know without a shabow of doubt that you & the people you choose will lead well & take Malaysia to another level of Harmony, Prosperity, Power & International Signigicance. To The Loser, namely BN, GET OVER IT & FACE THE TRUTH THAT YOU HAVE BEEN DEFEATED “NATIONALLY”. DON’T BE A SORE LOSER!!! Quote: In this age of “credit”, if… Read more »

Bravo DSAI. Malaysian badly needed DSAI to be in the Parliment ASAP, and thus be our next PM to lead the country toward Malaysian Malaysia.A NEW DAWN FOR MALAYSIAN. Inshaallah…

BN has resorted to all sorts of dirty tacts; but it will
not work. People to know their colour.

The time is too short and Brother Anwar will come out a winner
with Allah’s grace.

We all pray for him.

What printed is future-dated. Can we believe in what BN-Umno says?

This is the time in our nation’s history we are going to see a real change in the political landscape. The ongoing fight against abuse of power by The BN and the massive corruption in the government machinery, rising gas prices, the effects of racist policies by the BN government, access to fair and quality and affordable education for our childrens children, are just some of the real life problems we all face in our nation today. With the right leadership, and a change of attitude and focus, Anwar Ibrahim brings a new viewpoint to discover solutions to the problems… Read more »