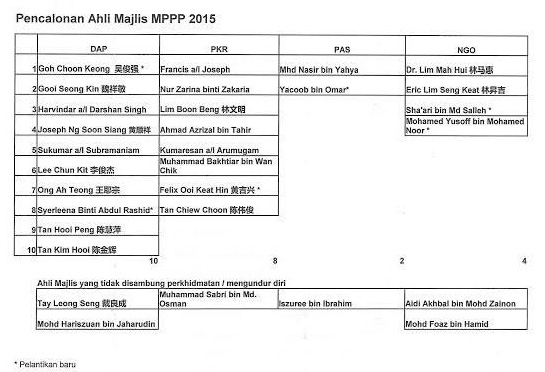 Penang Forum is a network of about a dozen prominent civil society groups in Penang.

Two other activists nominated by Penang Forum to represent civil society interests in the MPSP, the municipal council on mainland Penang, were not appointed. Instead, two other councillors tagged as “NGO” were appointed.

Over on the island, in addition to Mah Hui, three other “NGO” councillors were appointed to the MPPP, the Penang Island city council. (One of them is believed to be from a Chamber of Commerce.)

Are these five other NGO councillors non-partisan or representing the public interest? Which NGOs do they represent? Inquiring minds want to know.

Among the party appointees, newcomer Syerleena Abdul Rashid, a prolific commentator, is one to watch for the future.

While more could be done to increase civil society representation in the local councils, we should continue the campaign to call for the restoration of local council elections throughout the nation. This is important if the local council is to be accountable and responsive to the people’s interest as opposed to vested or corporate interests.

The state faces major urban planning issues. Incredible as it may seem, the Penang Island Local Plan, approved in 2007 under the previous administration and then again in 2008 by the present administration, has not yet been gazetted.

A Local Plan provides detailed information about what type of development and the density allowed at the neighbourhood level. So, without a local plan now, it is almost like a “free for all” in planning terms. This is a crying shame, whichever way you look at it. The old excuses for not having a local plan in force don’t hold water anymore.

What’s the point of being a ‘city’ when we don’t have credible and proper planning?

Local Plans are usually in the form of coloured maps showing in detail future development of an area. They show land use and the intensity of use, major transportation routes and hubs and significant landmarks such as heritage buildings and open spaces. They are usually accompanied by written statements and illustrations to provide more details. Local Plans are statutory plans, meaning that they are legal documents and must be followed by all parties, including the government and its agencies. Once an area has a Local Plan, the local authority does not have to conduct a hearing for nearby residents to… Read more »

Does a local plan require endorsement from the federal government? After the PPS incident, better be clear on this before the BN regime sabotages your effort once again, right Mr tunglang aka Siaboey Pek?

You cannot even answer a simple question and try to confuse others?

Do other states have local plans?

No local plan in Pahang and Johor.
Only Umno’s plan.

Good question awaiting clarification from any reader or Mr Anil.