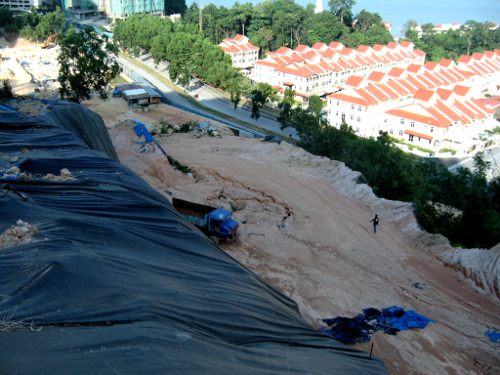 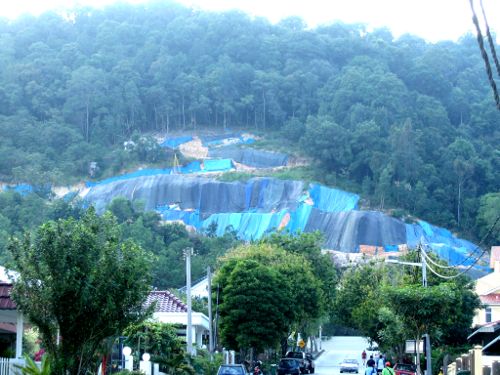 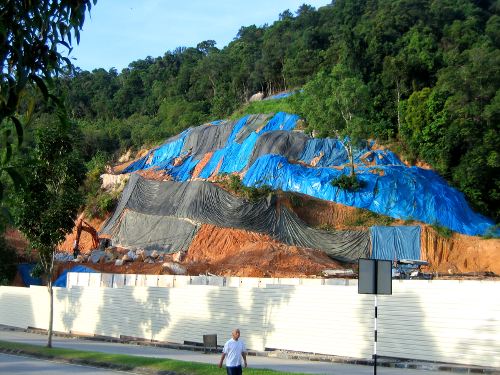 Just to recap, some one hundred residents of Tanjung Bunga protested at development projects on steep hill-slopes by banging pots and pans on Valentine’s Day. Many of the residents there are living in fear, especially during thunderstorms.

Before anyone else asks why these residents didn’t protest earlier, they did.

Actually many of us did vote PR for change. And we have protested previously for umpteen times. Our first protest was in the early 1990s, when the hill was first sold by Mr Chan Siew Teong to some developer. The then Chee Seng residents held an open dialogue with Koh Tsu Koon and Chia Kwang Chye expressing our concerns about steep hill-slope development even then. We have written, complained and appealed to the previous government since then – but to no avail.

Many of the Tanjung Bunga protesters, like many other Malaysians elsewhere, wanted change and so they voted for Pakatan in the last general election. They dumped Koh Tsu Koon and company because they were fed up with them.

Like many other Malaysians, Tanjung Bunga residents realised on 8 March 2008 that they could make a difference if they stood up and be counted.

But their support for Pakatan was not unconditional. It wasn’t a blank cheque. Voters wanted change, many of them  voted for change, and now they want to see real change. Pakatan now has the power, vested onto them by the rakyat, to make changes in the states they rule. Similarly, with the BN at the federal level.

Malaysians are now aware that ultimately, power to push through change lies in their hands; some of them feel they will be doing Pakatan a disservice if they were to uncritical of the coalition lest over time it morphs into a BN Lite.

Over in Selangor, state exco member Elizabeth Wong, now the victim of a malicious attempt to smear her reputation, has taken a firm stand against steep hill-slope development projects and environmental degradation. Her strong stand would have antagonised powerful interests in Selangor – but she acted in the interest of the people.

Likewise, the rest of Pakatan Rakyat must always act in the people’s interest to safeguard the environment and public safety.

When PR gives out permit to developers to build hill slopes houses/apartments – Blame BN, BN legacy, PR are angels, Bring cash to the state, good idea, it is impossible to stop the project, bla bla bla

I specifically came to Tg Bungah and bought a house in 1976 and have lived here since 1986. I was proud to be a Tg Bungah resident until super condos mauled our beaches and multi-million Ringgit houses destroyed our hillslopes. I hope the Pakatan govt will not approve any new projects of these kind. What had been done by the previous is understandably very difficult to undo.

A lot of people who bought condos/houses on hillslopes are now protesting the new projects. What IRONY!

If the developers advertise tall buildings on slope, you Penangites must be a hero and yet stupid to rush and buy them. If there is no demand, the developer will either abandon the project or turn them into other worthwhile buildings. We should really sit and examine the project was approved under which Government rather than start to pin point. As we know, any project takes time to get a DA approval and then a BA approval – years. If they are approved fast, then it may be fishy. Since the project is ongoing, the local council should impose additional… Read more »

Forget the innuendos and hidden agendas and the developers who leave their comments. Fact: since Highland Towers, about 20 major landslides have taken lives, limbs and properties. That averages out to more than one each year! And considering that we’re building more and more, the statistics aren’t going to get better. Why don’t we get similar statistics for other engineer-designed projects; why aren’t building towers collapsing at similar rate, one each year? That’s because geotechnics is a very imprecise science. It is a science of many assumptions, and very, very costly to implement. Slopes have to contend with ever-changing variables… Read more »

So George Aeria is hopping mad because he is directly sleeping at the foothill of this dangerous slope. What is wrong with that? The lady’s condominium is sitting on a slope which is only a mere ten feet from the blasting and escavation; another is afraid that her property price might drop; another her view. So what is wrong with all that? To a large extent everyone has their own backside to take care of isn’t it? So what is wrong with that? THE POINT IS THE DANGER IS REAL, AND LIFES ARE AT STAKE. And, Anil can see that,… Read more »

Pakatan politicians think that they have 5 years to run the states. Reality is they only have a single day to do the work. Elizabeth for example with the kind of problem she face now, one may wonder how she going to do anything good for environmental. She wasted all available opportunities given to her, she never take the time to study all the proposals sent to her, just ask her assistant who know nut about environmental issues to deal with all the lobbyists. End of the day the best she can do is to sit on the proposals. Now… Read more »

We have too many politicians who pay lip service to what they believe. Even for this Elizabeth Wong who claimed to be an environmentalist with ambition to change how the government is being run. Upon assuming the exco with portfolio in dealing with environmental, she simply has no time to sit down and plan for any thing environmental. The only thing she is interested is to follow Wan Azizah running around. She should be made assistant to Wan Azizah than an exco. Sorry for being critical to her at the time she is suffering from the Nude pix scandal. Just… Read more »

i would suggest we champion the cause of nature and the hills instead, put aside those people already living there, the hill development must stop.

Chee Seng residents, I also pity on you all but if you use general election to fulfill your request is stupid. If you vote for BN in 2013, do you think the BN goverment will change its policy. Work Minister has told you that BN goverment will continue carry on hill site development. Didn’t you get the message? Umno is behind all these issues. Money…..Money Chee Seng residents, you should go to the developer office to protest your displeasure and educate potential buyers to boycott this hill site development. Chee seng residents, don’t be so selfish. More than 90% of… Read more »

Anil, Amongst one of the protesters (I won’t say who except a local resident) who went to protest, protested not so much she was worried about the hill slope development. She went there because when she bought her property there, she was told that her view would not be blocked by new high rises. She was told that only bungalows would be built on the slopes in questions. When the property changed hands and the new owners decided to build high-rise instead, she protested. As she put it, nothing to do with security but being cheated of a view! I… Read more »

Take it from Tok Bomoh ni — these hillside projects are cursed. Count your losses and just abandon project now before you get in any deeper. Being responsible for another Antarabangsa is no fun you know.

This is not the work of one year or two. While I’m condemning such disgraceful act to ‘rape’ the hill, but shall we blame current govt? To the protesters, if you’re really a natural hills lover and environmental conscious, where were all of you when Coastal Tower, Marina Tower, Strait Regency were built? Bolton’s project is not the first project at that area. Why all of you suddenly appear now? More ridiculous is you can see lot of Coastal Tower’s residents also part of the protesters, WHY? Is it becos of dangerous hillslope development or yr beautiful view has been… Read more »

Why should PR pay for something done by BN and its cronies. The project was sanctioned and approved by Koh’s BN government and if PR were to withdraw the approval and cancel the project they will be taken to court. You and I know who the court will decide in favour of which will mean that the PR run Penang will be made to pay the compensation for the sins of BN’s past. Besides the BN government left the state in a near bankrupt state and is further attempting to sabotage the Penang govt buy with holding development funds as… Read more »

I am sure I have confidence that PR Govt should not be subjected to this. Like everyone says here, soil erosion will definitely occur if these projects are left abandoned. The previous Govt had given these developers the green light and all docs pertaining to it is already signed, so who’s to blame. However, Mr Lim Guan Eng, please do something about this. This project is nothing compared to the confidence we have in PR Govt. You are doing the best in Penang. Let this be another feather to your cap.

Agree that it is impossible to stop the project now. Just look at the pictures. These slopes are totally exposed and would need protection. We are lucky that it is not the rainy season now, but imagine in a few months time.
Where were the residents when the project started? Where were Andrew or George or Peter or Leanne or Ambiga or Leong or Terry or Mary??
Typical Malaysian mentality..we have lots of hindsight but no foresight……..

We have to stop the projects there. The existing residents there are more important than the developers or coming projects. They were there first and their lives and properties should not be endangered. Put pressure on PR to stop these projects. Otherwise, what’s the difference between PR and BN. BTW, why is the present state so quiet about all this?

Hi, Anil, thks for pics. May I know is that Surin project by
Bolton. Recently, they just had a sale promotion at Gurney Plaza
and i did ring them up but of course, they said, it is ok.

It is already too late to stop the projects. If you stop it now, the slopes are going to be left unprotected and the erosion would worsen. If we discouraged people from buying the units, the developer is going to slow down, cut cost or whatever…and that is bad news too. It needs to continue, and that is just too bad, because the slopes need to be protected. Next time, we need to protest and stop these projects before it starts. One example is the Solok Tan Jit Seng hillslope project. Once it starts, and the trees are cut down… Read more »

Anil, protest and threatened PR government for BN’s doing? BN set fear next to their door. Do the wise thing, move. Prime address means nothing if life is endangered.

Move? Who? The developer or the residents? – Anil

Hi Anil, Thanks for the photos – photos do tell more than a 1000 words! Let’s hold the MPPP to its words that no more steep (more than 35 degrees) slope project is going to be approved. Let’s go further to get the State Govt to extend this MPPP move to cover the whole state. Can some NGO come up with costing/financial implications (to the govt) if those Class 3 and 4 projects approved by the previous govt were to be stopped? The current State Govt should go through their records to see whether any terms or procedure were not… Read more »