Residents of Taman Golf in Ipoh have successfully appealed for the removal of a sewage treatment plant facing their homes. 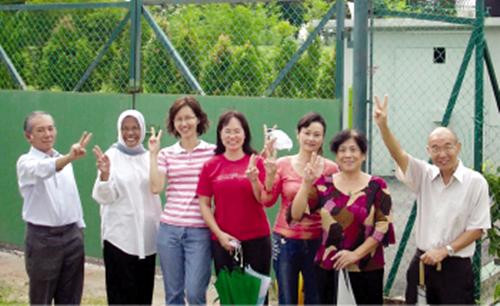 A three-person panel of the Perak Appeals Board, led by N H Chan, allowed their appeal and ordered the Ipoh City Council to instruct the Royal Perak Golf Club to dismantle and demolish the sewage treatment plant within a month.

The city council had not properly served notices to all  the residents to ask them if they had any objections to the structure. Approval for such a structure can only be granted if neighbouring residents do not object.

As most of them did not receive such notices – and they subsequently complained about the structure – the approval granted by city hall was deemed ‘invalid’ and the judge ruled in favour of the residents. Full report in the Ipoh Echo here.

Residents has the rights. The court made the right judgment. The City Council needed to compensate the developer for negligence.

Zambry who, Fatimah Zuhri? Zambry… the … salesman? Oh yes, we remember him well! We will help him advertise his wares come GE-13.

“According to former Ipoh City Watch deouty president (2004-2006), Ernest Balasingam, this successful appeal is a landmark case as residents have never before won a case against a local authority and more so where the local authority has had to pay costs to the appellants.”

– Fortunately we have righteous and incorruptible individuals like NH Chan.
Remember to give yourself a pat if you had voted PR in 2008.

Same problem we are facing with residents who complain that the have poor cell phone reception. When we put up towers to give them better reception, they want it torn down as these “arm-chair experts” claim that the radio waves from cell phone towers causes cancer.
Or they want it located far away. “Hello!! anyone home??” We cannot put these towers in the middle of Gunung Jerai and expect to get perfect reception in Island Glades.

It’s always easier said than done especially when it does not affect you personally – the smell, the negative fengshui energy and the floods onto your property.

Sometimes a win is actually a lost. Social harmony is about understanding and accomodating each other. When an appeals board had to step in and side with one or the other then there is no real harmony. Sewerage system is everywhere in a built up community. Even in the homes of all those residence there is some sewerage system if a centralised system is not used. I would think that society is better served – and probably cheaper too – if the two parties had come together for an arbitrated solution. Arbitrators determination is different from the legal determination of… Read more »

Learn from Zambry. Rakyat probably need to know who sold them out first. Which part do you mean the part where he use two questionable figures to grab power. Is a joke because when the next PRU come around it will go back PR plus few more states and maybe Federal as well. The silent majority is probably tired of UMNO. So watch out.

“If only Kpg Buah Pala was called Bukit Cina…..”

Same thing, UMNO would have sold out whatever the name. In fact, it has emerged that even Kampung Melayu Tanjung Tokong was already sold by UMNO and the Gerakan eunuchs (you know UMNO helmed the Land Commitee)….

I don’t think LGE would learn anything useful as far as UMNO is concerned, except not to be like them.

LGE sould learn from Zambry. Nothing to be ashamed of.

Even if the residents are not the same race as you are, they still voted for you.

If only Kpg Buah Pala was called Bukit Cina…..

Good old N.H. Chan! He’s a jolly good fellow and one of the few respectable judges left in post-Mahathir Malaysia….

Hahaha! His Royal Highness Sultan Azlan Shah is the Patron of Royal Perak Golf Club. Don't believe it but it's true! What an irony eh?!!