Now that Anwar Ibrahim has been incarcerated, what will happen to the quest for reforms? Will it be derailed? Obviously, some people are hoping that this will be the case. 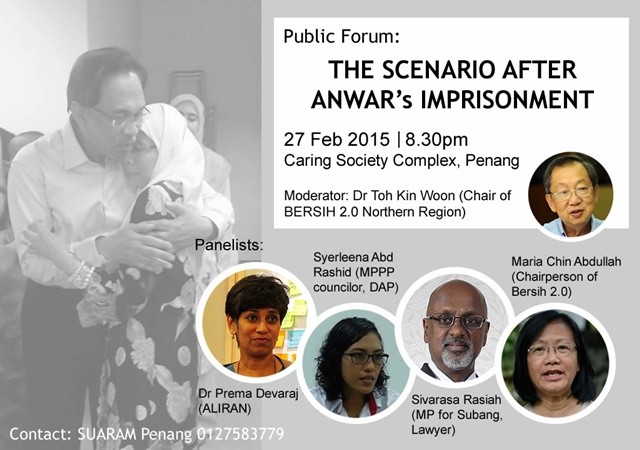 Anwar may have been the catalyst for the unleashing of the reformasi movement when he was arrested in 1997. But the quest for reforms began much earlier, decades earlier in fact.

While many may admire Anwar for his ability to unite disparate opposition parties and had placed their hopes of political change on his charismatic presence and his mediating skills, the quest for reforms is much larger than Anwar or even Pakatan.

It involves raising our consciousness to the next level, where we see ourselves as brothers and sisters concerned about justice and fairness not just for Malaysians but for all those who reside in our land, including migrant workers, refugees and asylum seekers. It means rising above the boundaries of ethnicity and religion that seem to divide us, so that we can actually celebrate our differences, our diversity.

It involves analysing our economic system to make it more inclusive, sustainable and participatory, rather than a means to further enrich the top one per cent, some of whom indulge in RM1200 hair-dos and jetset around the world on exorbitant shopping sprees.

It also involves exploring how the overused term ‘development’ has been used to enrich well connected and increasingly powerful corporations, which often prioritise profits over people. Is our model of development driven by contracts to favoured large firms and by FDI instead of targeted at the real needs of the ordinary people and their small- and medium-scale enterprises?

Are we able to see how some of the mega development projects affect the biosphere, further aggravating climate change?

This we have largely failed to do – we have not even discussed alternative economic models.

So yes, Anwar has been an important rallying symbol for political change – and he still has a role to play, but we also need to look at the wider picture.

In some ways, some of us may have over-relied on Anwar and failed to empower our own selves. We may have failed to analyse our economic system, which seems to disproportionately reward those who with Big Capital to indulge in speculative activity. We may have sat back in our comfort zones while relying on the Anwars, the Rafizis, the Kit Siangs and the Pak Samads and the Ambigas (enormous respect for what they have accomplished) to effect change.

But the reform process is more than just about one person or group of politicians; it is more than about Pakatan or public interest NGOs; it involves all of us in the quest to transform our land (not a superficial kind of transformation nor an unsustainable Big Capital-led model of development that disempowers us).

Now is the time to step forward and make our views heard and our position on justice, freedom and solidarity known while elevating our consciousness to the next level.

People will not forget how he fought for our rights and exposed how the people had been robbed. If the establishment think they can get away with their crimes, they are mistaken.

Really !!!!!. He start fighting only when he was sacked from UMNO. If he had won against Mahathir and became the PM and continue until today, would you still be saying that same thing now.

Lawyers are warning that police may use the Penal Code against peaceful protesters of #KitaLawan mega rally on March 7, since another law which regulates street demonstrations, the Peaceful Assembly Act, does not criminalise protest rallies.

gk ong ; Sedition act you people complain. And now penal code. To the opposition its better that there is no law or law to suit them. This is really a joke

Selective prosecution is a real joke.
Abuse of power is another real joke.

“Do not despise the snake for having no horns, for who is to say it will not become a dragon?”

From the great classical Chinese novel “The Water Margin”

Just because the water looks calm, it does not mean that there is no
crocodile(s) lurking !

His reform is nothing but a farce just to get himself become PM. PR will be disintegrated with PAS & DAP at logger head and PKR Azmin another dumb MB. In the early days when he was sacked from UMNO, he told the people that he has 14 crates of evidence shipped to the US for safe keeping. I am still waiting for these 14 crates of evidence. Pakatan DAP said they have a consensus of NO hudud between PAS & PKR. Now we know its not true. All these reform whatsoever are just Deception out to hoodwink the people.… Read more »

A song for Anwar:
‘I Shall Be Released’ from the blind audition of The Voice Season 8 last week:

Anwar had had all the opportunities to flee and seek political asylum in another country but chose to stay back to face the ominous possibility of being imprisoned. By doing so, he has deprived his political enemies of the chance to convince those who fought with him that he has ‘deserted them’ or ‘left them to face the music alone’. By not running away, he was also able to reassert his claim of innocence against an alleged fraudulent charge that reeked of a political conspiracy involving the highest order of the government. It is therefore incumbent for those who believe… Read more »

Ed G, To flee means that Anwar may not be able to come back anymore. Five years in jail is short if you consider the remission period for good behaviour. It could slice off 1/3 of his term meaning that he could come out in about 3/12 years