Some 100-200 people gathered at the Adam Adli vigil in Speakers Corner in Penang tonight. 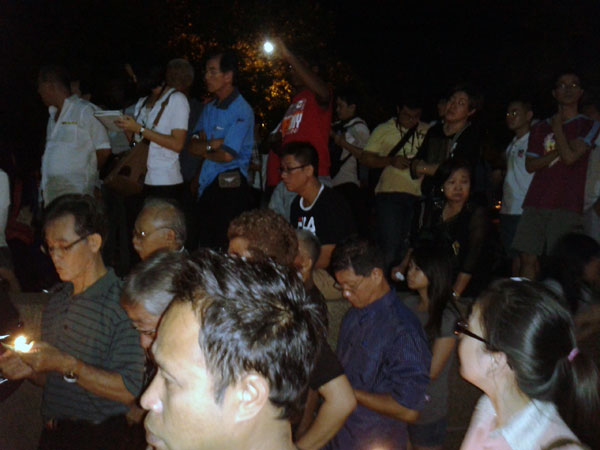 But they were heckled by a group of about 10-30 people, who started off by saying the vigil was an illegal gathering. “Why can’t you accept the result of the election?” they demanded.

@anilnetto the guy with a loud jailer at the back pic.twitter.com/PAgP2yRQQw

“Their loud hailer was more powerful than our small hailer,” said an activist at the scene.

The heckling and disruption began when a participant was addressing the vigil. The vigilers then responded by singing, “Suara rakyat…”

The event began at about 8.15pm but to avoid any unpleasantness with the rowdy hecklers, organisers decided to end the vigil at 9.10pm.

“It’s a very standard tactic to disrupt events like this,” observed another activist at the scene.

“They were spoiling for a fight,” said the first activist.

The thugs harassed the vigil participants even as they were dispersing.

The thugs, however, struck Chun Nam with a helmet while Chin Liang managed to escape, said an eye-witness.

Your description of them was exact..Rowdies.And may I add “low intellect”

What is happening to our country.
It is now controlled by thugs and mobster.
But as peaceful citizen we should not let this type of thugs deter us.
They are just coward and stupid idiot.
Their parents, mother and father must have felt ashamed to have such a son.
Those who are married are setting a bad example to their son and daughter
Their son and daughter will feel shameful to have such a father.
They are a disgrace to their country and family

What were the Police doing? Did they do their job that they did not know what was going on with their intelligence boys and SB working? Or was it a deliberate delay so that UMNO politicians can score a point???