A gathering organised by the Gerakan Mansuhkan Akta Hasutan was disrupted in Speakers’ Square in Penang by a pro-Sedition Act mob. 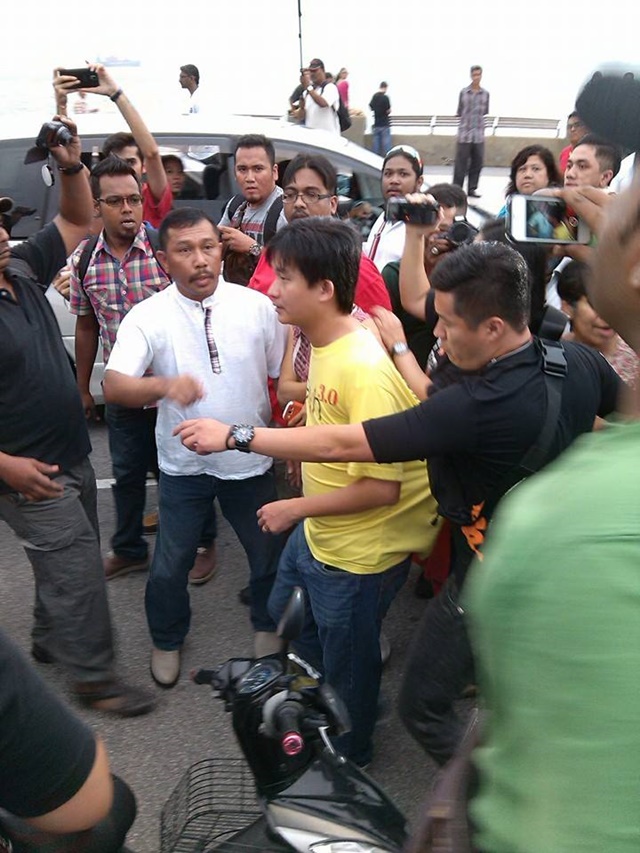 About two dozen hefties shouted at a few of the activists including Suaram coordinator Ong Jing Cheng and chased the group from the field amidst some pushing and shoving.

Jing Cheng was escorted out by police and activist colleagues from Aliran to safety as abuse was hurled in his direction.

I asked one of the police personnel present the identity of the group disrupting the gathering, but he said he didn’t know.

The intolerance on display appears disturbing. It is disappointing that people are threatened for exercising their right to freedom of speech at the Speakers’ Square.

It is usually cowards and bullies who attack those they think can’t hit back at them. Backed by a cohort of their kind, who they think can protect them, they are not afraid to victimize the vulnerable. Yet, if they were in the minority and there was a crowd of thousands surrounding them, threatening them with their mere numbers and presence, they will run for their lives with their tails between their legs, like the cowardly creatures they are. Such is the nature of bullies and bigots, who only own a delusion of power. The really powerful are those who… Read more »

These thugs should spend their time instead to take care of their sisters who could be easily influenced by IS ideology to go Syria as comfort women to perform sexual jihad.

How genuine are the HK protests?
http://www.informationclearinghouse.info/article39869.htm

Really, after what Najib said at MCA GA, there is no denying THIS is the true face of UMNO..Najib is in their corner even if he does not know it and certaintly won’t admit it.

SJ’s semen was found on CGY, was raped and her body dumped at a housing estate in Sungai Petani, after being abducted while she was jogging eight years ago.
Only now Shahril is charged for rape/murder.

Strange that DSAI can be swiftly charged for sodomy when it cannot be proven conclusively that his semen/DNA is in Saiful’s anus.

Harassment, threats and even physical violence are commonly used by those who do not have the confidence in their abilities for discourse, intellectual arguments or debates. Or perhaps these mobs (or the people behind them?) knew that the manner in which the Sedition Act is being used is simply indefensible by any sensible argument.

This is 1957 Chairman Mao’s Speakers Corner when he allowed them to speak and then arrested them during the Hundred Flowers Movement’………..

Without PPS, samseng will create mob to disrupt any peaceful gathering.

If this can happen at Speaker’s Corner, it could also take place at your door step!

Will police take action against the perpetrators?

get rid of pps so that this samseng mobster can create ruckus at esplanade ? pikir pikir masak masak !

Of course, the police answer to the question as to who the disrupters are was so obvious , after all they always choose the easy way out of any situation. Just like the recent bombing incident at BB they were very efficient, so they seem to be, they blame the incident to the triads. Who is there to dispute their answer or better still who is going to dispute their answer or their chosen scapegoat. What an easy way out of a sticky situation and also a quick answer to their ignorance of what is going on around the country… Read more »

Sometimes in order for a government system to succeed, a combination of authoritarian and democratic system is the answer. Too much democracy wherein one person could hold hostage the entire country or society is not good What happened here, Hong Kong and many parts of the world is because laws such as the ISA have been repealed which make it ineffective for the police to take decisive action. With the repealed of the Sedition Act, it will only make matter worse. What happen here and Hong Kong are two good examples where the police is unable to do anything due… Read more »

I suggest you listen to the English version of 海闊天空 “A BRIGHTER FUTURE” in support to Hong Kong’s democracy campaign:

I think Yang is not not thinking clearly, if at all, or I missed his skillful use of sarcasm.

Allow me to waste some time on Yang in the hope that something may sneak in … nah.

he seems to enjoy the number of ‘thumbs down’.

Have you tried Lim Kopi at Plan b @ Queensbay mall?

Is this the civilised, cultured way to 1st world 2020? Everyone has a birth-right to voice out, whether at Speakers’ Square or anilnetto.com or anywhere else. To use threats of physical harm & uncivilised verbal abuses showed this kind of species truly belonged to the political bullying … of gangsterism & losers. Wonder how the safety authority was conducting its SOP against violent individuals that day. Mind you, public safety is assured by safety authority without discrimination otherwise what is the justification of an increase of recruitments the past years. Suggestion: Anyone who wish to speak out safely @ Speakers’… Read more »

Free Speech Malaysia interviews John Wong, a law adviser regarding on the Sedition Act and its functions:

That big sized guy, weighing 200 kgs and above is Zul? Once a rugby player? Lives in Kpg. Pantai Jerejak? Used to work in Desa Bistari?

They always go after the minority.

Try to ask them to disrupt mammoth rallies like those organized by Bersih? They dare not! Just like Yang bodoh, always flooding the space here with his nonsense.

Thank you Kee, it is always good to see you too. I always read your comment but I seldom wish to interact with people like you know who.

Yes, I know a few of those guys. Disheartening. Bullying Yang’s kind. Always pick on this particular kind, but, you still see (some) supporting them, what can we do?

You may want to post this on your blog:

The President of Uruguay, Mujica

Perhaps the appropriate response is to photograph the toughs,
identify them, and post their details on the Internet.

Should also find out who their organisers and sponsors are and publicise these
too.

The Police just stood by while the mob was getting more aggressive. Maybe the IGP can clarify the role of the Police in controlling hooliganism. We begin to understand now why Penang had to have the Pasukan Peronda Sukarela (PPS) to maintain security and peace in the State! Peaceful gatherings should be allowed to proceed peacefully. After all both sides of the aisle have been holding gatherings!

This is an example of Fascist-type street politics, using
toughs to disrupt peaceful protest (freedom of expression)