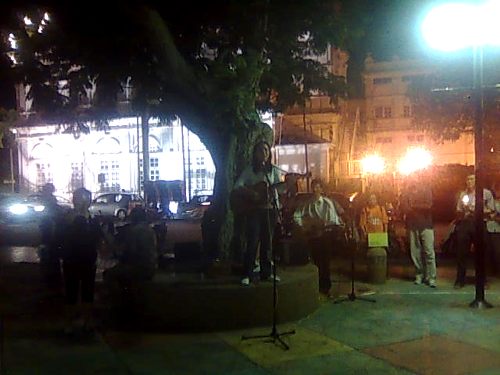 Paula leading the crowd with a freedom song 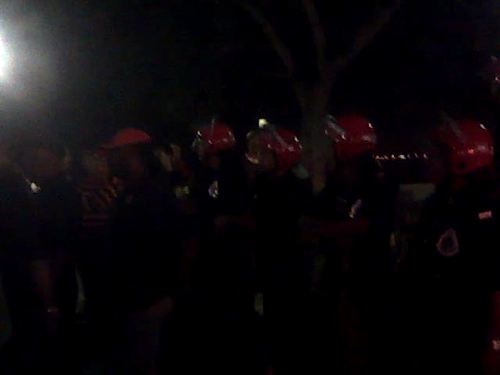 Riot police arrived as the event was winding down 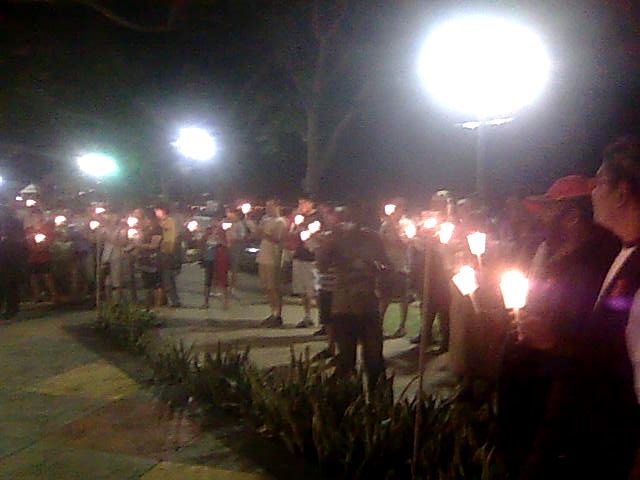 Shining the light for justice and freedom in the land

All eyes will now be on the vigils in Petaling Jaya and Ipoh tomorrow.

2358: The rumour goes out among those outside that B K Ong has been arrested. But Chin Tong confirms over the phone that B K Ong is safe and sound with him inside the station. The small crowd of about 20 outside the police station are now allowed to enter the premises.

She’s actually arrested. But probably (to be) released soon.

2258: Bukit Bendera MP Liew Chin Tong has been allowed into the police station. He tells me over the phone he understands that she has not been formally arrested but they are questioning her at the moment.

2154: Four or five activists and friends, along with several journalists, are now outside the police station. They have not been allowed to enter the compound.

2133: Singer-guitarist Paula Khoo was detained by police as the Abolish ISA vigil in Penang drew to a close after 8.30 pm, just about 30 minutes after it had begun. Ironically, Paula, who was the emcee for the night, was detained minutes after leading the crowd in a rendition of “Sing a song of freedom”.

As the event was winding down, police including about a dozen light strike force personnel arrived. An officer using a loud hailer gave the crowd ten minutes to disperse as the riot police stood in a row behind him. The crowd gradually dispersed, but unknown to many of them, Paula was quietly led to a police van and taken to the Patani Road police station.

When asked why action was taken on the vigil in Penang for the first time after six earlier vigils, a police officer told me that the organisers had not applied for a permit. He pointed out that if the organisers had applied for one, it could have been approved, but they never tried. He added Paula would probably be released later tonight after her statement had been recorded.

Several of those present at the vigil have now gone to the police station to lend her moral support.

The vigil drew about a hundred people at the promenade along the crowded sea front near the Esplanade. Among them were NGO activists, bloggers, MP Chong Eng and others committed to the cause of justice.

Will they really give permit? Quickly release her!!!!

Aiyo, now it is an offense for one to ‘Sing A Song of Freedom’…

Permit??? What permit are the police talking about?Look at the demo at the sri lankan embassy.Do they have a permit??? A whole loads of **** our police are!!!!