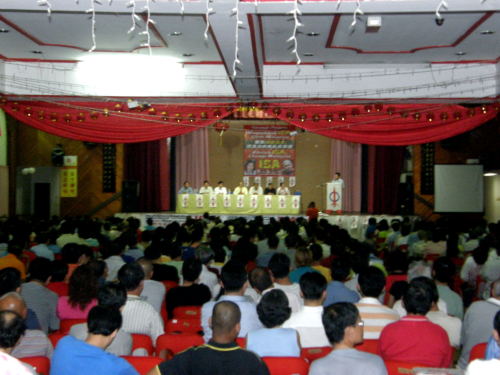 Despite Teresa Kok’s release, some 1,200 concerned Penangites flocked to an Abolish ISA forum organised by the DAP at the Penang Chinese Town Hall last night.

Among the speakers at the forum were MPs Liew Chin Tong and Chow Kon Yeow and Tunku Abdul Aziz Ibrahim.

Yes, it is great that Teresa has been released although her arrest, to begin with, clearly indicates an abuse of power by the authorities. Teresa’s point about why the authorities still have not interrogated others who are linked to the so-called reasons she was arrested for shows they were clearly politically motivated. What a travesty of justice. It is great that Teresa’s statement does not show she is cowed in any way by the cowardly arrest of her. Indeed, she appears to come out even more righteously fiesty in her fight for the rakyat and a better Malaysia. And more power to her – a sassy MP indeed.

Finally, this is yet another strong indication that the ISA simply has to be expunged from Malaysia. Only cowards using it still want to keep it for their own selfishness instead of protecting Malaysians.

And just a couple of hundred metres away, another 50 concerned individuals gathered in front of the Dewan Sri Pinang. (In the background is the Penang High Court building.) They sang songs of freedom and solidarity, read poems and chanted “Mansuhkan ISA” under the watchful eyes of about a dozen police personnel, who to their credit did not try to stop or cut short the event.

Volunteers distributed Raya cards for people to write messages in. These cards will then be sent to the ISA detainees in Kamunting.

Among those who turned up were a few of you blog readers, including regular Andrew, who often leaves comments. Good to meet you, Andrew!

I spotted blogger Amiruddin of the Wartawan Rasmi Laman Reformasi blog, who has more pictures of the event here. Mustafa too has pictures here.

In case you missed last night’s event, don’t fret! The Abolish ISA Movement is holding candlelight vigils every Friday night at the same venue until 17 October.

Meanwhile, the Cathedral of the Holy Spirit off Green Lane in Penang has opened a new candlelight prayer corner, where people can pray for the release of all ISA detainees, for the repeal of the ISA and for peace and justice in the country.

Great job to my fellow Penangites, unfortunately I’m in KL meeting up with some “reliable sources” talking about the imminent takeover of the country’s administration and couldn’t make it yesterday.

Nevertheless, I’ll be there on the 26th and it would be great to meet up with you, Anil.

Went to the forum at the Penang Chinese Town Hall. Many MPs were there, all chanting the same:
‘Mansuhkan ISA, kalau tidak, mansuhkan Barisan Nasional!”

Thanks for the mention, Anil. Nice to have finally met you in person.

so how about kl people? any activities/ campaigns against ISA and to free RPK & all other detainees this saturday and sunday???

If I may be allowed to remind ourselves of a famous quote from Edmund Burke, which is appropriate at this time:

The winds of change with Penangites leading the way again. Syabas fellow Penangites.