Reformasi activist Abdul Halim Abdul Hamid, 55, was given a sombre farewell at Masjid Al-Jamiul Badawi in Kepala Batas this afternoon.

Halim was involved in a motorbike accident early last night and passed away at the Seberang Jaya Hospital earlier today.

A teary-eyed Adam Adli paid tribute to his father.

“My father was a very friendly man,” he said. “He liked to refer to himself as Ayah to the people he met.” 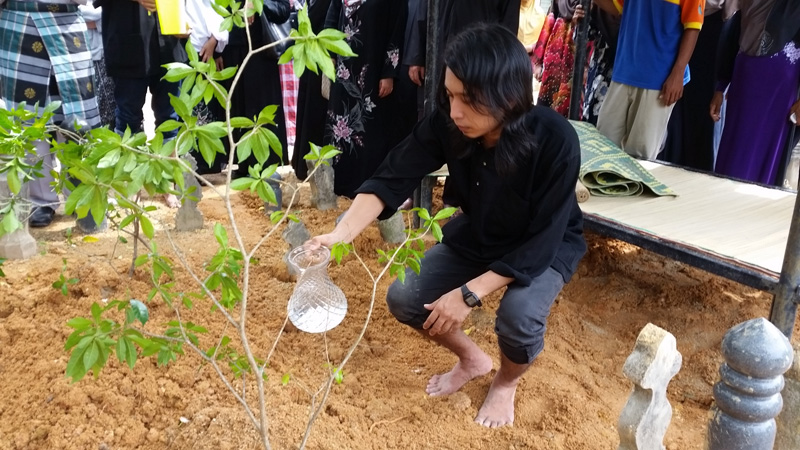 When asked whether he drew his inspiration from his father, Adam replied:

“The one thing he taught me was to question everything. I learned a lot from him.”

I told Adam his father would have been proud of him. He replied, “Hopefully.”

Also at the cemetery were Adam’s mother and his brother.

Rashid said he recalled meeting Halim during the 40th anniversary of the Baling protests last year. “I bought a book written by him – Reformasi Jalanan.”

Activists recalled that Halim, a former KTM employee, provided full support to his son and would ride his motorbike all the way to Kuala Lumpur to attend Adam’s court appearances.

Tasik Gelugor Pas information chief Abdul Rahman Kasim said his friend Halim was a Pas member, but of late he was more involved as an NGO activist. “He was more or less like his son. Whenever there was a demonstration, he would be right in front, putting on his vest with badges. At times, he would be up on stage with the leaders.

“He was a very nice bloke. I remember one day he told me Adam was thrown out of college because he had pulled down a flag in a protest. He was given marching orders from college and the college said he could appeal after six months.

“Adam consulted his father but Halim said, ‘No, don’t appeal’ as he felt the sacking was wrong.”

Halim’s sudden passing is a huge blow to Adam, who could have done with his father’s unwavering support. Adam is appealing a conviction for sedition and faces three charges under the Peaceful Assembly Act.

Rest in peace, brother. We never met, but our souls were always in communion.