No charges pressed!: Outside the PJ main police station this morning Photo by [email protected]

[email protected] at the PJ main police station tells me at 9.26am that the Investigating Officer there has told all those arrested during the 9 November Abolish ISA vigil in PJ that no charges will be preferred against them – though their details will be on file in case they commit future “offences”.

About half of those concerned are now going off to celebrate. Others have gone straight away to check out the Raja Petra criminal defamation trial, which begins today!

Just back to work from Duta Court to lend support to RPK. The RPK case (has been) adjourned to tomorrow morning at Level 3 court room no 5.

Check out Mustafa K Anuar’s response to the Malay-Muslim “NGOs” that have called on the government to take action against those opposing the ISA (photo of their demonstration from NST): 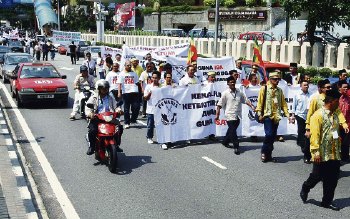 Wait a sec! Did they imply that the so-called ’Muslim and Malay unity’ hinged on detention without trial aka ISA? (Are they) associating this kind of unity with a piece of legislation that has long been considered unjust and therefore going against the very teachings of Islam that prioritise justice and compassion, among other important things in life? 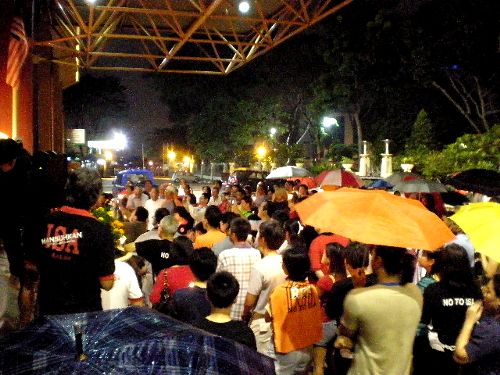 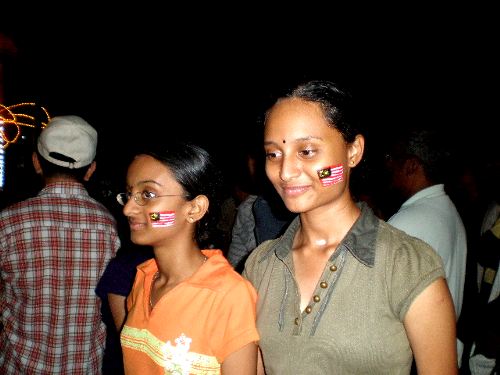 Rain, rain, and more rain. Refreshing throughout the evening.

Those present didn’t seem to mind the inconvenience. We had about 200-odd people turning up. If not for the rain, I’m sure we would have witnessed a record-breaking attendance.

The good news was that we had about 15 new-comers. More youngster are standing up to be counted.

PJ city councillor Richard Yeoh started the ball rolling by reminding the crowd about the conditions for this event.

Next was Haris, who thanked everyone for coming. He informed us that Norlaila Othman, an activist with the Abolish ISA Movement’s Family Support Group, was unable to be with us tonight due to urgent matters she had to attend to.

This time around, the events were mostly open to the public to share their reasons for attending these vigils. At least four to six people came forward and these were some of their messages:

Among those present were Dr Zulkifli of Pas, Sivarasa, assoc professor of law Azmi Sharom and a Methodist pastor (Sivin Kit tells us the pastor is Rev Anthony Loke).

The message that each one of them shared gave us many insights, different perspectives and a personal peek into the hearts of the rakyat. It’s the peaceful true bangsa rakyat spirit that we all have in common. It’s that pride of being a true Malaysian that we all yearn for, to recapture what was once possible so long ago now I can hardly remember. Can we do that again? Do we want to have that? A resounding YES.

The night ended with the singing of the Selangor anthem led by Richard Yeoh, who incidently has a very soothing voice with a patriotic feel to it. Of course, everyone sang Negaraku. Most of us have never sung so loud and so proudly, with so much emotion that tears can actually well up. Surely these are the feelings of ‘Love’, the sense of wanting to belong and the evidence that we do love Malaysia indeed.

Overall, it was a successful event by any measure because it’s not just the numbers (though that would have been great). It’s the will to begin or the first step towards a new Bangsa Rakyat. So, everyone, please continue to pray or take your first step with us in making history. Come, be part of this. Don’t take our word for it; see and judge for yourself.

Hmmmm… lit candles, faces shining with optimism and hope, hearts wide open, choral singing of anthems and hymns to national unity… and on Sunday evenings! The Abolish ISA Movement strikes fear into the Heart of Darkness because it alleviates the spirits of all who attend and who speak out against cruelty, injustice & the stupidity of greed.

I agree with what Dr Zulkifli said about keeping the ISA around for one week after PR takes over the gomen, so that the fellas who want to maintain the law can get to enjoy the comforts and delights of Hotel Kamunting before it’s finally closed down. 🙂

yes, we wasn’t charged today.
just back to work from Duta Court to lend support to RPK. the RPK case adjourned to tomorrow morning at Level 3 court room no 5.

Hmmmm… lit candles, faces shining with optimism & hope, hearts wide open, choral singing of anthems & hymns to national unity… and on Sunday evenings! The Abolish-the-ISA Movement strikes fear into the Heart of Darkness because it alleviates the spirits of all who attend and who speak out against cruelty, injustice & the stupidity of greed. Clearly, those who feel motivated to reclaim our country from the grubby, grasping hands of petty tyrants are the Awakened Ones, the potent embodiment of Malaysia’s glorious future as a flourishing collective of free peoples bound by love, friendship & trust. No wonder those… Read more »

Bob Teoh (who is also one of the fellow initiators of http://themicahmandate.org/) gave a very helpful (and humorous) speech here http://www

which I believe many of us can relate to!

The Methodist pastor was Rev. Anthony Loke who blogs here http://oldtestamentpassion.blogspot.com/ 🙂 I’m loading up videos as usual. So, need some time. And maybe put down some thoughts which came to me while listening to the various speeches.

It was a good gathering.

Hi
and Greetings to all who love peace,

Great news! Thanks for the quick update, Anil, as usual–ahead of everyone else. Keep the fire burning.