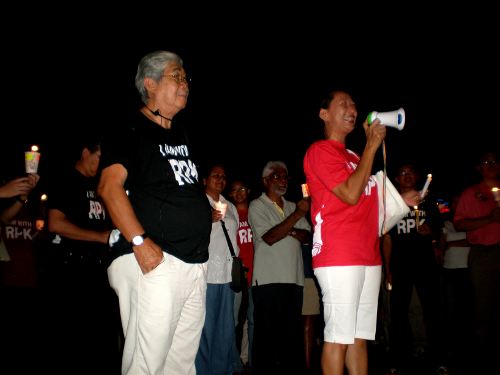 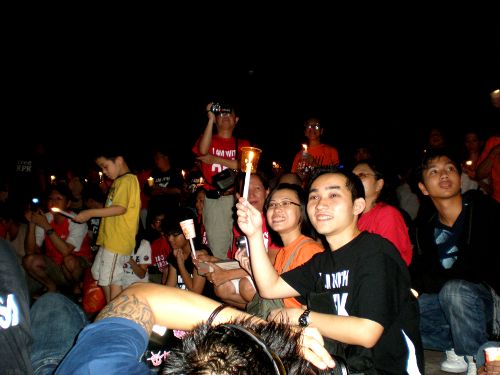 As sure as Day follows Night, we know that Light will conquer Darkness and Justice will conquer Oppression. Happy Diwali, folks!

Unlike the previous two wet nights, tonight was warm. The crowd numbered about 250 to 280. We assume some would have left the city due to the long week-end holidays.

It was great nevertheless; more new faces especially the younger ones. I could see more family groups turning up. Moms, dads, even grandparents were there. This was surely one of those outings that just bring families together.

The night started off with our great ‘Zorro’ asking the crowd to form a circle. Very humbly, he announced the night’s schedule and and explained why Haris could not be with us tonight. Zorro had arranged several speakers to update us and share with us current developments.

The first person that took the floor was a man named Michael. He had come all the way from Singapore especially for this vigil. The crowd applauded with great admiration. If only the PJ vigil was held on Saturdays, he would have come every weekend. Talk about support, ya?

Next was our ‘lady’: Marina began, “I cry a lot whenever I’m with Pete, I just cannot help it.” (I have to sit down now, it’s gonna hurt.) “I have to tell him to be strong because there are a lot of rakyat still with you.”

“That’s why this coming 7 Nov is important, not just the verdict (of the second habeas corpus hearing) but also to let RPK see that we have not forgotten him.” RPK thanks all his supporters and and asks all of us to continue to keep him in our prayers until justice is done. ( I also urge all of you, please come on 7 Nov, please.)

Our next speaker, Hishamuddin Rais, an ex-ISA detainee, shared with us what conditions were like under the ISA. I’ll spare you the details but once a person is in there, they go through different kinds of programmes. It’s never nice. His take home message: “Be brave!”

Now there are more middle-class and literate people coming out of their shell simply because the rakyat have grown mature. This was unthinkable years ago, until RPK helped us (the rakyat) open our eyes. The ISA can be used not only on the illiterate or the poor but on any of the rakyat. It’s outrageous. The ISA must go.

Next came a Catholic priest, Fr O C Lim, SJ, who was asked to say a few words. Yes, indeed a few words literally – because of his cough. In spite of being unwell, he make it a point to speak up. “It does not matter what your religion is, the ISA is simply against all God’s teachings,” he said, as the crowd broke into applause.

ust getting warmed up. Charles Santiago, the MP for Klang, who had just returned from an overseas meeting, told us that international VIPs had put their signatures down in condeming the ISA and asking for RPK and all other ISA detainees to be released.

“Yes, yes, yes,” the crowd responded. Last night, there were some 1,500 people had gathered in Klang, calling for the repeal of the ISA. All these activities are awakening the people. Good news.

“No to ISA!” the crowd chanted about half a dozen times.

Next came a politician, assuring us of the safety of this venue for gatherings because its within PKR’s jurisdiction. Bring more of your friends. And next year this time, we’ll do it differently. We’ll have our Deepavali celebration in the field too. The crowd applauded.

Sorry folks, by this time I had to leave my spot to catch some pictures from a distance. Other speakers continued with updates and encouragement. Perhaps others can report in their blog. It was quite warm, and I was sweating by then.

More cars were honking this time. (I suspect they are testing the waters, ya?). The crowd responded with cheers, occasionally interrupting the speakers. But everyone took it in their stride.

Like last week, the crowd had a chance to walk down memory lane, as Helen Ang led the singing of “500 miles”:

…and several other songs. Kinda reminded me of my scouting days. Met more new friends and bloggers.

My partner Ben suggested we get some pigeons next time round. That’s a brilliant idea. Mana mahu dapat? Em, worth thinking about, ya?

Over and out!
See you all on 7 November.

The turnout has dropped a bit, but the spirit was still there. The YB from Klang was Charles Santiago, after which YB Lau Weng San also spoke and assured the crowd that the field belongs to the MBPJ, which is under Pakatan Rakyat; thus there’s nothing to worry about doing it weekly or even filling up the whole field. The ex-ISA detainee who spoke was none other than Hishamuddin Rais! He was very happy to see the crowd, whom he referred to as middle class. He noted that back then, it was only the poor who fought against the ISA, but now the middle class is coming out.

Another speaker Chin Huat reminded us that 27 October 2008 is the 21st Anniversary of Operasi Lalang, the mass ISA crackdown under the Mahathir administration in 1987.

Mr Chua, PA for ISA detainee and MP Manoharan, also spoke on Manoharan and his wife’s plight ever since his arrest.

We saw many people who came from afar: from Penang we had Paula; then there was another lady from JB who stood up and asked, “Why isn’t there any candle vigil in JB? I come all the way from JB!”

Someone also told us that there would be a candlelight vigil this Friday at Seremban old Convent School near Terminal One. So please, for those who live in that area, it’s time to show your support.

The atmosphere was lovely. We were family, united for a single cause. What’s also great is you no longer see only the usual NGO faces. The middle class has shed its cloak of fear and apathy.

Much appreciated if PJ folks can be there
to help Kick start.
As for Seremban friend’s, time to let your
Action speaks louder than words. Pl be there too?

There has not been one day I havent uttered prayer for RPK and other ISA detainees and their loved ones. I must confess however, that since RPK was detained, it has tugged at my emotional fibre. I just love his testicular fortitude. He has it just what it takes. He is awe inspiring that guy.

The Democracy in the West was won because Brave Men & Women walked the long road to freedom with strong hearts believing they will together overcome the evils that Man do to others. To arrest someone & throw him into a solidarity confinement without trial is just so terribly evil & so painful for their loved ones. While Good Men are jailed ,the Crooks,Murderers & Corrupt & the Bad are running round free because of … high positions & power … What a Scandalous & Shameful State of Affairs ! Hope is in the hands of those who seek change……REFORMASI… Read more »

erm… I was wondering how come my comment appear the 8th comment (第三个星期的反内安恶法聚会 « 善良君子 I am Eve) here… I didn’t post any comment this morning… except I copy a picture here and put it on my blog as my face was capture in that last photo by [email protected] (orange shirt). :p It was really a great nite and I almost cried when I heard Marina telling us about her visit at Kamunting. Yup, me too, cannot help it. Trying to ask some friends from Keadilan Forum (http://keadilan.ws/forumcn/index.php) to join us. Some of them said they’ll try to get some… Read more »

the EX-ISA detainee is none other than Hishamuddin Rais and I managed to capture a short clip of his speech on video. It’s worth every minute. 🙂

Yesterday’s turn out drops a bit, but the spirit is still there. The YB from Klang is Charles Santiago, and after which YB Lau Weng San also spoke and he reaffirmed the crowd that the field belongs to MBPJ which is under Pakatan Rakyat, thus there’s nothing to worry about doing it weekly or even fill up the whole field. The ex ISA detainee who spoke yesterday is none other than Hishamuddin Rais!! He is very happy to see the crowd he referred as middle class, as he note that back then it’s only the poors who fights against ISA,… Read more »

The ex-ISA detainee, to whom Zorro referred to as “an old boy of Kamunting”, was rebel-with-a-cause Hishamuddin Rais.

The atmosphere was lovely. We were family, united for a single cause. What’s also great is you no longer see only the usual NGO faces. The middle class has shed its cloak of fear and apathy.

While we all celebrate Deepavali, lets make a promise we will be at the court in large numbers to give RPK the support.

To all Indians celebrating, Happy Diwali!

Congrats to zor made the ‘Commander-in-chief’ to the royal and undying supporters of RPK and the other ISA detainees.
Jesus once said, “if they refuse you entry, keep on knocking harder, eventually the door will open to you” (may not be the precise quote)

The Christian gentleman was none other than the one and only Father O.C Lim S.J. 🙂