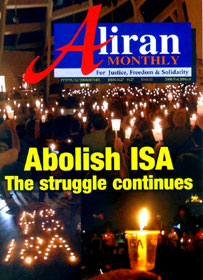 The latest issue of Aliran Monthly is now out. Meanwhile, the Aliran annual general meeting today has unanimously resolved to call upon the government of Malaysia to abrogate the Internal Security Act and thereby restore justice and establish the rule of law. The AGM also urged all Malaysians to rally together to oppose the ISA and other oppressive laws.

2152: Malaysiakini reports that nine people, including three Pas leaders, have been arrested for failing to disperse when police moved into a group gathered at another location  – a field in Ampang Jaya – since 8.00pm. The Abolish ISA Movement (GMI) had organised the event to launch an anti-ISA rally, expected to be held next year.

2143: “Did you guys catch the news of those … who paraded in the pro-ISA demo?” – SEOAdsenseThemes

News report say a couple of hundred people linked to Malay-based “NGOs” had gathered outside Wisma Sejarah, close to the Jalan Tun Razak police station, to lodge police reports against other NGOs such as Sisters in Islam and those campaigning against the ISA.

2130: The crowd is singing the national anthem now before dispersing.

2051: Young people are sharing their reasons for participating in the vigil.

2048: The same conditions as the previous vigil apply. A few cops stayed some distance for our protection, but lots more plainclothes holding camcorders and even taking down notes.

2028: Haris has expressed special thanks to the Datuk Bandar.

2022: Haris is now addressing the crowd.

Thanks 4 the update. Yes, we must continue like the Thais to pressure the government to abolish ISA. Knock some sense into those numbskull politicians. Must let more people aware of this draconian law. Keep it up.

I use to subscribe to Aliran, do ALIRAN need volunteers ?

Yes, we do need help now and then. Are you volunteering? 🙂 – Anil

Anil….there were people from Penang at the vigil. Still waiting for your presence to be felt.When?

My my! Did you guys catch the news on those hooligans who paraded in the PRO-ISA demo? They were agigated when a … woman recorded/took photos of their demo and proceeded to harass her. Luckily the police were there to hinder them…

Thanks Anil, I knew you would be providing this live update. You are beginning to be the only source of ‘live feed’…. 😉