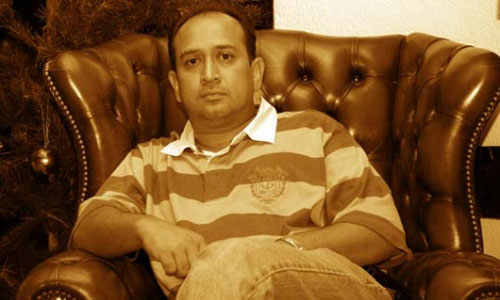 The man himself, blogger Sheih (photo courtesy of his blog)

People power is slowly but surely having an effect. Blogger Sheih Kickdefella has been released and he hasn’t wasted much time in updating his blog with an entry titled Sheih is back:

Hi folks, sorry for all the unreleased messages and comments. As you know, I have been away on holiday in Lokap Balai Polis Kota Bharu and Lokap Dang Wangi. I tried to check in at Pudu Prison but was turned away because not enough qualification.

I wish to thank all for the support and prayers.

The police have treated me well and most of the time, beyond the call of duty. I made lots of friends too.

Till then, rest assured, I have kicked Dollah again as soon as I was released. You can ask the press.

The Malaysian Bar’s EGM, attended by 739 members, has unanimously called for the repeal of the ISA and all preventive detention laws and the release of all ISA detainees. It’s six-point resolution also condemns the show-cause letters issued to several newspapers.  The resolution, also supported by the Bar’s four past presidents, will be handed to the Prime Minister on Monday.

Pushpa together with her son took to the podium and thanked the Bar Council and the Malaysian Bar for their support and assistance. She also highlighted the challenges faced by her, her children and all family members of the ISA detainees. Although she was visibly upset, she still managed to express her relief that Teresa had been released and was glad that at least one person’s prayers had been answered. Pushpa received a standing ovation from the floor when she completed her very touching speech.

Teresa Kok then took to the stage to a rousing welcome. She started by saying “I’m back!” She briefly highlighted the circumstances of her arrest and the 3 areas of questioning she faced during her detention. She then described the conditions of her detention. She questioned the need to detain her to answer questions about the three issues when she could have easily answered such questions at the police station. She then highlighted the ramifications of her detention to her personally and to investment opportunities for the state of Selangor. She said that she had on the morning of her detention held a briefing for investors from China and she had told them that Malaysia was a peaceful nation.

“Can you believe it? A day after I told these investors that Malaysia was a peaceful nation, they read about my arrest”, said Teresa, who ended her speech by thanking the members of the Malaysian Bar for their support.

Norlaila Othman, fondly known by many members of the Bar as Kak Laila, then came forward to describe her plight as a wife of a detainee who has been held without trial for six years. She first said that her husband was very happy with the visits organised by the Malaysian Bar. She then expressed her gratitude to her personal friend, Edmund Bon, who had been assisting her ever since her husband was detained. She thanked Edmund and his team for all their assistance and support. Full report from the Malaysian Bar’s website here.

Probably mindful of the groundswell of public opinion against the ISA, Rais Yatim is now suggesting, ahem, a “cautious review” of the ISA.

All this is great news, but Malaysians will not rest easy until all ISA detainees have been released and until the ISA and all oppressive laws have been repealed.

Power to the people!

Welcome back kickdefella. Apa la lu I think you don’t have enough frequent flyer points to masuk the main ISA hotel like our RPK and the Hindraf five. Never mind la keep working on it heh heh heh. People don’t realise we bloggers are not anti government as such. We bloggers just want a clean government, with government machinery running smoothly and a country which is relatively corruption free. We want the economy running smoothly and we want social justice for a Malaysians and not just the favoured few. So when the government is not delivering then we bloggers have… Read more »

Relaese HIDRAF!
RELEASE RPK!
No reason to detain them!!!
Show proof if you have against them!
Don’t tell lies anymore to us!!!

ISA should go. So much bad publicity is given to this Act that Malaysia is perceived as a ‘police’ state by the developed countries. Free the detainees and show to the world that democracy works in Malaysia. More often than not, ISA has been used for political reasons and this does not bode well for a democracy.

that rais, he cant even honour his own PhD thesis. Touch him with a ten foot pole at your own peril

Please kick “fomca”, a commentator out. His comments are treasonous and quite seditious too. Thx

isa must be abolish to open up the floodgates of democracy…the hundreds of detainees are there just because they want reforms ..awakening of the rakyat for a nation to be amongst the stars..the lost of time when this detainees could have contributed to the nations development by putting their thoughts into a big think tank data . i hope pkr will release them so they can put forward their ideology for the goodness and betterment of our nation..long may malaysia live as a multiracial country..syabas…

abolishment of the isa sedition .will bring malaysia at par with developed countries…the need to express..to share..will make our nation aware of democracy and will bring confidence from investor and put multiracial composition into multinationals and increase success of the smi…and doing away with preference and tiered banking loan will give every malaysian a chance to succeed and the nation leap ahead and amongst the stars….

Just as much as I would like to congratulate the Bar thus far I would also strongly urge them to take it the next level and have it completly abolished. It is time to move ahead and join the community of civilised people.

Kickdefella needs a kick in the butt. Stupid idiot.

Malaysians are thinking the whole situation is a complete TRAIN WRECK. Pak Lah is the head of government, BN and UMNO and so they single him out for blame. But blaming him does not explain why train wrecks happen in Malaysia. Many things happen because of Accidents. A train wreck happens when the engine breaks off from the coaches, which is an accident. People get in and then out of 6 by 8 windowless cells like hotel guests when the police do their own thing, also an accident. The police force (appears to be like) a runaway train when Syed… Read more »

Our brothers from the Bar Council have done the right thing. We hope the other bodies will do their fair share to deliver the views to the “sleepy one”. Enough is enough!