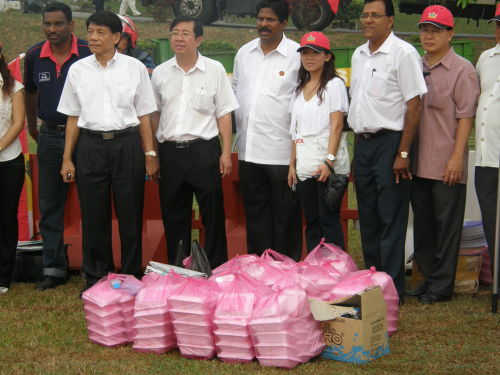 Where is Kin Woon?: Gerakan leaders and reps stand in front of what looks like a pile of food on Nomination Day (Photo credit: Abang Benet)

Gerakan central committee member Toh Kin Woon has quit the party and, by extension, the BN.

He will probably focus more on civil society work. He is a long-time member and supporter of the social reform group Aliran and chairman of the Penang-based Socio-economic and Environmental Research Institute (Seri).

This is what Kin Woon said over the phone:

I am currently involved in a couple of NGOs and in research and writing. In order to have the space to pursue this work in civil society more effectively, I am of the view that it’s best I am not involved in any political party. This will also save the party from any embarrasssment should my stand on any issue be different from that of the party.

I would like to place on record my deepest appreciation to all party leaders and members for their support and for the opportunity given to me (to serve the party). I leave the party without any rancour or ill-feelings. The friendship I built up with all of them over the years will be treasured. I convey my apologies for whatever mistakes I may have made and I wish the party all the best in its struggle for a better Malaysia.

Kin Woon ran into controversy over the last couple of weeks when he spoke at a launch of a book on Gerakan and when he attended an Anwar ceramah in Permatang Pauh – which ruffled feathers in the party. Gerakan secretary-general Chia Kwang Chye later offered him “friendly advice” not to attend anymore PKR events.

Kin Woon has consistently and vocally opposed the Internal Security Act and called for the release of all ISA detainees. Often calling for more democratic space for debate and dissent, he has also been supportive of civil society activities, including during his time in the Penang State Government.

As a Catholic/Christian convert, he believes strongly in the social dimension of the Gospel.

Why did our man of principles take so long? Why so slow?
Is he eyeing greener pastures on the other side?

Its good that Dr.Toh leave the “stinking”sinking ship since he has no baggage in the ship that is overloaded with goods compared to other Gerakan head like KTK and LKY.

Last but not least, congrats, Dr.Toh!!!

Congratulations Dr Toh for being able to abandon the sinking ship! GO on with your social work and I’m sure you get more satisfaction from your labour rather than being in a party where the members’ mouths are gagged by the UMNO goons. ALL THE BEST TO YOU!

To the other BN fence-sitters:

What are you waiting for?
Check your conscience and sense of honour.
It is high time to disassociate yourself with this
incompetent and corrupt regime!

i can’t help but be appalled at the picture. LOOK AT THE AMOUNT OF PLOYSTERENES!!! I wonder how much more there will be these few days to come! These politicians can at least start to take the initiative to be more eco-friendly. We are about a more sustainable environment now aren’t we?

“Resignation of the conscience”

mikewang … what bloody contribution is that????? for making penang more worse and less competitive? this man has no vision nor the leadership or the know-how to deal with the current century or the society of today.

he is a man of the 70s and 80s, let him retire and do his social stuff …can you guys please stop asking him to join PKR …

WE NEED TO MOVE FORWARD LIAW……

Looks like Gerakan jobs is to ta pau nasi. No power adi in Penang ..

What will be, will be, no matter what.

Anwar’s words have currency because he has put his liberty and reputation where his mouth is. I’m afraid good intentions and half hearted dissent, whilst still in power, is akin to not striking the lottery by a single digit: the end result is still the same.

Ah Chye( Kwang Chye) and … ( Hock Nam) still have hope for Gerakan but we Penangites have sinked all of them which included Ah Koon ( Tsu Koon) together.Penang has no place for Gerakan and it is better for them to go somewhere else to save them from further embarrassment.

Dr Toh,we wish you all the best in your future endeavor.

For the info of Tony and Fortified City and having known DR Toh Kin Woon as a senior on school and having crossed paths with him since he went into politics, I can vouch for the fact that the Man is a very principled person who does not suffer idiots and power mad nitwits who try to pass for intelligent and responsible politicians. Dr Toh has spoken out against many issues that he is unhappy about and his leaving Grakan and BN now is th tell these morons that their days are up and over. His walking out of the… Read more »

best wishes and lets have a dinner again.

my utmost respect for you.

Yes Anil, I can vouch for a fact that Toh Kin Woon is man of principles. I believe that he became a politician to fight for justice. Perhaps he thought Gerakan would provide him a platform for that. I am sure he felt let down when he saw the leaders of his party becoming impotent disciples of the masters from K.L. and it was better for him to resign. I am sure also that he means every word he says about his reasons for his resignation. He will no doubt be an asset to which ever civil society movement he… Read more »

Dr Toh has always stood out from the other run-of-the-mill “yes-man” politicians of Gerakan.
Only thing is: what took you so long, Dr Toh?

Dr Toh is a rare breed in BN politics, a man of high integrity and principle.

He should be given a state honour befitting his contribution to Penang.

The second man from Gerakan to have done the impossible. I believe they know what they have done is not probable but full of possibilities. The people’s interest were in their hearts. Hear hear!

He is a man of conscience and integrity. We wish him all the best.

He is just leaving the sinking ship that will hit shipwreck soon!
Welcome aboard if you want to.

so when is the Koh … going to close shop? the faster is the better lar considering the bloody party is so useless. for Toh KW also good lar you resign, in view that you are not exactly fit to be the type of leader that will take penang to the next level as shown in your so called track record with gerakan. social work is better for you lar…. but please don’t apply to join PKR, we want people that can transform economy, business and industries. gerakan and ex-gerakan politician all don’t fit the bill if you guys fit,… Read more »