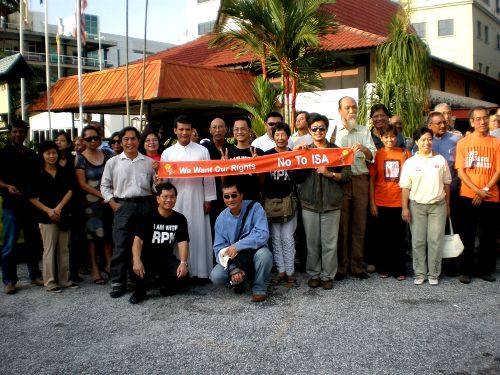 1356: Bank accounts have been opened with the bail money, partly contributed by supporters. Now waiting for court to open at 3.00pm so that all required documents can be submitted. All the accused will be out on bail once the process is completed.

1245: No one is allowed in the courtroom  while waiting for bail to be posted. Good Samaritans among the rakyat are going to open bank accounts (for bail money to be posted) for those charged.

Among those present outside court are Raja Petra, Rev Hermen Shastri and Fr O C Lim.

1106: The accused are being charged with participating in an illegal gathering and defying orders to disperse under Section 27(4) of the Police Act, which provides for a fine ranging from RM2,000 to RM10,000 and a jail term of not more than a year.

1101: Among the crowd in the court premises are five priests, who can be identified by their cassocks. 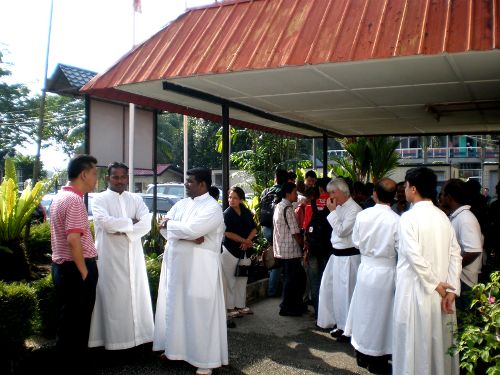 1045: Gobind is asking why his clients are being charged so close to Chinese New Year. He is asking for bail to be set at RM500 instead of RM5,000 and for their passports not to be impounded. Another lawyer, Lim Lip Eng, is now arguing for his clients.

1040: Inside the court room, Gobind Singh is now arguing the case. It’s a full house this morning.

1028: Bar Council president Ambiga, who popped out of the courtroom, mentioned to a few outside she was surprised the 23 people were being charged.

There seems to be a bit of confusion in court over the proceedings, bail, etc due to the sheer number of people involved.

0928: About 150 to 180 people are now in the Petaling Jaya Magistrate’s Court, where 23 people are expected to be charged in connection with their participation in an Abolish ISA vigil/Bersih anniversary commemoration on 9 November 2008. The court session has just started and many are unable to squeeze into the court room, according to [email protected] reporting from the scene.

Dear Fr. Paulino and activist, i am extremely overwhelmed you strong stand for the rights of the people. my prayers will be with you… let the Lord lead you in the righteous path…

you are a true follower of christ

i am proud of you

I am heartened to see all the good support for one another that enabled the twenty-three vigilers to be freed on bail, even though we all agree that they should never have been arrested and charged in the first place. As always, united in justice we stand tall together, and divided in lies and strife through ignorance we all fall in the end, one by one until we are no more. In fact, you twenty three vigiler arrested for standing up for justice against injustice might even catch people’s imagination all over the place so that your good act actually… Read more »

a threat to the nation?

Thanks all you lovely folks who turned up to show support and generously donated to help some of us who couldnt raise bail money. You were all such troopers waiting outside the courthse getting free sauna while waiting such long hours. Also to those not present physically but in your hearts and mind, sending us your positive vibes and prayers. God Bless.

As I said before, foreigners are allowed to hold demonstrations, and that too screaming and creating a ruckus. If you think otherwise, read the Anti-US and Anti-Israel protests organized by KJ. What hypocrisy, Albar. Little does he realize that anything he does now will be considered as VENGEANCE by BN against the rakyat. So best thing for him to keep quiet, and do what UMNO politicians do best, – “CLOSE ONE EYE”.
Hope that in GE13 in 2013, certain states have more sense than sending people like him to Parliament as MPs

To begin with, simply pick any of the accused, they would have studied more than most who tried them. Anytime, anyone has better manners and intelligent to know to know the diffeence between what’s right and what’s wrong. How can these group of people be a threat to the public or sorry to the Government? we are not even contesting on intelligence buy merely our simple rights as peaceful citizen of Malaysia. These arrogance and bullying tactics must stop. If the police have nothing to do, don’t assume everyone else have nothing better to do. Its shere waste of money… Read more »

our home minister hamid can do & say whatever…

Pls lah people, Palestine issue is a diversion from KT election and the Goverment thought by harping over Gaza, rakyat will think they have a heart. In actual fact they conveniently try to hoodwink the public and try to hide their own sins at other country expense.
If this Government is for real, released their own peacful citizens now! No? Clean you own back yard first. Sickening hypocrates.

I were there but left at 10.30am to attend other matter.
Med a lot of learned people and believe the govt is too too much
and high handed in charging these 23 people.Do we still trust this govt,the answer is yours!!

To add Eric, they even went to the extend of calling for an emergency Parliament session to discuss the Middle east war. What nonsenses? The issues within our own arena are just being covered up each time it pops up. The latest being Kugan’s brutality.

Anil, Thank you for the live update. Though I cannot be there personally but I want to know whats happening so that my prayers can be with them all the time. I know God will be there with them and give them all the strength and courage to continue to fight for our rights. I have no faith at all with the police, AG’s office and the whole BN Government. These people have nothing else better to do but to arrest and charge innocent citizens who are the brave ones standing up for their rights. We must be a laughing… Read more »

Great! Peaceful Malaysian demonstrators in our democracy are being hauled by the Police before the Courts.

Meanwhile, snatch thefts, burglaries, break-ins and even murders continue unabated. And most of these murders are not solved.

Whatever happened to the investigative culture of our police force? Did they lose it some time ago?

Indeed, we reap what we sow. And we will reap the wild wind because we sowed oats by arresting peaceful demonstators instead of snatch thieves, burglars, intruders and murderers.