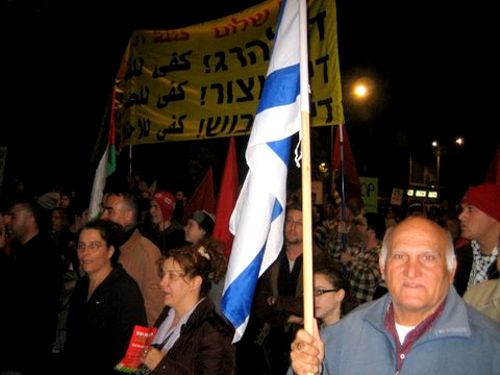 Some 10,000 Israelis took part in a huge anti-war march, a one-mile procession from Rabin Square to Cinematheque Square in the heart of Tel Aviv last night at the same time that the Israeli military began a bloody ground offensive in Gaza. Organisers were surprised at the turnout as only a thousand had taken part in a similar rally the last time the Israeli military launched a ground offensive against Lebanon.

Last night’s anti-war protest was organised by about 20 Israeli groups including the Women’s Coalition for Peace, Anarchists Against the Wall, Gush Shalom, Hadash, the Alternative Information Centre and New Profile. About a thousand Arab Israelis joined in. Protesters carried a giant banner, which read in Hebrew, Arabic and English: “Stop Killing! Stop the Siege! Stop the occupation!”

The peace marchers were later harassed by reactionary right wing forces, according to a report by Gush Shalom:

“One does not build an election campaign over the dead bodies of children!” shouted the protesters in Hebrew rhymes. “Orphans and widows are not election propaganda!”, “Olmert, Livni and Barak – war is no game!” “All cabinet ministers are war criminals!!” “Barak, Barak, don’t worry – we shall meet you in The Hague!”, “Enough, enough – speak with Hamas!”

The written posters were similar. Some of them paraphrased Barak’s election slogans: “Barak is not friendly, he is a murderer!” (The original Barak slogan says: “Barak is not friendly, he is a leader!”) Also: “No to the Election War, 2009!” and “The six-Knesset-seat war!” – an allusion to the polls which showed that in the first days of the war Barak’s Labor Party has gained six prospective seats….

On the day of the protest, the extreme Right mobilized their forces in order to break up the demonstration by force. The police made a great effort to prevent riots, and the one-mile march from Rabin Square to Cinematheque Square proceeded relatively quietly. However, when the protesters started to disperse, in accordance with the agreement with the police, a large crowd of rightists started to attack them. The police, which till then had been keeping the two camps apart, disappeared from the scene. The rioters then encircled the last of the protesters, harassing them, pushing them about and at a certain point started to besiege the Cinematheque building, where some of the last protesters had found refuge. They tried to break into the building, threatening to “finish off” the protesters, but at the last moment some police arrived and protected the entrance. The rioters stayed around for a long time.

Let us pray for liberty to the oppressed, for consolation for victims of violence and aggresssion, and for strength and perseverance to the peace-makers.

Anil, your prayers will avail not when one side believe in hate and destruction as a moral right and the idiotarian bleeding leftist pissniks refuse to view the situation holistically with moral clarity.