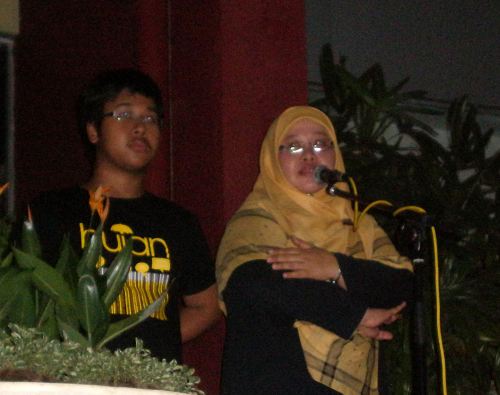 Norlaila, with her son by her side, shares her experience of having her husband detained under the ISA for more than six years 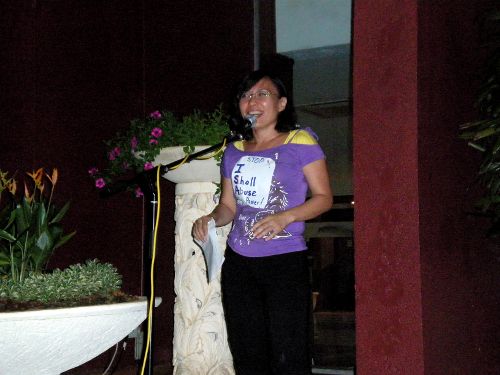 2400: As we parted, Benz says to me. “Tonight was something special indeed; more new faces, more new testimonies, more new insights into the rakyat’s hopes and dreams; in fact, every vigil night, there is something new and refreshing to take home.”

I couldn’t agree with him more. God is good and so are our bros and sis who are blind to race. It feels so good. See you all next week? Over and out.

2200: Well, its getting late now, the latest so far. Somehow, the crowd is reluctant to leave. There’s something special about tonight. Richard Yeoh once more leads us into our national anthem, Negaraku, and boy, it sounds a lot better now. No off keys this time, ha ha, it almost sounds as if it’s coming from a CD or tape recorder.

2135: Next comes a gentleman from the PKR. He speaks of the good old days when anthems were sung with such pride and unity among all races. What a contrast to today. It’s a sad, sad story these days… when we are plagued with ‘man-made’ problems.

It’s ironic, isn’t it? While other nations battles with natural disasters such as earthquakes, hurricanes, tsunamis and droughts, we, in Malaysia, have to contend with problems created by ourselves.

A woman speaks of the fear of standing up to be counted. She encourages her friends to come for the vigil and shares with us how many others are being either ‘brainwashed’ by fear or living in bondage.

Another speaker, Lokman, asks that the momentum of the vigils be sustained. Have faith in the rakyat playing their part, he says. He has experienced the change and is convinced it’s already working. The good news is that many more Malay sisters and brothers are coming out now.

2110: After Norlaila comes the next surprise! Most of the crowd are caught unaware… not by the FRU but by the presence of a brave lady.

Remember the incident where a woman was chased by pro-ISA supporters belonging to various “NGOs” last week? Well, she is at the vigil tonight. Want to guess how the crowd responds? Camera flashes pop all around and voices of appreciation are heard.

Yes, Ms M (as she wishes to be known) relives the horror of being punched, chased, and kicked at for voicing out her beliefs. Yes, she was alone that day. She recalls there were a few banners with “‘unbelievable and outrageous words” on them.

Just imagine, here we are, peaceful, logical rakyat, holding vigils calling for the abolition of the ISA for the sake of humanity in a controlled, confined compound with no candles and no banners. And there they were, not only grossly indifferent to such views but actually out on the streets, supporting the ISA in broad daylight, with numerous banners! Some of their slogans sounded racist and ‘sensitive’. Boleh kah? or double standards, overlooked again by the authorities?

As she was ‘moved’ beyond her usual self, she responded spontaneously and demanded answers from the crowd. You know how they responded. But God intervened and she was safe.

Words here can never describe or do justice to what she experienced. That’s why we urge you people to come hear for yourself to see if you really know what has become of this nation.

2103: Close to 200 people have turned up. Norlaila’s speech is being recorded by Big Brother.

2040: She pauses, choked with emotion. The crowd comforts her, saying, “It’s okay; we understand” and “You are not alone” and “We are with you”.

2035: Her son was only four years old when her husband was arrested. And she didn’t know how to answer him when he asked her where his father was.

2031: Norlaila shares how she was ostracised by family and friends after her husband was arrested.

2026: Norlaila Othman from the Family Support Group of the Abolish ISA Movement (GMI) addresses the crowd.

I told “M” after her speech that perhaps she could learn some karate so that next time, when those BN thugs kicked her again, she could counterkick. She took me seriously and said that if she were to do that, she’d be killed. This indicates that she was very much aware of the danger, which made her stance against injustice even more courageous.

thanks for the feedback. missed this night’s vigil as i was back in my hometown to celebrate my dad’s 80th birthday.
my hats to Ms M for showing the courage to defile the nonsense of that group.

Bravo, Ms M! I was just looking at the photos snapped at the Pewaris rally which prompted her to grow to her full stature as a mature citizen and admonish the crowd about the pernicious and twisted kinds of people who would even consider participating in such an unwholesome event – and the grotesque partiality of the PDRM who not only did not break up the Umno-sponsored show of Tempurung Power, but most probably issued them a permit on the spot! What an ADMIRABLE woman… woot!!!

Thanks, Anil for your reliable live feed! Very much appreciated.