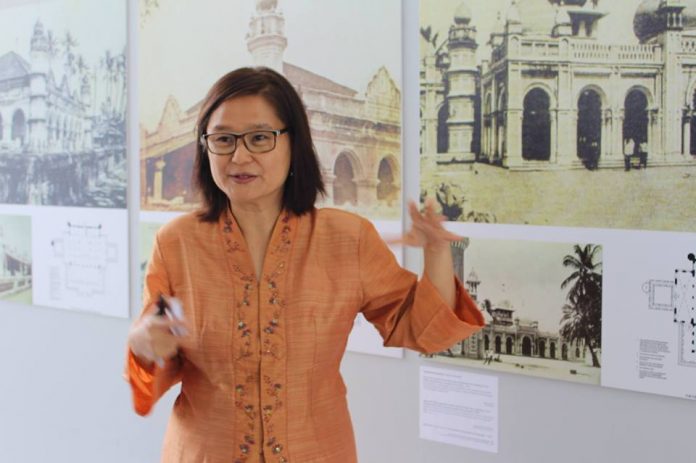 The local government in a democratic country should enjoy the autonomy and possess the integrity to make its own policies, rules and guidelines, city councillor Khoo Salma Nasution told a full council meeting of the Penang Island City Council in a landmark address this morning. “The council should ensure its own rules are not compromised, that they do not need to bow to the developer’s logic, to all sorts of development pressures or to political pressures, just because Penang is a ‘land-scarce’ state.”

This is Khoo Salma’s full address. (The Malay version can be found below.)

I was nominated by Penang Forum to be the representative and the voice of NGOs, including Penang Hills Watch, in the Penang Island City Council from early this year. My predecessor Dr Lim Mah Hui served with the council for six years.

When I was made a city councillor, it was a dream come true – it gave me the possibility to contribute towards a greener, cleaner, heritage-conscious, sustainable and inclusive city. The council is the local planning authority that guides city development and therefore has a huge impact on the life of its citizens.

As a new councillor, I was surprised to learn that certain policies and guidelines are made at state level and then passed down to the council without discussion, with a note “For information only”. As a new councillor, I tried to discuss topics such as road projects, development density and hill development. However, I was told that projects and guidelines which have been approved by the State Planning Committee are not to be questioned.

In other words, the local government in a democratic country should enjoy the autonomy and possess the integrity to make its own policies, rules and guidelines. Would you agree that this is in keeping with the idea of local democracy?

According to the State Structure Plan, development is not allowed on hill land more than 250 feet above sea level or more than 25 degrees gradient. However, many hill development projects are exempted as they are regarded as “special projects” by the state government.

Applications for planning permission for hill developments are referred to the state-level “Risky Land Development Committee” according to the Safety Guidelines for Hillsite Development 2012. This committee apparently shows the way to the applicant to fulfil the technical guidelines. If all the technical guidelines are met and all or most of the department approvals have been obtained, the council will usually approve the application.

Datuk Bandar, SU and respected councillors, I believe that we need to discuss development issues more thoroughly and advice the state government on suitable policies, rules and guidelines. The Penang Island City Council is a body which has all the expertise and technical experience to handle physical development planning.

The council should ensure its own rules are not compromised, that they do not need to bow to the developer’s logic, to all sorts of development pressures or to political pressures, just because Penang is a “land-scarce” state. At the very least, the council’s rules and guidelines must obey the Penang Structure Plan, as well as minimum safety and environmental guidelines.

In an advanced country, applications for planning permission are openly displayed and can be examined online by anyone. Public consultation of the broadest kind is held and any adverse impacts on the neighbours or the environment can be objected to by any affected parties, not those only up to 20m from the project boundary. Why not here?

Managers of smart, international, sustainable and liveable cities must have the objectives and methodology to evaluate environmental impacts, traffic impacts, social impacts, heritage impacts and to take into consideration public feedback.

We have to improve our planning processes and be prepared to change the direction and pattern of our urban development so that our heritage and environment are not destroyed just for the sake of building half-empty condominiums.

When development is not planned according to the right principles, disaster is likely to happen. When floods happen, as on 15 September, the people will not think it is only an “act of God”. On the contrary, the people are going to blame the authorities who have allowed the hills to be cut and who have approved the excessive development which cumulatively raises the flood risks in affected areas.

It is said that the project site in Tanjung Bungah where the landslide occurred is not to be defined as hill land. If so, let us imagine the additional risks that could arise from development on hill slopes that actually exceed 250 feet above sea level or 25 degrees gradient. Does the council have the monitoring capacity to ensure the safety of such sites for 25 years, what more 50 years?

A Cleaner, Greener Penang is not just an empty slogan. It is a commitment to the future generation. Climate change is upon us. Extreme heavy rain and floods will be the “new normal”. Slope failure and landslides, unfortunately, will occur with greater frequency. In such a situation, we cannot get back to “business as usual” because it is reducing our resilience, and threatening the future of the Penang that we love. We must change.

As a first step, I wish to ask the council to impose a moratorium on hill developments and reassess every hill-site and hill-slope development project.

Secondly, I ask the council to reaffirm all policies, processes, and guidelines to protect our hills and stop high-risk development and to make new rules if necessary, taking into account the findings and recommendations of the Report of the Penang State Public Accounts Committee on Management of Hill-site Development.

Lastly, I ask the council to introduce new planning rules so that every development project should take into account the public interest, environmental interest and the interest of affected stakeholders and neighbourhoods.

All this should be done with full responsibility towards the future generation, to those whom we have promised a Cleaner, Greener Penang.

On the 2nd. Nov 2017 at 1:18PM, a reputable online news provider, The Malaysian Insight had published my opinion article (op-ed) under the Insight section. I had assiduously dissected from the constitutional & administrative well-enshrined legal principles, the functions of Representative Democracy & Elected Representatives Duties and the oft-repeated sentence of Abraham Lincoln’s Gettysburg Address pertaining to representative governance, accountability, moral responsibilities & public duties inter alia other topics and subjects. It is undoubtedly with the same resonance that the honourable Chief Minister of Penang had sedulously laid down the Penang Peoples Budget 2018 as reported on 2.11.2017 in the… Read more »

Feemalaysia mentioned ahok not Indonesian ahok but pg lang hock e. Tan skinny kid from pg moves his billions from singland to uncle Sam. He went to white hse and shake hand with president. Pg dire of opportunities except to work in rumah tumpangan, budget hotel or backpackers. Uncles and ah peks no need to worry. They retiring, lim kopi and blow water to cool it and spend their retirement money.

Behind Broadcom’s move from Singapore to the US, a CEO who grew up as a ‘skinny kid’ in Penang. http://m.todayonline.com/singapore/behind-broadcoms-move-singapore-us-ceo-who-grew-skinny-kid-penang Mr Tan Hock E, 64, recalled that he was “just an 18-year-old skinny kid, growing up in Malaysia” when he won the scholarship to MIT, and that his parents could not afford to send him to college. “It’s really amazing to me, even today, that this great American educational institution took a chance on me, sight unseen, and gave me a scholarship to pursue the American Dream,” he added. “So my appearance here today, in large part, has been inspired… Read more »

Of course pg will continue to lose its talent if we still continue to have rumah tumpangan, backpackers and budget hotels. This is what older pg lang wants? No future for pg kia and for pg ah pek is to continue to lim kopi and blow water.

The state government has extended an olive branch to the Penang Forum despite the latter’s harsh criticism of the state’s handling of floods and landslides in recent months. State Housing Committee chairperson Jagdeep Singh Deo said the state practises an open door policy where everyone can come and interact with the state authorities if they have well or noble intentions to help Penang. The state has been listening to ratepayers and the civil societies since 2008; nothing has changed and the state will continue to listen and it is not because the general election is near, Jagdeep stressed in a… Read more »

Go and retrace pg structure plan by Gilakan in 2005 to 2020. Dr koh said there will be a tunnel and fast hydrofoil between island and mainland. Why pg forum don’t question that?2005 was before 2008 when penang become a unesco city and now brings planes from Qatar. Penang structure plans by Gilakan assumed life and pace is at snail pace and people are still riding boon siew kapchais. Time has changed. Ah pek is driving 4was. Now more cars and Chinese people and Singland are buying properties in penang. In 2005, Chinese people cannot afford to fly to penang… Read more »

A very well delivered speech for change. Well done. ONe needs to educate the public on how local gov works and its shortcomings.

Bringing up the idea of local democracy is a bit disingenuous here – the councillors of the Penang Island City Council are appointed directly by the state government, not elected by the people. They haven’t been democratically elected in over half a century.

Ask Putra J why local elections not allowed in pg and all over the country?

People expect the local government to adopt new ways, but it is the federal government that has been burdened us with outdated policies and inefficient bloated civil service. Just my opinion based on my experience.

There are no reforms and Calvin knows about it and wants to keep overlording us. No of non bumis are getting less and benefits for them are getting less too as costs are going up and their numbers are getting more. More people are employed to admin the country and not in producing goods. To look nice, Calvin and shiess love see bangla, Nepali, Indon as cheap labour. Don’t forget one day bangla, Indon will join rank and will not be non bumis. More people will be eating the same cake

So is the Penang State Government, the State Council and the Penang Island City Council going to isten or will they … in Khoo Salma’s face?

Relocate the airport to kedah and impose tolls or charges on all cars, vans and kapchais going and leaving Pg island like singland. Pg forum don’t mention Zero car and motorcycle growth. All lands are used for roads and parking and wasting pg limited resources. How much usable land pg has? No one can tell even pg forum? How to plan for second and third generation.

Fundamental changes required;
– Local elections – remember the DAP and PKR promise.
– Judicial rulings that hold local and federal authorities liable for loss, injury, etc. in general (whether caused by a “contractor”, “GLC”, etc.) – remember the “ikan bilis” punished for Highland Towers.
– Grassroots education on fascism – there is no hope of psychopaths exposing their own insanity.