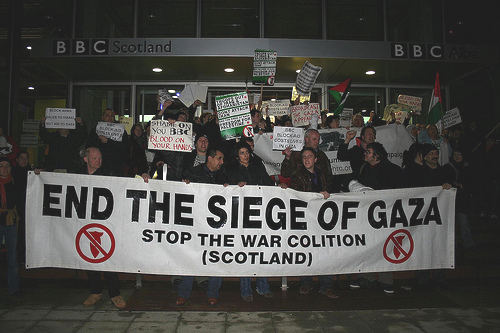 About 50 activists occupied the BBC Scotland headquarters in Glasgow  on Sunday, 25 January, to protest at the BBC’s failure to broadcast a Disasters Emergency Committee appeal for Gaza.

The DEC is made up of 13 aid agencies, which are leading UK registered humanitarian charities that fulfil certain criteria.

The Committee is traditionally supported by “a network of television and radio broadcasters, the banks, the Post Office, BT, regional and national press and a range of organisations in the corporate sector”. The idea is “to rally the nation’s compassion, and ensure that funds raised go to DEC agencies best placed to deliver effective and timely relief to people most in need”.

Among the activists who occupied the BBC Scotland headquarters was John Hilley, who has written in the past for Aliran Monthly. Here is his account of the “occupation”:

Last night (25 January), saw our inspiring occupation of the BBC in Glasgow in protest at their decision not to air the Disasters Emergency Committee appeal on behalf of Gaza.

We simply managed to walk in to the lobby of this sleek glass building and unfurl our banners, flags and placards before the police arrived in a panic to seal off the main doors. We also let some other late arrivals in through a side door (pictures here).

Spirited chants filled the lobby as staff and police considered what to do. The message was aired loudly that the BBC are complicit in the war crimes against Gaza, and that their decision not to allow the DEC Appeal shows them in their true establishment colours.

After an hour or so, a senior police inspector announced that we had 15 minutes to leave or be arrested. We refused, explaining that this was a peaceful, moral protest in support of the 1.5 million already imprisoned and suffering in Gaza. Glasgow human rights lawyer Aamer Anwar arrived to offer advice and support to the gathering.

Various media outlets, including the Independent, started calling on mobile phones asking for comments, while others arrived outside the locked doors – such publicity being the principal point of the occupation. Yet, ignoring our calls, the BBC had itself still failed to put any of its reporters on the story. The irony hardly needs stating: no need for the BBC to arrive when they’re already in the building.

At this point, Tony Benn called to express his support and his words were read out over a mobile to loud cheers. Other calls of support were received from George Galloway, Stop the War and activist groups all around the country.

Eventually, Ian Small, the BBC’s Head of Public and Corporate Affairs was brought in to handle the matter, and our group nominated five people – including myself – to speak with him. Mr Small, I think it’s fair to say, offers perfect insight into how such people get to be where they are at the BBC.

During our meeting – which we insisted take place in transparent observation of our group rather than the back room he had demanded – Mr Small was reminded of our movement’s previous letter passed to him itemising the BBC’s brazenly pro-Israel coverage of the Gaza crisis. No formal response to that 9 point statement has yet been received.

We then asked Mr Small to explain the BBC’s decision to disallow airtime for the DEC Appeal.

What we got, predictably, was a set of template assurances that ‘our concerns would be registered’ with BBC Director Helen Boaden et al – a useful moment to relate, in turn, my own experience of this token procedure. While accepting that the BBC ‘doesn’t always get it right’, Mr Small denied my assertion of deep institutional bias, resorting again to standard claims of BBC ‘impartiality’. I also reminded him that many staff at all levels of the BBC are outraged by their employer’s decision.

Listening to Mr Small uphold the BBC’s statement on the DEC Appeal – while declining my request to have him air his own view on the matter – brings home the quite alarming capacities of such people to defend the utterly indefensible.

Our more pertinent demand was that the BBC come and report the protest occurring inside their own building. Mr Small agreed to convey this request to the newsroom, but could not, he said, guarantee that the protest would actually be covered. It would be “unethical”, he thought, to try and exert such influence.

A further meeting with senior BBC Scotland directors was secured. But, personally, I see little purpose in sitting in plush-panelled rooms speaking to power in this way. The real point of this action was, and is, to maximise support for Gaza and shame the BBC over its brazenly partial decision.

Having voted to leave the building, our objectives achieved, a number of press outlets – including the BBC – were waiting outside to cover the emerging, cheering crowd.

This action illustrates the real value of direct, peaceful civil disobedience. It also alerts us to the ways in which organisations like the BBC seek to manage dissent through such sham consultation. And it reminds us, in this desperate time for the people of Gaza – and the West Bank – that all these small protests are having a cumulative effect in drawing the world’s attention to Israel’s barbaric behaviour and the deeply distorted reporting of it.

Because 99% of rockets shot into the civilian areas of Israel don’t hit people they should be discounted. What utter nonsense, Ham mas puts civilians in harms way for this very reason. Here in lies the difference, never will you see Jewish Mothers dancing in the streets to celebrate the death of Palestinian Children, but there is no end to the thrill of Palestinian Mothers when Jewish or there own children are killed. How quickly you support the cause of Ham mas and deceive your selves by saying you only want to support the people of Gaza, more nonsense. Ham… Read more »

Good to know there are people in the West still showing concern for the Gazans. If they don’t shoot some rockets once in a while, their suffering will be totally forgotten. 99% of the rockets don’t hit a darn thing anyway. Many more people die from car accidents on Israel’s roads than from Palestinian rockets.

Shame on the BBC. Unfortunately, here, we have no direct way of showing our displeasure. Subscribers to Astro, which carries BBC, have no choice because of Astro’s bundling policy. Is it possible for some civil society organisation to take the lead to demand that Astro unbundles, so that subscribers can then exercise their freedom of choice. We can then stop subscribing to the CNN’s and BBC’s and take al-Jazeera which has had exemplary coverage of Gaza — and not only that, as they have had very good coverage of our region as well. Now, Mahathir, instead of proposing some half-thought… Read more »

I strongly feel that BBC should continue to maintain its neutrality. At this time, emotions are running high due to the wrong reasons. Never has BBC come out to broadcast fund raising for any related disasters. So why should it be considered as BBC’s failure to broadcast a Disasters Emergency Committee appeal for Gaza? It should be BBC’s strengths in maintaining its stand to its true values and integrity. Good job, BBC!

Not one word on Radio 4 about the Glasgow occupation though plenty on the blogasphere.
Now it turns out that Mark Thompson’s wife Jane is (apparently) not only Jewish but an Israeli sumpathiser, and the question is being asked if this influenced him?
If it did then he should no longer be in his post.

How nice if i could occupy CASP.. haha

Al Jazeera is my choice among the three main international TV news broadcasters. None of this disgraceful biasness and more insightful coverage.

I sometimes wonder why the BBC employs newscasters with non British accents. Is it a token attempt to portray itself as being neutral and impartial?

What are these people trying to say? That firing rockets is okay? Trying to stop these rockets from being fired at you is “not okay”? Hiding among the civilian population and putting them in danger is okay? Inciting violence against other peoples from young is okay? When these other peoples retaliate is “not okay”? Finally, when all that money is collected and sent to the West Bank, who gets to make use of all that donation monies? I bet that will be the political & militant arm of Hamas. And a significant portion of these monies will go into buying… Read more »

Here we cannot do lah, after kena tangkap or get chemicals sprayed on you.