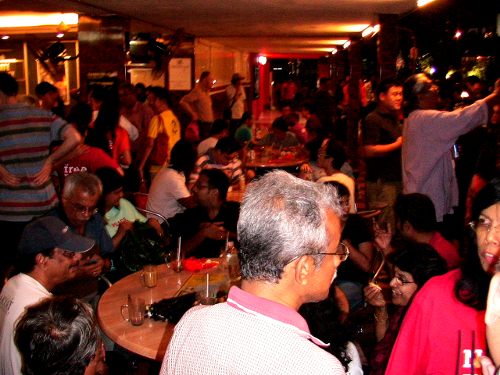 After the potluck at the MBPJ premises was disrupted, participants moved it to the Lotus Restaurant opposite – Photo by Man with d Video Cam

“Too many troops spoil the soup.”

Indeed last night’s PJ Abolish ISA vigil, pot-luck style, caused so much confusion amongst many of the rakyat who came prepared with home-cooked food to share with everyone.

Instead, at about 8.20pm, an operation to ‘lock down’ the PJ Civil Centre turned it into a ‘centre of shame’.

“I had some food specially prepared for this occasion and to see how this entire operation took place is simply outrageous,” commented one of the rakyat.

First, the authorities were jittery about lighted candles; now food? What’s next? More than a hundred police and FRU personnel were deployed to monitor some 150 ordinary citizens armed with plastic forks and spoons. Roads were blocked and traffic diverted. I stood there amazed at the sheer extent of the police operations. It was massive.

Some commotion could be heard amongst some police and the City Hall staff. Confused folks were walking out, others just walking in, and still others just stood at the entrance with trays of food in their hand.

This time round, the police officer in charge gave stern instructions. Not sure how many minutes was given but no questions asked, no clarification needed, simply not interested in hearing anything from anyone… Just disperse dengan segera!

So, as always – the rakyat obeys the law as demanded of them. While people were walking away, police were recording names and ICs from unsuspecting individuals. Police with camcorders and cameras filmed and snapped away.

Not content with surrounding the place, the police even said it loud, “Sekiranya tuan-tuan dan puan-puan tidak bersurai, kami akan menggunakan KEKERASAN untuk menyuraikan anda,” declaring out loud that they would use force on peaceful people.

While we were packing up all the food we had paraded on the floor earlier, they even said we had another 30 seconds left before they would charge at us.

After we all moved to the Lotus stall, they were still not satisfied; they sent some traffic police who began to write out ‘saman’ tickets to cars parked on the roadside beside the stall. Plainclothes police even followed us inside the stall.

So who said the police is short of personnel?

No untoward incidents were reported last night, thank God. One question still remains: Is PJ City Hall under the police?  If PJ City Hall gave the rakyat its blessing to use its permises, why is a permit needed? I suppose we need Einstein or Newton to figure this out for the rakyat. Its a shame the rakyat and the police have to go through all this nonsense; it’s simply a sheer waste of time and resources and erodes the trust the rakyat, who through their taxes help fund law-enforcers’ salaries, have in the police.

Some one should ask the home minister if he ordered the crackdown or if he knew of the crackdown. Someone has to take the responsibility for such irresponsible harassment.

Politicians flexing their abusive muscles cannot hide behind the police.

Admittedly on arahan atasan (orders from above), the latest action of the Malaysian Police against a peaceful gathering of Malaysians asking the Government to “Repeal the ISA” displays the thriving bully culture. The draconian Internal Security Act that allows detention without trial has been seen to be more abused than used, especially at the height of the so-called Operation Lalang in October 1987. Instead of bullying the rakyat or people, the Government should demonstrate that it is enlightened enough to empower them. Kuala Terengganu shows the paradigm shift. Different people react differently to bullying. Some marginalise themselves, some smile, some… Read more »

If insufficient of forks and spoons…pls use straws.

mugabe style from hamid and chor?

no wonder, mana cukup polis to rein in high crime rate. cry some more lah, chor that its all perception.

GE13 comes and i hope you will be kicked out…

Does our intelligence Challenged Home Minister and Koya Kutty not realize that these are the actions that resulted in 3 slaps in a row to BN and UMNO? Koya Kutty still believes it is the wrong BN candidate. How can there be any post-mortem for every BN election lose when Halbar and co are all in a state of denial? The more Halbar uses tough and rough tactics like this, the more the seats BN will lose. The more they ignore these vigils, the less will be the negative impact to UMNO and BN. UMNO / BN has lost the… Read more »

They are merely executing the ‘orders’ from the …, please forgive them.

Anyone caught supporting Umno/BN will be deported to Mongolia dengan segera. There the Mongolian authorities will put them to work compressing yak dung for fuel. They will only be allowed to return when the person who ordered Altantuya’s gruesome murder is publicly named & banished forever from human society.

I was there with my husband and friends but what we saw was a total arrogance and ignorance from the so called “pihak atasan” – as what the police are saying. When we want to organize any gatherings, we need to show many documents. But what did the police show us yesterday?? By right they should have presented us a letter or even tell us know by what Act..oh wait a minute…what is happening here with “By right?? Whatever the police do is right. So shameful. To good policemen out there, sorry guys..you are making us to think that all… Read more »

They were rude…rude…rude….. How could the police force whom should be protecting the Rakyat behave in this manner? Felt like we were some terrorists when they came in barging in their helmets, batons and shields. Whereas, we were holding KFC, cupcakes and mandarin oranges. People walking in thousands marching and burning flags, supporting the real terrorists, the PDRM shy away. What double standards? Sadly, no lessons learnt to-date.

I’m not sure whether you were inform about it or not, The 23 arrested on the PJ Vigil / Bersih Anniversary will be charged on the 22nd January 2009 (Thursday) @ 2pm – PJ Court.

Most of us got the call from the Police Officer in-charged last Friday and also today. Do remember us in prayers on that day.

Not enough with surrounding the place, the police even said it loud “Sekiranya tuan tuan dan puan puan tidak bersurai, kami akan menggunakan KEKERASAN untuk menyuraikan anda” declaring out loud they will use force for peaceful people. While we were packing back all the foods we paraded on the floor earlier, they even said there’s another 30 seconds left before they will charged at us. After we all move to the Lotus stall, they were still not satisfied, they send some traffic police and begin to give SAMAN ticket to cars park on the roadside beside the stall. Even those… Read more »

“Not sure how many minutes was given but no questions asked, no clarification needed, simply not interested in hearing anything from anyone… Just disperse!”

Anil, the plainclothes officer said “segera” which means “immediately” if I am not mistaken.

They still haven’t done a post-mortem of KT so they dunno the message yet, Anil.

In all future gatherings, think the way out is to get a police permit. Also to clearly state in the Police Permit Application that the aim of the gathering includes “protest … people of Palestine…. Bosnia, Iraq…” and in small print Abolish ISA…
the Application should be preferably done by a Palestinian studying in Malaysia.
Surprisingly, foreigners are allowed to stage and take part in Protests in THIS COUNTRY (as for the recent protests against US and Israel organized by KJ & Universities), but as citizens we are harassed by police. Hmmm…