Apparently, the “Abolish ISA” chanting could be heard from inside the Malaysian High Commission in London. Foreign Minister Anifah got out of his car and came over to talk to those at the vigil for about half an hour. 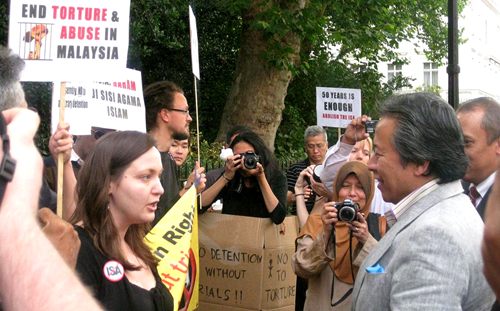 Those who were already inside the High Commission waiting for his speech to them, apparently ended up waiting for quite some time.

0030: A group of about 30 people are protesting against the ISA outside the Malaysian High Commission in London.

They are hoping to catch Foreign Minister Anifah Aman, who is on a 10-day visit to Germany and the UK from 1 August. Anifah is expected to meet Malaysian community leaders and students in London to brief them on current government policies.

Many of the protesters seem to be new faces, according to an eye-witness. They have a loudhailer and are chanting “Stop detention without trial!”

A reporter from Six Oranges, a London-based film outfit which makes films on social issues, is present; they are making a documentary on the ISA.

Over 1800 people have died in Malaysia Police Custody since 2003 ! This is really ALARMING !!! One death in custody is one too many. The Malaysian Govt must be sincere and say it out loud that we as a Nation will not tolerate such high figures ! The victims are not just numbers but some one’s son,daughter,husband and loved ones. No civilised Country will tolerate such frightening high figures……almost like killing fields ! Thank you all who protested as hopefully oneday Malaysia will be free again ……and the GOOD People of M’sia will not fear anymore about being detain… Read more »

Is he genuinely too busy for updates of things happening back home – Malaysia’s Foreign Minister?

Well, nevermind whatever the reasons, at least he braved the protestants, went across to speak with them so unlike the Sarawak Chief Minister Taib Mahmud who scurried off for cover through the back door like tikus, in Oxford two weeks ago!

There’s certainly nothing enshrined in the Constitution which says that Malays are entitled to discounts for luxury properties costing millions of ringgit.The ‘special position’ of the Malays also does not extend by definition to such discounts or privileges, or one could then make the incredulous argument that as a result of the ‘special position’, Malays will even be entitled to constitutional discounts for purchasing BMWs, Porches, home theatre systems, first class air tickets or even jewellery and precious stones. The discount for the purchase of luxury properties is one of the clear cut abuses of the New Economic Policy which… Read more »

KEEP THE FLAME GLOWING! IT STARTS WITH A SPARK AND HOPEFULLY, IT WILL SPREAD LIKE A WILD FOREST FIRE…MOVING FAST AND COVERING WIDE….

ANIL did not create this distasteful problem, UMNO goons did!

Anifah looks very smarmy in the pics, the message probbaly didn’t get across his hollow UMNO head.

Umnoputera has been trained to be ‘tak malu’ from confronted by foreign media over alleged corruption.

“The whole world is watching”

Are they old people and children?

According to some, that’s an abuse of human rights, presumably because one is senile and the other is too young to think and they don’t have all the facts i.e. they are prone to confusion.

Well, let’s hope the documentary shows otherwise, or you’re in for another round of bashing, Anil.