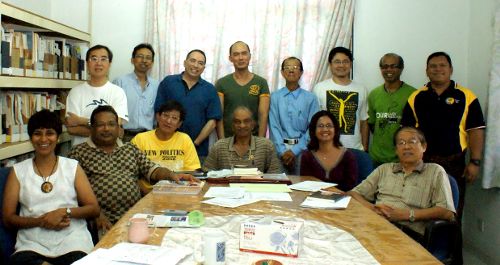 Here’s a message from the folks in Aliran to all of you:

For over 30 years, Aliran has been a beacon for Malaysian society in many important ways. Aliran provides a rallying point for citizens and civic organisations concerned with freedom, justice and democracy. Aliran defends civil liberties and human rights, and promotes inter-ethnic and inter-religious respect. More than that, Aliran advances the causes of marginalised communities, disadvantaged groups and persecuted individuals who are too often bereft of any opportunity to speak for themselves.

To carry out these tasks, Aliran depends on limited financial resources derived from Aliran Monthly subscriptions and sales as well as donations made by our members, subscribers and other well-wishers. Our writers, members and other supporters receive no payment for their tireless services.

For our operational expenses, we receive no funding whatsoever from any government or opposition political party, corporation or foreign source. We intend to keep things that way to safeguard our autonomy.

The cost of producing Aliran Monthly, disseminating information and publications, networking with other civic organisations, and organising public talks and forums has risen considerably. In truth, we are incurring deficits every month.

To maintain our crucial public service, we sincerely appeal to you to respond in any of the following ways:

If NGO’s become profit based centre, then the people might accuse them on robbing peoples money or being corrupted.

Sometimes looking at the same thing in a different way can help to clear-up potentially muddy waters. Everyone who carries on a value-creating trade of any sort inside of a capitalist financial market system is in a bilateral relationship of supply/supplier and demand/customer. A charity/NGO is a SUPPLIER/PROVIDER of social products and services (to various beneficiaries/consumers/users of those products and services) to meet the demand for these social products and services from CUSTOMERS/PURCHASERS i.e. the charity’s/NGO’s donors/funders. Whether you are a business in the private/commercial, public/government, voluntary/charitable or not for profit sectors, every business is dependent on income and cashflow… Read more »

Guys, first many thanks for your works and contributions to the malaysian society. I personally think that for any enterprise or NGO for that matter you need to strive for sustainability. Sometimes people condemned enterprises for making profits and there are also people that says that if you are making profit that means money comes first before the social objectives or before the good of the many. I think all these people are largely misguided people. In the world we live in, everybody and every institution is working hard to ensure continuation. Making profits which led to long term sustainability… Read more »

Thanks for reminding – I need to renew my Aliran subscription.

In all the years before blogs and Malaysiakini, Aliran Monthly was one of my few sources of reliable, independent opinion on Malaysian political and social affairs. For that, I shall always be grateful to the people who kept Aliran Monthly alive.

Malaysian NGOs for the most part, are no different from the beggars on the street, begging for money. This needs to change. NGOs need to figure out how to run their organisations as a profit-centre. Begging for hand-outs and depending on the goodwill of people long-term is not a sustainable strategy. If NGOs cannot even stay financially solvent without depending on handouts, how can people trust you and your activities? Your independence is compromised as you are at the mercy of the people who fund you, whose agenda you may have to follow. NGOs should meet up with entrepreneurial consultants… Read more »